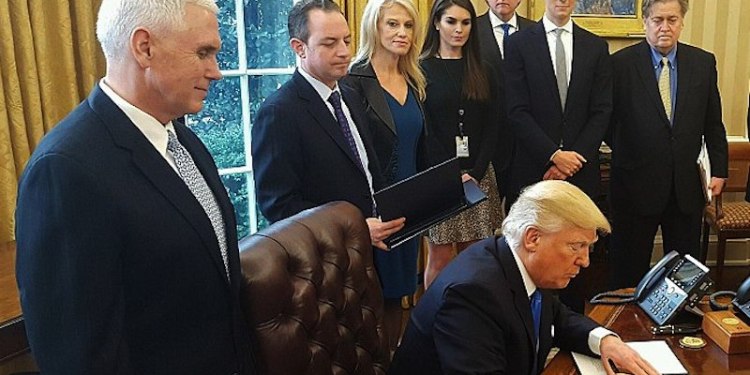 All but two of New Jersey’s representatives joined the majority of U.S. House members in voting to hold former White House adviser Stephen Bannon in contempt of Congress for refusing to comply with a subpoena from the select committee probing the Jan. 6 Capitol attack.

“Refusing a subpoena is obstructing justice,” Rep. Bill Pascrell (D-9) said in a fiery House floor speech prior to voting yes on H.Res. 730.

The measure, which passed the Democrat-controlled House Oct. 21 on a 229-202 largely party-line vote, holds Bannon in contempt of Congress for refusing to appear before the panel and refusing to furnish requested documents about the attack by then-President Donald Trump’s supporters.

Rep. Donald Payne Jr. (D-10) said in a press statement that the committee is seeking to understand Bannon’s role in creating the “Stop the Steal” publicity campaign leading up the Jan. 6 riot by Trump supporters. The panel also wants to ascertain Bannon’s level of participation in promoting and organizing related events, Payne said.

“I voted to find Mr. Bannon in contempt because we need to understand who was responsible for the January 6th insurrection,” Payne said. “Mr. Bannon’s refusal to acknowledge and respect a subpoena from Congress is another example of his disrespect for American democracy and the rule of law.”

Bannon, who was a private citizen at the time of the Jan. 6, 2021, attack has cited executive privilege in declining to appear before the select committee.

Payne said in his statement that the attack killed five people, injured at least 140 law enforcement officials, and prompted members of Congress and their staffs to flee the Capitol building. The Trump backers were seeking to stop Congress from certifying President Biden’s November 2020 election victory over Trump.

Pascrell called the Jan. 6 Capitol attack “the gravest attack ever on U.S. democracy,” and said that Bannon—guided by former President Trump—spread “poisonous lies.”

In his House floor speech, Pascrell described the vote as “a vote of conscience.”

“Do you agree with the rioting terrorists, or our democracy?” he asked.

“We must hold all involved accountable. This includes those who attacked the police and those organizers who spread the lies and the president who organized it. This is America, not Russia.”

No Privilege for Trump Archival Materials

“President Biden did the right thing today,” said Rep. Pascrell said in an Oct. 8 press statement. “Standing up for our democracy is bigger than turf fights between the legislature and the executive. The January 6 commission remains our last best chance to get answers for what happened that dark day when democracy almost died.

Only nine Republican House members voted in favor of the resolution to hold Bannon in contempt of Congress. All the House Democrats voted yes.

Now the decision on how to move forward rests with Attorney General Merrick Garland and the U.S. Department of Justice, which will decide whether to prosecute Bannon. The former Trump adviser has said he will not testify before the select committee investigating Jan. 6 until courts rule on an executive privilege case filed by Trump.

Prior to the Oct. 21 House vote, Garland told a House Judiciary Committee hearing, “If the House of Representatives votes for a referral of a contempt charge – then the Department of Justice will do what it always does in such circumstances, we will apply the facts and the law and make a decision consistent with the principles of prosecution.”

Contempt of Congress is a misdemeanor crime that carries a punishment of up to a year in prison and a maximum fine of $100,000.

House Minority Leader Kevin McCarthy (R-CA) called the select committee’s subpoena “invalid” in response to a reporter’s query at his Oct. 21 press briefing prior to the House vote on Bannon. McCarthy asserted that the legal process should be given time to play out to determine whether Bannon has executive privilege.

“They’re issuing an invalid subpoena,” he said of the panel. “Issuing invalid subpoenas weakens our power, not if somebody votes against it. He has the right to go to the court to see if he has executive privilege or not. I don’t know if he does or not, but neither does the committee.”

The committee has nine members from the House—seven Democrats and two Republicans. House Speaker Nancy Pelosi (D-CA) appointed all nine members. McCarthy initially had chosen five of the panel’s members, but ultimately pulled all five of his picks after Pelosi rejected two of his choices: Reps. Jim Banks (R-IN) and Jim Jordan (R-OH).