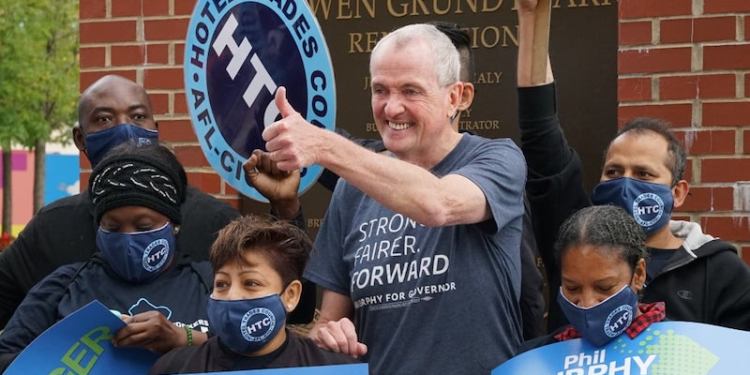 Incumbent Democratic Gov. Phil Murphy holds a lead over Republican challenger Jack Ciattarelli in a 50% to 41% split, according to a Stockton University Poll.

The figures reaffirm a September Stockton poll when Murphy also held a nine percent lead over Ciattarelli, with 3% of New Jersey voters still undecided and the second poll this week showing Murphy with a comfortable lead.

“When you consider that this poll was taken after the gubernatorial debates were done, it appears that voters’ feelings are fairly baked in at this point,” said John Froonjian, Hughes Center executive director. “The polling spread between the candidates is very consistent.”

Murphy was viewed favorably by 49% of those polled, while only 44% had an unfavorable impression. Additionally, 52% approved of Murphy’s job performance, while 44% disapproved.

In contrast, Ciattarelli suffered from being relatively unknown, although things had changed over the last month. Only 19% of voters were unfamiliar with the Republican candidate, which was down significantly from the 45% reported in September. Those who did know of him were split almost evenly, with 38% having a positive view and 37% viewing him negatively.

Levels of partisan polarization were evident among Democrats and Republicans across every measure in the poll, with

However, with an advantage of more than 1 million registered voters, Democrats’ are thought to hold more sway in the coming election, which portends well for Murphy.

In addition, Murphy held stronger among Independents, with improvement noted with that bloc of voters in comparison to an earlier Stockton Poll. Murphy enjoyed the support of those with a four-year degree or more, women, Hispanic voters, and Black voters.

A Stockton survey released Sept. 29 showed Murphy with the same nine point percentage lead over Ciattarelli, 50%-41% including voters who lean toward one candidate or the other. Nine percent were undecided or not liking either candidate in the statewide poll of likely voters taken before the two squared off on the debate stage Sept. 29.

The Stockton poll cames a day after a Monmouth University poll having Murphy up 50%-39%. The previous poll the Jersey Shore polling outfit released had Murphy with a double-digit lead over Ciattarelli on Sept. 22, with just over half (51%) of registered voters polled backing Murphy while 38% planned to vote for Ciattarelli at that time. In August, the polling outfit found Murphy with a 52% to 36% lead.

The Monmouth poll goes against the trend in the last month of a tightening race as an Emerson College/PIX11 poll released Oct . 21 showed Murphy with a six-point lead over Ciattarelli, 50% to 44%.