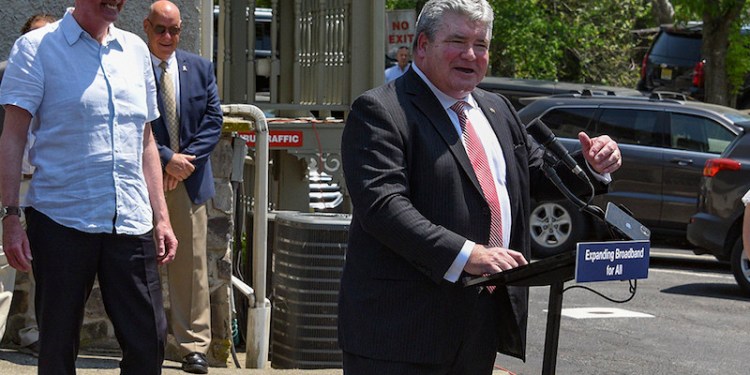 Oroho called to task the Democratic governor on Oct. 29—the same day that state officials, including the state treasurer and the acting director of the Office of Management and Budget, met to discuss debt repayment options.

Murphy in September 2020 signed into law a budget that included $4.5 billion in borrowing, which Oroho said at the time would burden Garden State taxpayers “for decades into the future.” Murphy argued the $4.5 billion in new debt would help close a revenue shortfall sparked by the coronavirus pandemic.

Oroho was not persuaded by the argument, countering that the “massive” debt increase “avoided constitutional scrutiny by state voters and will be used not for basic services but rather to create a fake ‘surplus’ for the administration to spend at will.”

An April 2021 budget analysts told state lawmakers at budget hearings that the $4.5 billion in borrowing ultimately proved unnecessary, prompting criticism of Murphy and his administration.

In June, Murphy and Democrats who control the Legislature set aside a “Debt Defeasance and Prevention Fund” $2.5 billion to defease, or retire, existing bond debt. They set aside an additional $1.2 billion for future capital projects.

Four months later, Oroho is frustrated that the $2.5 billion has not been utilized.

“Instead of taking quick action to wipe debt off the books as instructed by the Legislature in June, the Murphy administration has delayed action for months at a cost of millions of dollars. We’re extremely concerned that the governor only has plans to retire a fraction of the unnecessary debt he issued,” Oroho said.

“Every dollar Gov. Murphy continues to waste on interest payments on debt he has failed to retire is a dollar that’s not available to help New Jerseyans struggling to recover from the pandemic,” he added.

Oroho’s statement came five weeks after he and Assemblyman Hal Wirths (R-24) sent a Sept. 23 letter to Murphy and State Treasurer Elizabeth Muoio, requesting an update on the $2.5 billion. The letter noted that it had been three months since state lawmakers set aside the funds for the purpose of debt retirement.

“However, for the past 90 days, these funds have sat unused by you. In the meantime, expensive bonded State debt that could have been retired continues to rack up interest costs,” Oroho and Wirths wrote.

“Pension debt that could have been retired is causing the State to miss out on investment opportunities. And your administration continues to add $10 million of debt every day to the Unemployment Compensation Fund already mired in more than $300 million of debt,” the Sussex County lawmakers wrote.

In an April 2021 report, the Office of Public Finance of the State of New Jersey said that the state’s bonded obligations totaled more than $44 billion—a debt total almost as large as the $46.4 billion overall state budget Murphy signed into law in June 2021.

The State Department of Treasury said in an Oct. 29 press release that state officials authorized a list of potential General Obligation (GO) bonds to be defeased, or retired.

“The list identifies those series of GO bonds that have a callable date in the near future and, if defeased, will provide the State the greatest savings within the 10-year period outlined in legislation,” Treasury said in the release.

Treasury added that the Oct. 29 meeting was the first formal action in a process that was expected to take until the end of the calendar year to complete. Additionally, Treasury said that the exact selection of which GO bonds from the approved list will be defeased will be made based on market factors at the time of the purchases of the U.S. Treasury securities.

In addition to the General Obligation bonds, the New Jersey Economic Development Authority and the New Jersey Building Authority will meet in the coming weeks to authorize additional bond series to be defeased through the Debt Defeasance and Prevention Fund, Treasury said.