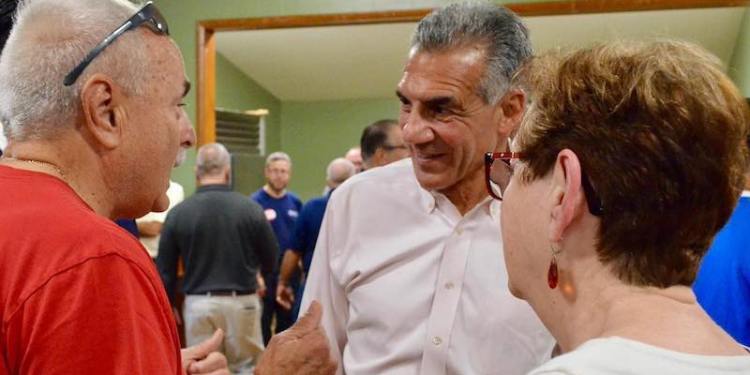 The GOP gubernatorial nominee and the most powerful Democrat in the New Jersey state legislature are currently joined at the hip: Both have yet to concede their races as they await for all votes to be counted.

While the AP and their opponents have declared victory, Jack Ciattarelli and State Senate President Steve Sweeney told their supporters the race is not over yet.

In a video released on Nov. 4, Ciattarelli urged supporters to remain patient and not fall for online conspiracy theories, stating “I don’t want people falling victim to wild conspiracy theories or online rumors. While consideration is paid to any and all credible reports, please don’t believe everything you see or read online.”

The GOP challenger currently trails incumbent Democratic Gov. Phil Murphy by more than 56,000 votes, or 2.3%. Ciattarelli asserted the call by the Associated Press and other media outlets was hasty and that his team wants the 21 counties to continue with the process of counting every legal vote-by-mail and provisional ballot, a process that could “take another week or two.”

“We’ve got compliance people watching over that,” said the former Assemblyman. “If necessary, any decision on a recount or audit will come at the very end of the counting process, not before.”

To that end, the Ciattarelli campaign sent out a fundraising appeal on Nov. 4 they said was needed to help continue the fight. In a mass emailing with the subject line “Our next steps,” the campaign wrote that “This race is far from over….Our team is making sure every legal vote is counted and the will of the people is heard loud and clear. To make our path to victory as smooth as possible, we rely on assistance from grassroots supporters, like yourself, to help us get there.”

“Know this: My team is comprised of some of the best legal and political experts in the country,” Ciattarelli said in his video. “I promise you, whatever the outcome, the election result will be legal and fair. You have my word. Hopefully we’ll be fixing New Jersey together.”

The GOP challenger criticized Murphy’s victory speech by noting “there are still tens of thousands of vote-by-mail and provisional ballots yet to be counted. The governor’s victory speech…was premature. No one should be declaring victory or conceding the election until every legal vote is counted.”

The call to assure that all ballots have been counted is being echoed by South Jersey’s Sweeney (D-3). Relative newcomer Edward Durr currently the longest-serving legislative leader in New Jersey history, by 2,298 votes (32,742 votes to 30,444).  If he wins, he’ll be the first Republican to represent the 3rd district in 20 years.

After the AP called the race on Nov. 4 for Durr, Sweeney stated he was not ready to concede. “The results from Tuesday’s election continue to come in, for instance there were 12,000 ballots recently found in one county,” he wrote in an email to PoliticoNJ. “While I am currently trailing in the race, we want to make sure every vote is counted. Our voters deserve that, and we will wait for the final results.”

The spotlight on Durr has resulted him having to apologize for xenophobic and anti-Muslim social media messages posted from his accounts. He has since deleted those accounts.

“I’m a passionate guy and I sometimes say things in the heat of the moment,” Durr said in a statement released Nov. 5. “If I said things in the past that hurt anybody’s feelings, I sincerely apologize.”

A post from his Twitter account in September 2019 labeled Islam “a false religion,” “a cult of hate,” and its prophet, Muhammad, a “pedophile;” a pair of tweets from called  Sen. Bob Menendez a “pedophile” in 2017 and 2018; and multiple posts from his Facebook account downplayed the Jan. 6 attack on the U.S. Capitol, including that it was “not an insurrection … (but) an unauthorized entry by undocumented federal employers!”