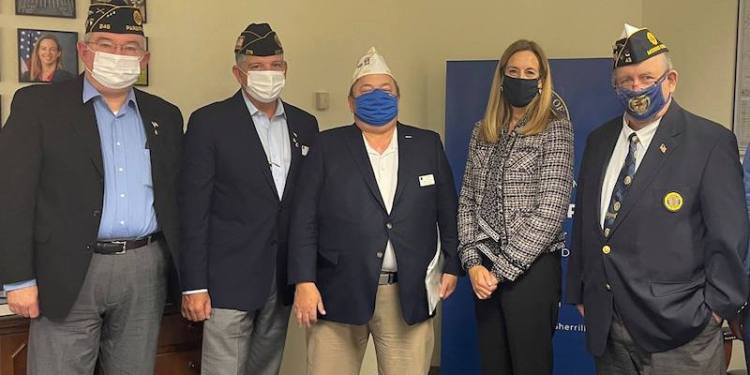 Rep. Mikie Sherrill is stepping up to the plate for her fellow U.S. military veterans.

Sherrill, a former Navy helicopter pilot and graduate of the U.S. Naval Academy, introduced a pair of bills that would provide assistance to military vets as well as advocating in favor of the Vet CENTERS for Mental Health Act.

The first bill would help veterans to acquire rental housing, while the second would start an independent investigation of the Individual Longitudinal Exposure Record (ILER) program.

Sherrill hoped to help veterans in acquiring rental housing in a bill co-sponsored by Rep. Stephanie Bice (R-OK). The Veteran’s Electronic Transcript of Residency for Entering New Tenancies Act, or the VET RENT Act, would direct the Department of Defense (DOD) to provide tenant history for servicemembers housed in DOD housing.

The bipartisan legislation would give servicemembers and veterans a rental history which is often necessary when applying for and renting housing in civilian life.

“For decades, housing has been one of the largest challenges for veterans transitioning from military service to civilian life, particularly in competitive rental markets. Any action we can take to help ease that process and remove barriers for servicemembers and vets looking for housing helps,” said Rep. Sherrill.

The Morris County lawmaker highlighted the issues the ILER program has faced since its inception over 20 plus years. The program took 15 years to establish, and eight years after its establishment in 2013, it remains in the roll-out phase.

“We have a concerning track record when it comes to taking care of our veterans who laid their lives and bodies on the line and were exposed to toxins as a result,” said Sherrill. “Whether it’s nuclear exposure, exposure to Agent Orange, Gulf War Illness, or exposure to toxic burn pits—for decades, too many of our veterans have had to scrap and fight to receive the care they need.”

“This legislation will ensure that Congress is aggressive about overseeing the ILER program, so that we can keep the promises we’ve made to our veterans and their families

Besides the two bipartisan pieces of legislation, Sherrill spoke last month in favor of her bipartisan Vet CENTERS for Mental Health Act in front of the House Committee on Veterans’ Affairs hearing.

The legislation, endorsed by the Veterans of Foreign Wars, the American Legion, and the Iraq and Afghanistan Veterans of America, would provide a range of services to improve life-saving support to veterans.

“My bill provides an answer: a modest but strategic increase in the number of Vet Center locations in states that face challenges like these. Our solution amounts to a less-than-4% increase of the total of 300 Vet Centers nationwide that will make a world of difference to these veterans,” she said.

Sherrill noted the Garden State faces the challenge of being the 11th largest in population despite being the 4th smallest geographically.

“Our veterans may not need to get on a plane to make it to their appointments but they do need to fight traffic, inconsistent public transportation access, expensive toll roads, and other obstacles that make it impractical or impossible to consistently make it to badly-needed appointments,” said the Congresswoman. “Because of these obstacles…many veterans are forced to choose to forgo, or simply are unable to access, Vet Center services that could save their lives.”