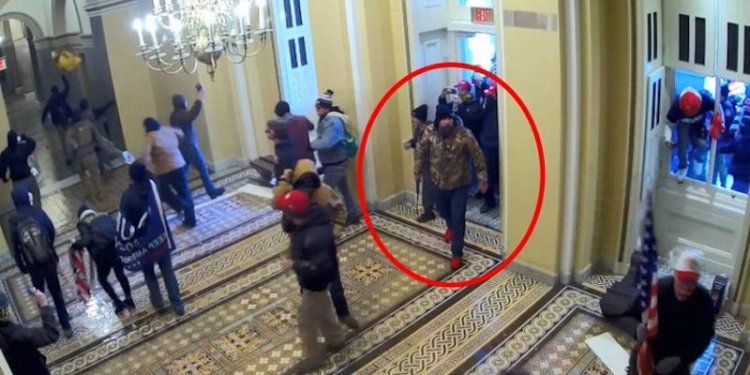 A federal judge handed down the harshest sentence stemming from the Jan. 6 failed insurrection attempt of Donald Trump supporters to a North Jersey resident who punched a police officer on that day.

Hardyston resident Scott Fairlamb was given a sentence of 41 months on Nov. 10 after pleading guilty in August to assaulting a police officer and obstructing a governmental function. Fairlamb’s sentence marked the first among over 210 people charged with assaulting, impeding or resisting police officers during the Capitol riot.

During the sentencing hearing, federal prosecutors showed evidence of Fairlamb’s “swift, violent” assault on a D.C. Metropolitan police officer through videos and screenshots from that day.

Leslie Goemaat, a federal attorney, pointed to video that captured Fairlamb trailing Metropolitan officers as they walked in line through the angry mob, yelling in officers’ faces including “Are you an American? Act like [expletive] ones! You guys have no idea what the [expletive] you’re doing.” Fairlamb then is shown pushing an officer and punching his helmet.

Prosecutors submitted a photo Fairlamb took in front of an “Area Closed” sign near the Capitol, smiling with his middle finger up, as well as videos of him inciting the crowd as he climbed scaffolding.

The federal attorney presented evidence of Fairlamb’s behavior that continued in the days after the riot as well. Three days later, prosecutors said, he took video of himself threatening, “They pulled the pin on the grenade; the blackout is coming. What a time to be a patriot.”

“But what will happen with all these unhinged liberals if this happens?” someone asked him on Instagram on Jan. 9. “War Vs patriots…They don’t want that lol,” Fairlamb responded.

Additionally, Fairlamb stated online that he wasn’t worried and that he would “go again” to the U.S. Capitol.

Fairlamb’s social media accounts indicated that he subscribed to the QAnon conspiracy theory and promoted a bogus claim that former President Donald Trump would become the first president of “the new Republic” on March 4.

In addressing the court, Fairlamb expressed contrition for his “irresponsible, reckless behavior…This is not who I am, not who I was raised to be. I truly regret my actions that day. I have nothing but remorse.”

Fairlamb, the owner of the now shuttered gym in Pompton Lakes and the brother of a Secret Service agent who was assigned to protect former first lady Michelle Obama, told federal authorities in a recent interview that “he had been duped by the social media that he had consumed prior to the riot and was deeply regretful for his conduct on January 6…He stated that he felt great shame over his conduct.”

Defense attorney Harley Breite asked U.S. District Court of Washington, D.C. Judge Royce Lamberth to sentence his client to time served or home detention. Fairlamb has been in a Washington prison since his Jan. 22 arrest at his Hardyston home.

Breite described Fairlamb’s conduct as “aberrational,” saying he “lived his life by certain principles” and violated those principles “in one moment, and his whole life is forever changed…The sum of any man’s life cannot be his worst moment.”

Arguing for Fairlamb to be sentenced to time-served and released on six months of home confinement, his attorney noted “Had this not occurred on federal property, my client would be facing a trespassing and simple assault (case) in any municipal court in this country. Most importantly, my client has expressed sincere remorse for his actions of that day. And those actions are not indicative of who he really is.”

Judge Lamberth described it as “a sad case,” noting how at one point Fairlamb stopped to ask officers if they needed help during the attack on the Capitol. The judge praised Fairlamb for taking a quick plea deal, saying had he gone to trial, “I don’t think there’s any jury that could have acquitted you.”

Despite feeling that Fairlamb’s remorse was sincere, Lamberth found the officer’s victim impact statement to be “powerful” and Fairlamb’s actions “too serious” to go below sentencing guidelines.

In the letter read to the court, the unnamed officer said in his 12 years on the police force “he had never felt the dread and the fear he felt when he responded to the call that the Capitol had been breached.”

Fairlamb was facing 20 years on each count, but the court’s probationary department calculated a sentencing guideline between 41 and 51 months in prison. The judge had no issue with recommending Fairlamb’s move to a prison in New Jersey, but it would be at the discretion of the U.S. attorney general.

In the 10 months since the failed insurrection attempt by Trump supporters, about 675 defendants have been arrested in nearly all states. About 140 police officers were assaulted on that day, with at least nine people who were at the Capitol on Jan. 6 died during or after the rioting—including Capitol Police Officer and South River native Brian Sicknick, who collapsed after he was sprayed by rioters with a chemical irritant. Four other police officers have died by suicide since then. Estimates from May 2021 show the attack caused about $1.5 million worth of damage to the Capitol building.

Prosecutors asked Lamberth to fine Fairlamb for capitalizing on his crimes, although the judge did not do so. Fairlamb has raised over $31,000 through a Christian crowdfunding site with hundreds of dollars coming in during the hours after his sentencing. The money, according to the fundraiser set up by his wife, will be used to pay their mortgage, medical insurance, lawyer fees and monthly bills. Fairlamb was ordered to pay $2,000 toward the restoration efforts.

“Moving forward, I’m ready to pick up the pieces and write a new chapter in my life and put this in the rearview mirror,” Fairlamb told the judge. “Go home with my family and get back to doing what I do best.”