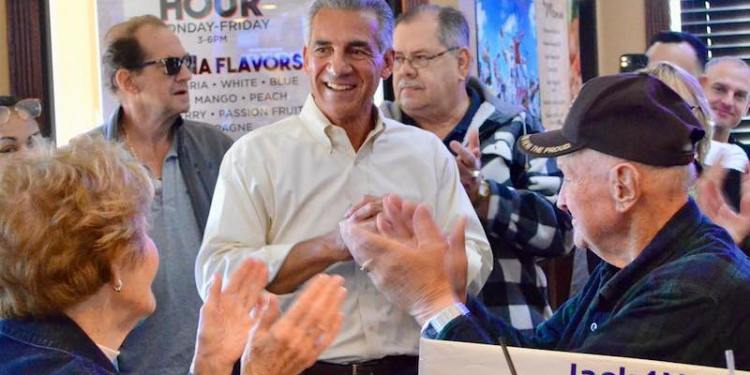 And on the 10th day after the election, GOP gubernatorial challenger Jack Ciattarelli officially conceded to Gov. Phil Murphy.

Ciattarelli, who went into election day down in most polls by at least eight points, was at the head of the red wave in New Jersey this year that saw the Republican Party channel the anger of residents about schools and the pandemic to gain seats in the State Senate, Assembly and across local municipal and school boards.

But as Ciattarelli told a gathering of supporters on Nov. 12, his efforts came up short.

“I hate to lose. I’m also someone who believes strongly in our republic and our democratic processes. Enough votes have been counted. There does not appear to be a path to victory or the basis for a recount,” said Ciattarelli. “Nor do we know of any systemic or widespread fraud. So, no, I see no proof that this election was stolen.”

Ciattarelli held off on conceding after leading election night and the next day. But Murphy’s would overtake the challenger, with his lead growing due to the number of mail-in votes and election day issues associated with the modernization of the state’s election process that resulted in a large number of provisional votes needing to be counted.

Ciattarelli trails Murphy by 2.9%—or roughly 74,000 votes—according to the AP. The GOP challenger said he called the governor this morning and wished him well. He said he enjoyed the campaign for the last two years, calling the residents he met  “the most frustrated” in the nation.

“The fact is, we almost did win,” said the former Assemblyman, who was flanked by his wife Melina and running mate, former State Sen. Diane Allen. “I do not see the result of this election as a failure….Why? Because every single time misguided politicians take this state too far off track, the great people of this state push, pull, and prod it right back to where it belongs, right back to where it needs to be: the common-sense center. ”

Ciattarelli said despite the loss, he was proud of the gains Republicans made during this election and the shifting of the conversation to the ones he highlighted during his campaign.

“Suddenly, I’m hearing Trenton politicians talking about lowering taxes, the kitchen table, common-sense solutions, and paying much closer attention to what it is that’s really bothering everyday New Jerseyans,” he said. “Our work is not done, so let’s fix New Jersey together.”

Murphy becomes the first Democrat in 44 years to be elected to a second term, last accomplished by Brendan Byrne in 1977.  In a press statement after Ciattarelli concession, he thank the Assemblyman and his family for a “spirited campaign and their commitment to public service….We also renew our promise to all New Jerseyans—those that voted for me, and those that did not—to continue fighting for a New Jersey that works for everyone. I look forward to moving confidently toward that goal as one state and one family.”

In general, Ciattarelli’s strong showing was due to the Republican candidate outperforming in such GOP hotbeds as Ocean and Monmouth counties while Democrats did not retain the gains in recent elections such as Bergen and Morris.

Ciattarelli ran a race that centered on the Garden State being broken, and he was the man to fix it. That plan included a number of tax cuts, a new school funding formula favoring the suburbs and argued for personal choice when it came to COVID-19 masks and vaccine mandates.

The Republican hopes that running for a third time will be a charm as he said he would run for governor in 2025, expressing no interest in running in a Federal race. Murphy will be term-limited out and the governorship is an open race.

“That is exactly my plan,” Ciattarelli said. “I’ll be running for governor in four years. I want (Gov. Murphy) to be successful in addressing the problems that are facing New Jersey, but I’m fearful… we’ll be talking about these very same issues, and they’ll need fixing come four years from now.”

“I have no interest in going to Washington. New Jersey is my home. I want to fix New Jersey. “