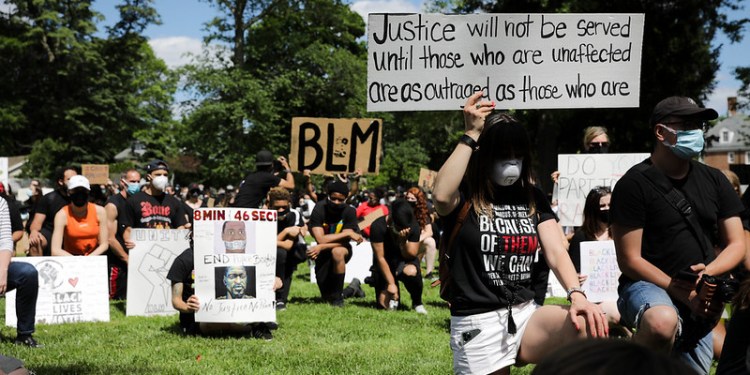 As pundits continue to ask why the election for New Jersey governor was closer than forecasted and resulted in Democrats losing State Senate and Assembly seats, an examination of a poll taken before the election by Fairleigh Dickinson University (FDU) has zeroed in on one element that may have produced the Red Wave of 2021.

The pollsters at FDU found beliefs about systemic racism are strongly linked to opposition to police reforms, and argue these views played a key role in the unexpectedly close race between Gov. Phil Murphy and his challenger Jack Ciattarelli.

Many people, including a plurality of Whites, responded in the survey they don’t believe that there is significant systemic racism in the U.S. today and oppose attempts to correct it with police reforms.

Dan Cassino, the executive director of the poll, noted that while some of the police reforms are popular—including 73% of New Jersey voters supporting requiring officers to report other officers they see violating use of force rules—others are not. Most notably, 42% of those surveyed did not support rules that prevent officers from arresting minors for possession of alcohol or marijuana.

The survey asked a series of questions about controversies in American policing, including should officers have military-style weapons and equipment, whether it’s ok to have cops break the rules sometimes, and whether regulating the police makes the public less safe.

Opinions about racism were measured with three questions. Respondents were asked if the U.S. has gone too far, or not far enough, in giving Blacks equal rights; if the legacy of slavery affects Blacks today; and whether the bigger problem is seeing discrimination where it does not exist, or not seeing it where it does.

“It’s become an article of faith among many, mostly White, voters that there is no such thing as systemic racism,” said Cassino. “And that view is going to structure how they view a whole host of other issues.”

Overall, younger people and women are more likely to say that there is significant systemic racism in the U.S. Thirty-four percent of women fall into the “high” category; compared to just 18% of men. Conversely, 32% of voters 65 and over fall into the “low” category, denying that there is systemic racism against Blacks, compared to just 17% of voters under 30 in the low category.

By race, Whites are much less likely to believe that systemic racism against Blacks exists: 40% are in the “low” category, compared to just 10% of Blacks and 17% of Hispanics. The survey was conducted between Oct. 23 and 28, using a certified list of registered voters in New Jersey.

The authors of the poll found that the view of systemic racism plays a bigger role in views of police reform than the party does. For instance, 49% of those who say that systemic racism exists “strongly agree” that the police should not have military-style weapons and equipment. Among those who don’t believe that there is systemic racism, that figure is only 11%. That 38 point gap is much larger than the gap (26 points) between Republicans and Democrats on the issue.

Two-thirds of voters in New Jersey agree that police wouldn’t have to use force if suspects just did what they were told. A deeper dive into the numbers show 94% of those who think systemic racism is real say that suspects should just do what they’re told to avoid the use of force.

Among Republicans, Democrats and Independents, voters who say that systemic racism doesn’t exist are much more likely to oppose police reforms. The effects of beliefs about systemic racism seem to trump the effects of party: at low and moderate levels of the scale, there is a range of opinions between parties.

But among those voters who don’t believe that there is systemic racism, there is no difference in opposition to police reform between partisan groups.

While these views about systemic racism are tied to people’s political views— Democrats are much more likely to be in the “high” category, and Republicans more likely to be in the “low” category—significant differences were found among Murphy voters. For instance, Murphy won 95% of Democrats who say that there is significant systemic racism, but only 74% of Democrats who don’t think it exists.

“If Democrats want to push police reforms, reparations, or any other policy tied in with race, they first have to convince people that systemic racism actually exists,” said Cassino. “There’s a case to be made, but they have a lot of work to do.”