New Jersey to get $2.66 billion to help transit pandemic recovery 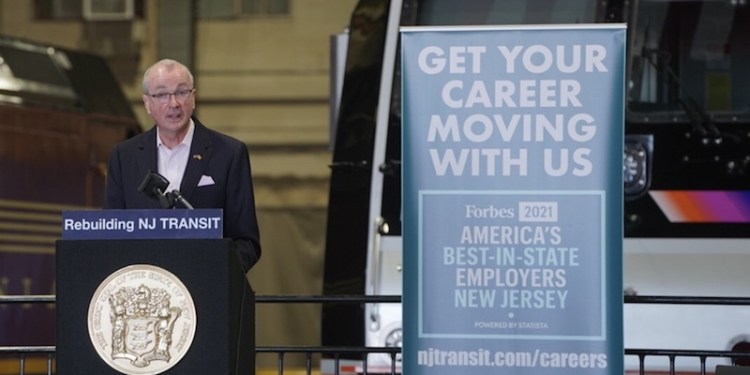 Governors of New Jersey, New York and Connecticut announced Nov. 9 an accord on how to split $14.2 billion of federal aid aimed at bolstering mass transit, which suffered a huge loss in ridership due to the COVID-19 pandemic.

The agreement came after months of back and forth over how to fairly apportion the funds which Congress provided in the Coronavirus Response and Relief Supplemental Appropriations Act of 2021 and the American Rescue Plan Act. New York will get $10.85 billion, New Jersey will get $2.66 billion, and Connecticut will get $474 million under the deal.

“Nothing is more critical to our region’s economic recovery than our mass transportation system. With this agreement, we ensure a reliable and safe commute as workers return to their offices,” Gov. Phil Murphy said in a joint press release announcing the agreement.

The tri-state area was among the hardest hit by the pandemic and the governors said the federal funds will help the nation’s largest subway, commuter rail and bus services to avoid layoffs, furloughs, and severe service reductions as they attempt to recover.

Gov. Kathy Hochul (D-NY) echoed Murphy’s praise for the deal, saying that New York City and the region “can’t fully recover from the pandemic without our transit agencies effectively and efficiently moving millions of people in and out of New York City each day. As a result of a series of productive conversations with my fellow governors, I’m glad that we have reached an agreement that is beneficial to all.”

Gov. Ned Lamont (D-CT) called the agreement “great news” for the region and said it would ensure “critical federal funding” to support the recovery of public transportation systems.

GOP Senators: NY Got Too Much Money

News of the agreement prompted questions from New Jersey state Republican leaders. Sen. Steve Oroho (R-24), who is slated to become Senate Republican leader in January, and Sen. Declan O’Scanlon (R-13), tapped to replace Oroho as Senate Budget Officer, noted in a Nov. 9 press statement that the three states had disagreed for many months over how to split the funds.

New Jersey and Connecticut wanted the money split using guidance from the Federal Transit Administration, as has typically been done when divvying up regional transportation grants, but New York refused to abide by this standard FTA formula, the GOP lawmakers said. Some 47 other states used the FTA formula to determine how they would split their federal COVID-19 transit funding, Oroho and O’Scanlon said in a Nov. 9 press release.

Oroho and O’Scanlon pointed to July 2021 reports of the wrangling between New York and New Jersey and said that New York at the time was reportedly seeking an additional $673 million beyond what it would have received under the standard formula. They said that under the final deal, New Jersey gave up even more money—$1 billion—to New York beyond what New York would have received under the standard formula.

Making up for Cuts

“Looks like New Jersey negotiators did a great job…FOR NEW YORK!” said O’Scanlon. “It’s mind-boggling that the negotiations went from New York asking for an extra $637 million to the Murphy administration giving them $1 billion.”

Murphy administration officials respond to the criticism by noting New Jersey will still get close to $3.6 billion figure, but from other federal sources and a shared funding agreement with New York.