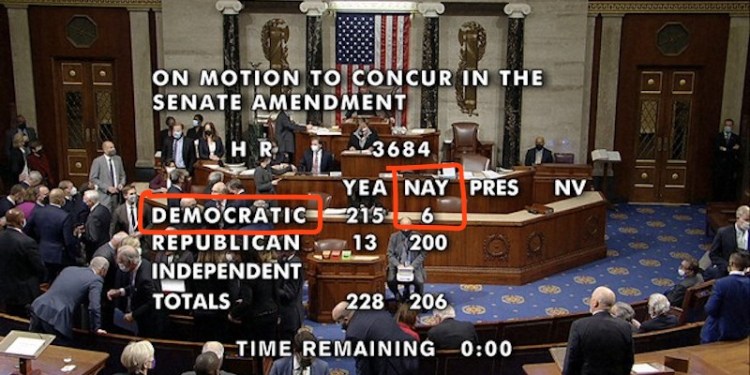 Since September, moderates and progressives in the Democratic party have been working towards finalizing a deal on the two tent poles of the Biden domestic agenda: the Bipartisan Infrastructure Bill and the Build Back Better Act.

We are not going to retrace the history of all the arguments. Progressives shot for a $3.5 trillion, moderates wanted much less. Negotiations from two members of the Democratic caucus representing each camp—Rep. Josh Gottheimer representing the Centrists and Rep. Pramila Jayapal (D-WA) for the Congressional Progressive Caucus—resulted in a deal.

They understood after the Nov. 2 election that the current stalemate was no longer tenable. And on a late Friday night, the House passed the $1.2 trillion infrastructure bill by a 228-to-206—with 13 Republicans in support and six Democrats voting against.

More importantly, the deal sets a firm date for a vote on the House’s version of the Build Back Better Act—although we have seen those promises like this broken earlier this year.

All of this made us wonder—where is the outrage for the six Squad members who voted against the bill? After all, a national poll last week revealed that if Dems cannot enact the Build Back Better plan, more would blame progressives (40%) than moderates (33%).

We understand each district is different and we trust voters to elect candidates—Democrat or Republican—that best reflect their values. And we know with a slim margin Dems have in Congress makes for having to accommodate every member.

But at what cost? We come to argue that Democrat leadership should no longer support Reps. Alexandria Ocasio-Cortez, Jamaal Bowman, Cori Bush, Ilhan Omar, Ayanna Pressley and Rashida Tlaib—as well as organizations like the Sunrise Movement—and more forcefully, look to find a strong primary opponent to defeat them. In the same week that both Senators from Virginia stated their party sustained significant losses due to the inability to campaign on federal legislation being passed, especially infrastructure, the six voted against the bill and turned their back on President Joe Biden and leaders of their party who told them their vote was needed.

Its is not just us here in North Jersey wondering why the House members voted against a bill that had overwhelming support from their party. The New York Times noted in a story last week about Ocasio-Cortez’s district and her vote against the infrastructure bill, “Even in her New York City district — perceived as one of the most liberal in the nation — there are sharp disagreements unfolding over how far left the party should go and how change is best achieved.”

Let us say this loudly—progressives play an important and large role in driving the agenda of the Democratic party. But the actions of the Squad and their push for far-left policies not in-step with an a majority of Americans created the type of red wave in New Jersey that led to the historic defeat of State Senate President Steve Sweeney (D-3).

The Democratic party should invest resources into primary opponents that are more aligned with President Biden’s agenda. After all, Pressley in the 2020 campaign endorsed and actively participated in online fundraising for the liberal bid and of former Glen Rock Councilwoman Arati Kreibich when she ran in the primary against Gottheimer.

We believe that Ocasio-Cortez, Bowman, Bush, Omar, Pressley and Tlaib have a choice—continue to behave like gadfly’s instead of lawmakers and enjoy the view as the minority party in Washington where none of your priorities will be considered nevertheless passed. Or understand that your power to drive the agenda is used best when you see the bigger picture of progress being better than perfection.

If the six Squad members continue to be more concerned about their leftist ideology rather than enacting Democratic policies that will help the U.S. grow and prosper, party leaders are obligated to pursue all opportunities to find a primary opponent that will.