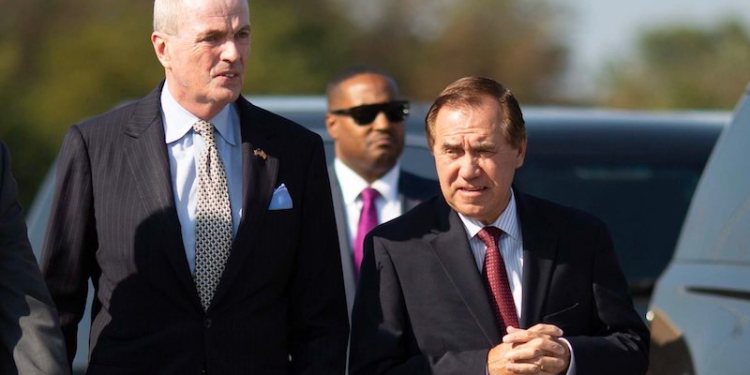 Assembly Speaker Craig Coughlin (D-19) will be the only returning legislative leader when the State Senate and Assembly convene for the 220th legislative session this upcoming January.

Across the aisle in the Assembly, Republican John DiMaio (R-23) was elected to be the new Minority Leader after the ascension of Jon Bramnick to the State Senate.

In the upper chamber, Senate Minority Leader Tom Kean, Jr. decision to not run has led to State Sen. Steve Oroho (R-24) being elected to that position. And necessitated by the surprising defeat ending the historic State Senate president run of Steve Sweeney (D-3), Nicholas Scutari (D-22) will be the new leader for Dems in the Senate.

The fallout of the 2021 elections has resulted in Oroho being arguably the most powerful member of the North Jersey delegation in Trenton. The Sussex County lawmaker said his party will work to get New Jersey back on track according to the way voters expressed earlier this month.

“We want New Jerseyans to know that our caucus heard the message sent by voters on Election Day loud and clear,” said Oroho. “We’ll work tirelessly to ensure that government respects people’s rights, addresses their concerns, and makes living in the Garden State more affordable for everyone.”

Kean, Jr. praised the selection of Oroho, commenting that “the initiative and commitment Steve has displayed during more than a dozen years as a dynamic force in the Legislature will serve him well as the caucus leader. The expertise and guidance that marked his tenure as Republican Budget Officer will be invaluable in forging a more fiscally responsible Trenton bureaucracy.”

DiMaio Wins Out in Assembly

The transition in the Assembly for the GOP was reportedly not as seamless. While his Senate colleagues quickly rallied around Oroho, DiMaio emerged victorious after the candidacy of Assemblywoman Nancy Munoz (R-21) was met with resistance from those in the party due to concerns from pro-life leaders, Second Amendment advocates, and medical freedom activists that derailed her candidacy

DiMaio said his caucus will focus on continuing the progress Republicans made in this year’s election.

“Under this new leadership team, (we) will focus on letting people keep the money they earn, parent their children and live freely. It is what Republicans stand for. And is clearly what people want,” said the Hackettstown lawmaker. “If Democrats didn’t get that message, Republicans stand to personally deliver it every step of the way.”

Nearly a week after DiMaio was named his party’s leader, it was announced on Nov. 10 that Munoz would join the GOP’s leadership team as the sole deputy minority leader with plans to launch a Republican women’s caucus at the start of the next legislative session.

“One hundred years ago, the first women elected to serve in the state Assembly were both Republicans. It is time we have a caucus dedicated to those who have been pursuing common legislative objectives for the last century,” Munoz (R-Union) said. “We will honor the women that paved the way for us to serve in the Legislature, and amplify the concerns of the women who elected us to represent them. I am privileged to be leading the charge.”

For the Dems in the upper chamber, there is still some suspense. While the caucus announced on Nov. 12 that they have chosen Scutari to replace Sweeney, State Sen. Nia Gill (D-34) is expected to challenge Scutari for the post when the full Senate meets in January.

Scutari said he was honored to win the support of his colleagues to be the next Senate President.

“I look forward to working with the diverse and talented group of senators in the Democratic caucus and with other top state leaders to implement policies needed to address the needs of all the people of New Jersey,” Scutari said. “Every voice will be heard as we work to serve the priorities of each community and every resident.”

The Union County lawmaker will have a leadership team well represented by North Jersey Senators. State Sen. M Teresa Ruiz (D-29) will be the new Senate Majority Leader, becoming the first Latina to serve as majority leader and the first senator from Newark since the 1870s. State Sen. Sandra Cunningham (D-31) will replace Ruiz as president pro-tempore.

“I want to thank my colleagues for electing me to serve as the Senate Majority Leader for the upcoming legislative session. I am honored to be the first Latina to hold this position,” stated Ruiz, who will replace the retiring Loretta Weinberg (D-37). “Together with Senator Scutari, Senator Cunningham and the entire Democratic Caucus, we can work to create policy and improve government that works for everyone who calls New Jersey home.”

Cunningham added, “The challenges faced by people throughout New Jersey offer opportunities for the Senate to be responsive to their needs. We will continue to address criminal justice reform and work to make real and lasting progress for every community in the state. We fully understand that our diversity is our strength.”

Coughlin Time for a Third Time

Coughlin is the first Democratic Assembly Speaker to serve three consecutive two-year terms. The Middlesex County lawmaker promised he will continue to pursue the issues that have defined his first two terms as the lead lawmaker in the Assembly.

“In these past four years, we did not shy away from tackling the big issues,” stated the Speaker. “We raised the minimum wage, we made climate response a real priority, reinvigorated our state’s economic competitiveness, and addressed serious institutional inequities.”

Coughlin continued, “The charge ahead is to keep building policy for transformative and lasting change. We’re aiming to get to the heart of some of the deepest inequalities laid bare by the pandemic—from housing security, food access, and small business resilience to childcare, education, and mental health…In partnership with the Senate and Governor, we will build on the progress of these past four years.”

Among those serving on his leadership team will be Assemblyman Benjie Wimberly (D-35), who was elected as Speaker Pro Tempore by his fellow Democrats.

“The members of this caucus have taken on some of the toughest pieces of legislation the State has seen in decades,”said Wimberly. “Over the last two years, we have worked to create a new industry, stabilize housing during an unprecedented public health crisis, bring to the forefront systemic social justice concerns of our communities and address education concerns which arose from the pandemic. I look forward to continuing our work in the Assembly with Speaker Coughlin and all members of the Caucus.”