The federal lawmakers tout investments to be made in North Jersey 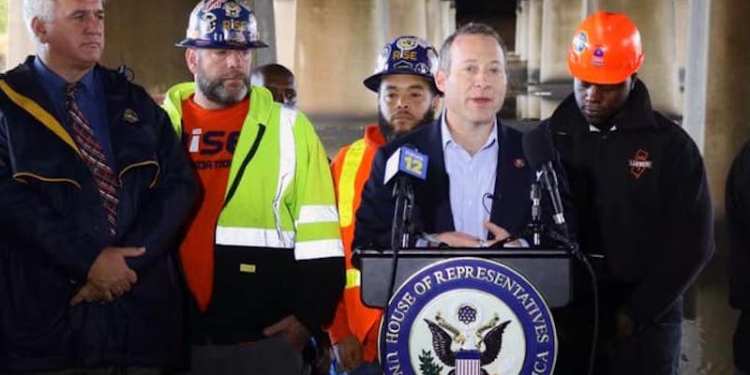 In the days leading up to President Joe Biden signing the $1.0 trillion Bipartisan Infrastructure Bill into law, two North Jersey lawmakers were back home to highlight the benefits from the federal legislation to their congressional district.

Rep. Josh Gottheimer was literally under a Route 4 bridge that connects Teaneck and Hackensack to showcase one of the projects that will be eligible for federal aid. A few hours later, Rep. Mikie Sherrill held a roundtable in Madison to promote mass transit the benefits of the soon to be law.

Both members of Congress held events Nov. 12 in their district to go over the bill that will not only make investment in roads, bridges, and mass transit—including getting the Gateway Tunnel between New York and New Jersey built—but commits resources to storm resiliency due to climate change, electric vehicle infrastructure, clean drinking water, and reliable high-speed broadband internet.

“For everyone who has ever hit a pothole, been stuck on a train, spent too much time commuting, or worried about the water their children are drinking, this Bipartisan Infrastructure Bill is a game changer. It is an investment that New Jersey needs, badly. I heard you loud and clear — you wanted action,” said Gottheimer. “Today, we are delivering.”

“Over the last months, Democrats and Republicans came together, working with the President, crafted, and passed the greatest infrastructure investment in a century. It is a great example of how our government is supposed to work: coming together, across party lines, to get things done for our families and small businesses.”

Gottheimer was joined with local North Jersey labor leaders, business leaders, and officials to offer their perspective on how federal monies could be used in the 5th District.

“We stood [here] last April where we were highlighting the need for infrastructure repair, not only here in Bergen County, but throughout the country. But today, I’m happy to be able to say, our Congressman played a pivotal role in getting the job done that we all needed very, very much,” stated Teaneck Mayor Jim Dunleavy. “It will mean a lot to us and a lot to my colleagues across Bergen County who have a sore need to get this done.”

New Jersey has the third worst roads in the nation, as of 2020, and hundreds of New Jersey bridges are currently rated as deficient. Gottheimer has stressed that the bill is one that will create jobs, a sentiment shared by local union leaders.

“We’re going to be putting people to work at jobs that let people go home and feed their families, send their children to college, and have a great education,” said Bergen County Commissioner and President of IBEW Local 164 Tom Sullivan. “This bill puts hard-working people to work at a middle-class wage and allows them to raise a family.”

Greg Lalevee of IUOE Local 825 added, “The Operating Engineers look to the future with a great deal of optimism and enthusiasm over this infrastructure bill. World class infrastructure improves our regional economy and our national economy and our global competitiveness. We look forward to training the next generation of blue-collar, well-paid workers to go out and execute on these projects.”

In the 11th Congressional District, Rep. Sherrill hosted a roundtable with local officials, commuters from Madison and Chatham, transit and environmental experts, and small business owners. In her interaction with the vested parties, the Congresswoman stressed how instrumental funding for the Gateway Tunnel Project will be in making New Jerseyans’ commutes safer and more reliable.

Sherrill said the choice of holding the meeting at Madison train station “critical to the local community and economy” was the perfect place to explain what the bill’s investments will result in.

“For too long, New Jerseyans have suffered hellish commutes that have been inefficient, unreliable, and unsafe,” she said. “Funding the nation’s most critical infrastructure project, the Gateway Tunnel, will create jobs right here in New Jersey and help lower our carbon emissions—this bipartisan infrastructure package is a major win for NJ-11 families.”

Brian Dempsey, Chatham commuter for over 20 years, told those assembled that when his family moved to Chatham in 2001, he believed he had found the perfect commuting situation where he could walk to the station in town and then to his office only five minutes away from Penn Station.

“But I learned the hard way that you can’t rely on the trains to get you where you need to be on time,” explained Dempsey. “I stopped scheduling morning meetings. I had to stop coaching my kids’ sports teams because more often than not, I missed practice as a result of a delayed train home.”

“Needless to say that I am thrilled that ground was broken within the past few weeks on a new Portal Bridge and that this bill will fund the Gateway Tunnel Project.”

Speakers at both events touted the benefits to the economy—both to the overall economy and small businesses—as well. Patricia Khawand, owner of Fleur de Sel located near the Chatham Train Station, offered that “as a small local business that opened during the pandemic, the train commuter segment is key to our business growth and sustainability.”