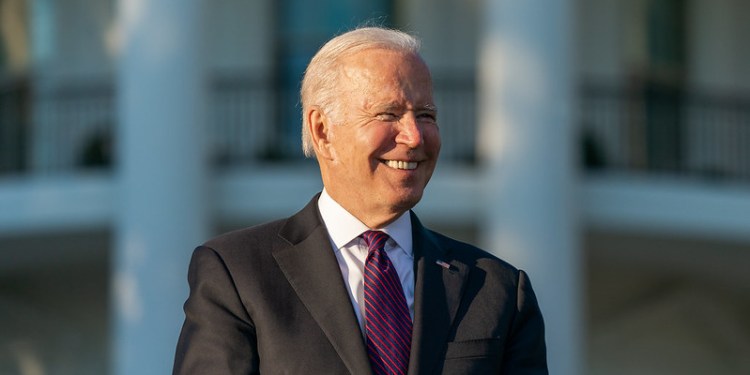 President Joe Biden on the Front Lawn of the White House signed into law the $1.2 trillion infrastructure bill that he and North Jersey lawmakers hailed as a game changer to moving New Jersey and the nation in the 21st century and beyond.

“Throughout our history, we’ve emerged from crises by investing in ourselves. I promised that we couldn’t just build back to what it was before. We literally had to build back better,” said Biden in his remarks at the bill signing ceremony Nov. 15. “You couldn’t build back—we’re the only country that’s always come out of great crises stronger than when we went in.”

“I truly believe that 50 years from now, historians are going to look back at this moment and say, ‘That’s the moment America began to win the competition of the 21st century’.”

The bill has been promoted as an investment in the national aging physical infrastructure that will create jobs as the U.S. emerges from the coronavirus pandemic and helps to fight rising inflation. Besides allocating monies to fix roads, bridges and investments in mass transit, the new law earmarks funding for water infrastructure, flood resiliency needed due to climate change, Superfund sites and cybersecurity.

Rep. Mikie Sherrill said attending the ceremony is was a reminder of why she wanted to be in Congress: to get things done for the people of North Jersey.

“It’s hard to overstate how large of a win this legislation is for families across NJ-11. For years, I’ve listened to the stories of hellish commutes that disrupt daily life and lived those disruptions myself,” said the Congresswoman. “(From) the Gateway Tunnel Project and the Lackawanna Cutoff, ensuring our drinking water is safe from PFAS and lead pipes, creating good-paying union jobs that will fuel our economy, and investing in our children’s future and our global competitive edge—this legislation will benefit families in innumerable ways for decades to come.”

Both Sherrill and Rep. Josh Gottheimer noted the bill showed that despite the polarization seen in politics, there are still opportunities for lawmakers on both side of the aisle to find common ground and deliver for the American people.

“In a major victory for pragmatic problem solving, Democrats and Republicans came together, working with the President, to craft and pass the greatest infrastructure investment in a century,” said Gottheimer. “This bipartisan bill is a huge win for New Jersey families and will help create two million jobs a year for the next decade. Now, we can finally get shovels in the ground and people to work.”

“I am proud that it includes money to replace water pipes to protect Americans, especially American children, from lead exposure in their drinking water,” said Payne. “We have needed this investment for decades and I applaud President Biden for his leadership to make this critical bipartisan investment.”

Rep. Tom Malinowski highlighted the bill’s attempts to address climate change, including an expected $104 million over five years to support the expansion of an electric vehicle charging network in the state and $50 billion nationally for flood control and climate-resilient infrastructure projects to protect communities from natural disasters.

“With this bill, we are making the largest investment ever in…protecting our communities from flooding, and transitioning America from fossil fuels to a clean energy future,” said Malinowski.

The congressman added that the new law will strengthen the U.S. supply chains by investing $17 billion in port infrastructure and waterways and $25 billion in airports to address repair and maintenance backlogs, and reduce congestion and emissions near ports and airports.

“Its investments in America’s roads, railways, and bridges will increase resiliency along our supply chains by rebuilding the broken infrastructure that is slowing us down and holding our economy back,” he said.

Sens. Bob Menendez and Cory Booker outlined how the bill will send billions of dollars to New Jersey in federal funding to expand mass transit and build the Gateway Project.

“NJ Transit is the largest statewide transit system in America and we’re also home to the critical infrastructure that supports the busiest rail corridor in America—the Northeast Corridor,” said Menendez. “For agencies like NJ Transit, this legislation will provide access to billions of dollars over the coming years to complete major upgrades.”

The legislation will provide an estimated $12.3 billion in guaranteed transportation and transit funding formula dollars for New Jersey over the next five years—the largest ever investment in the state’s transportation infrastructure.

“As President Biden signs the Infrastructure Investment and Jobs Act, New Jerseyans can expect to see billions of dollars for our state’s infrastructure and advancing the Gateway Project,” said Booker. “In addition to funding critical infrastructure projects, these investments will also enhance our nation’s competitiveness and position our economy for continued growth by putting more Americans to work.”

NJ Transit President and CEO Kevin Corbett added “This infrastructure plan will provide much needed funding to advance essential projects within our Five-Year Capital Plan that will enhance service reliability and frequency as ridership returns to the system.”

Among the items of the capital plan Corbett is eyeing to use federal funds include extending the Hudson-Bergen Light Rail into Bergen County and the West Side of Jersey City; moving to a zero-emissions bus fleet; modernizing aging train stations and rail bridges, including the Newark Light Rail; and increasing rail capacity on several lines.

President Biden ended the ceremony by proclaiming the bill is more than just building new roads and bridges, but a message to Americans and the world.

“The world has changed, and we have to be ready,” said the President. “My fellow Americans, I want you to know: We hear you, and we see you. So my message to the American people is this: America is moving again, and your life is going to change for the better. For real. It’s a big deal.”

*Funding is national over the next five years

In New Jersey, fund totals include: