Map will be rewritten for the 2022 election 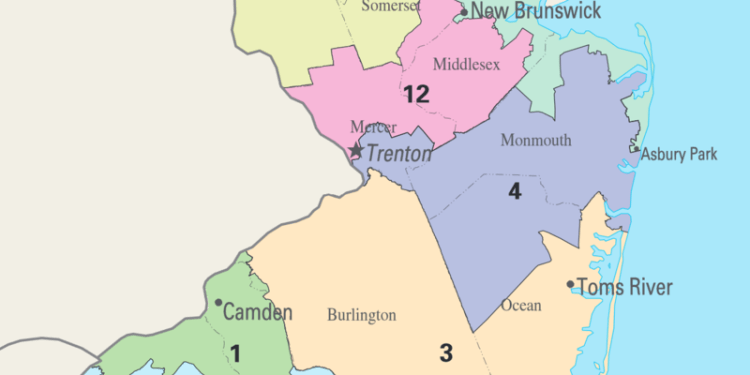 The once-in-a-decade redistricting of New Jersey’s congressional boundaries is underway.

Following each U.S. Census, each state is required to reconfigure its districts in response to population changes measured by the count in order to ensure citizens are represented accurately in Congress.

Typically, elections held the year after the census are held using a newly-created map, but the COVID-19 pandemic caused a delay in states receiving federal data related to the count. As a result, New Jersey voters approved a measure in November 2020 that postponed redistricting for the state legislative districts until after the 2021 election and kept the current boundaries in effect.

But, next year, when New Jersey’s 12 members of the US House of Representatives are back on the ballot, the new Federal maps will be used.

By law, electoral districts must have substantially equal population, in terms of numbers, as well as provide fair representation to race and ethnic minorities, in line with the 1965 Voting Rights Act.

When conducted fairly, redistricting accurately reflects population changes and racial diversity and is used to equitably allocate representation in Washington, DC. The process, however, is vulnerable to fighting between parties over where the boundaries are drawn since it can affect the ability of a party or ethnic group to win elections.

Depending on how maps are drawn, districts may end up with new representation on Capitol Hill. Or, a district that traditionally leaned toward one political party may shift toward the opposite end of the spectrum.

It could also reduce the number of cities and towns split between districts. Currently, there are more than three dozen municipalities divided between more than one congressional districts. For example, Montclair is split between Rep. Donald Payne (D-10) and Rep. Mikie Sherrill (D-11).

How could it impact New Jersey?

At stake is political control of New Jersey’s dozen congressional districts, as well as whether Democrats will maintain their nine-vote edge in the House after the 2022 elections.

Currently, Democrats hold 10 of the 12 congressional seats in the Garden State, but after Republicans swept several local, county and state races in the 2021 election, much attention will be on New Jersey’s swing districts next fall.

In 2016 and 2018, four Democrats flipped GOP-held seats: Rep. Andy Kim in the 3rd District, Rep. Josh Gottheimer in the 5th District, Rep. Tom Malinowski in the 7th District and Rep. Mikie Sherrill in the 11th District.

Their victories were key in Democrats taking back control of Congress, but typically the party whose President is in power loses seats during the midterm. For much of the past decade, New Jersey’s congressional delegation was split evenly between Democrats and Republicans.

The growth can mostly be attributed to increases in Hudson and Essex counties, as well as part of Ocean County. However, there are some areas, like Sussex, Cape May, Salem, Cumberland and Atlantic counties, that lost population.

New Jersey is also becoming more diverse, the census found. Since 2010. Asian-Americans had the highest population growth of any ethnic group in the state, followed by those who identify as Latino/Hispanic.

Who is redrawing the districts?

The Congressional Redistricting Commission, which is made up of six Democrats and six Republicans, is responsible for the process. They are appointed by party leaders

After the panel could not decide on a 13th commissioner to serve as a tie-breaking member, the State Supreme Court named retired former Supreme Court Justice John Wallace to the post.

The New Jersey Globe noted that this was the first time the State Supreme Court was called upon to select the commission’s tiebreaker. The outlet also pointed out that the panel has never agreed on a map without needing the 13th member to break the deadlock.

Members of the public can submit their own proposals for district boundaries to the commission, which is required to consider them.

When will we know the new districts?

By law, the commission must adopt the new map by a majority vote of its members and submit it to the New Jersey Secretary of State by Jan. 18, 2022.

If the commission is unable to certify a plan by then, the New Jersey Supreme Court is required to certify one of the two maps receiving the greatest number of votes. Prior to adoption, the commission plans to hold 10 public hearings — far above the three required by law — to garner input around the state.

How will the districts change?

The three districts having to shed votes are the majority urban district of the 8th, 9th and 10th Congressional Districts. The 8th district made up of towns in Bergen, Hudson and Essex held by Rep. Albio Sires has to allocate approximately 47,000 voters to another district. With Newark continuing to grow, Rep. Donald Payne, Jr.’s 10th district will need to reduce its population by about 41,000. And the Rep. Bill Pascrell-led 9th CD will have to depart with 18,000 residents.

Gaining those voters are three districts that have featured closest races in North Jersey the past couple of cycles. Historically Republican districts, Reps. Tom Malinowski and Mikie Sherrill have turned the 7th and 11th Congressional districts blue the last two elections. Expected to face a rematch with Kean, Malinowski’s district will add 14,000 voters. In the largely Morris County district held by Sherrill, the commission will be charged with adding 12,000 voters.

And in the Northernmost CD, Rep. Josh Gottheimer will receive the biggest influx of 27,000 voters.

Politics of Redrawing the Map

Democrats will undoubtedly offer a map that is more favorable to their candidates, looking to add Dem voters in the 7th and 11th Congressional Districts to strengthen the chances of Reps. Malinowski and Sherrill returning to Congress. The other key district will be Rep. Kim’s 3rd district, which has been targeted along with Malinowski, by national Republicans as key to winning back the House. Pundits had forecast a map that looked to target Rep. Jeff Van Drew (R-2) to a more Democrat friendly district. But after the 2021 elections that saw state Republicans make gains, the focus now looks to be fortifying incumbents that could be in trouble in midterm elections.

Republicans will focus on the same three districts of Malinowski, Kim and Sherrill as well as Gottheimer’s 5th district seat. Historically held by the GOP, the 7th is expected to be the main focus in their map and election year strategy. Malinowski narrowly defeated State Senate Minority Leader Tom Kean, Jr. by approximately 5,000 votes in 2020. With the second term Democrat seen as vulnerable due to the current political landscape and a Congressional investigation into the reporting of stock trades, Kean has the backing of the House’s election committee in the expected rematch.