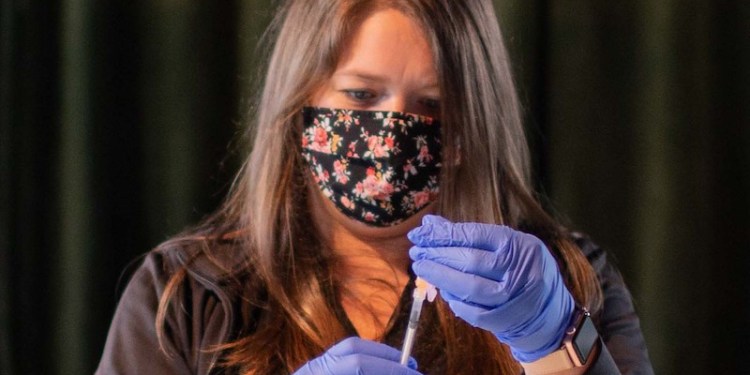 The majority of Americans still support COVID-19-related vaccination and masking mandates in the nation’s schools, although declining as intense protests at board of education meetings appear to have taken a toll.

The poll comes as New Jersey reported that residents receiving the booster shot had passed one million on Nov. 18.

The Monmouth University Poll found that vaccination mandates for healthcare and air travel workers remains above 50%, although there is declining popularity for requiring vaccinations for restaurant patrons. Additionally, the poll  found strong support for President Joe Biden’s handling of the pandemic.

Sixty-one percent of the American public supported requirements that students, teachers, and staff wear masks while in school, which wavered from the 66% recorded in September.

Regarding vaccine mandates for both teachers and staff, support remained steady at 59% compared to the 60% reported in September. Support was also steady for vaccination requirements of students age 12 and older (53%, compared to 51% in September.)

However, support for students in the newly-eligible 5 to 11 age group was more tepid, with just 44% of the general public and 34% of parents saying they would endorse vaccine mandates for this demographic.

“The dramatic images of parents protesting at school board meetings has not shifted overall public opinion on mandates one way or the other since the beginning of the school year,” said Patrick Murray, director of the independent Monmouth University Polling Institute.

Opinion Steady for Other Industries

The survey found opinion on vaccine mandates in other settings hasn’t shifted much since September, including the healthcare sector (61%), airplane industry (57%), and general office settings (51%).

Each of the results was down two percentage points from September, with one exception: restauranting dining.

Overall, only 39% of Americans believed you should need to prove your vaccination to enter a restaurant for a meal. This was down seven points from September.

State officials reported boosters and third shots of 565,391 for Pfizer and 420,123 for Moderna. A total of 17,814 New Jerseyans have received their Johnson & Johnson booster shot. Overall, 1,003,328 have received a booster or third shot.

As for those that have passed, the state reported 10 confirmed deaths, bringing that total to 25,411. The state listed probable deaths at 2,819, bringing the overall total to 28,230. State officials noted seven deaths occurred in the last 24 hours of reporting that have not yet been lab confirmed.

The state reported 765 patients were hospitalized; by region, there were 284 in the North, 232 in the Central and 249 in the South. Of those hospitalized, 166 are in intensive care units and 80 on ventilators. A total of 114 patients were discharged in the last 24 hour reporting period.

In regards to cases related to in-school transmissions as of Nov. 17, the state has tracked 179 school outbreaks and 1,026 cases linked to those outbreaks since the 2021/2022 school year starting Aug. 7, up 19 outbreaks and 166 cases from the week previous.

Health officials noted 121 long-term care facilities are currently reporting at least one case of COVID-19, accounting for a total of 1,185 of the cases, broken down between 646 residents and 539 staff.

The state’s official death total will now be reported as those that are lab confirmed, sits at 8,669 on Nov. 18. The facilities are reporting to the state 8,006 residents deaths and 145 staff deaths.