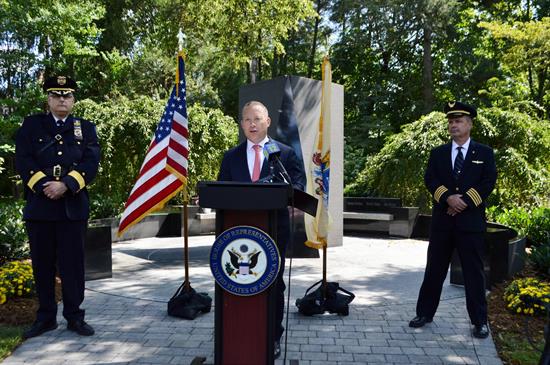 As Americans get ready to board airplanes for their Thanksgiving travels, Democratic U.S. Rep. Josh Gottheimer is continuing his push on Capitol Hill to enact more measures to protect the country from terrorist attacks similar to the ones that took place on Sept. 11, 2001.

Twenty years later, Gottheimer has remained to protecting American from ISIS-inspired and lone-wolf homegrown terror, as well as fighting to provide support to help survivors, first responders and their families.

Gottheimer is continuing to call on Congress to pass a bill aimed at fixing what the airline industry views as a major security flaw that still exists two decades after the attacks.

The airline industry has advocated for the mandatory installation of a lightweight security device known as a secondary barrier on commercial aircraft. The barrier aims to create a physical barrier to prevent dangerous individuals from reaching the flight deck any time the cockpit door is open during flight.

Under the Saracini Aviation Safety Act of 2018, which Gottheimer co-sponsored, such barriers are required on newly-built aircraft.

However, no such requirement is in place for existing commercial aircraft. The added barrier is also the only recommendation from the federal 9/11 Commission not yet implemented.

Introduced in March by Gottheimer, along with U.S. Reps. Brian Fitzpatrick (R-PA), Andre Carson (D-IN) and Chris Smith (R-NJ), the Saracini Enhanced Aviation Act of 2021 would require the installation of secondary cockpit barriers on all commercial passenger aircraft to prevent terrorist attacks.

The bill is named for United Airlines Capt. Victor Saracini, who was killed after his plane, Flight 175, was hijacked and flown into the South Tower of the World Trade Center.

Gottheimer said, “On 9/11, terrorists counted on being able to rush and breach the cockpit, knowing that the cockpit doors would be opened early in the flight. The terrorists exploited that weakness. Those flight decks and our flight crews and pilots remain vulnerable today—that is unacceptable.”

“This bill will address that, and it’s part of our work to take every action we can to completely eradicate terror, whether abroad or at home, whether from Al Qaeda or an ISIS-inspired cell or a lone-wolf terrorist,” he added.

Gottheimer is also working to get more funding for a federal program that provides healthcare for those impacted by 9/11-related health conditions. Nearly 3,000 Americans lost their lives in the 9/11 attacks, including 147 from Bergen County. Over the past two decades, more than 2,000 first responders and survivors who were in and around the World Trade Center have died as a result of cancers caused by their toxic exposures.

The World Trade Center Health Program, which is facing a projected shortfall in 2025, was created to provide free health monitoring and medical treatment for those who were exposed the day of the attacks and in the months after, including police officers and firefighters who have struggled with high rates of cancer over the last 20 years.

More than 100,000 responders and survivors from the World Trade Center and lower Manhattan, the Pentagon and the Shanksville, PA crash site are served by the program, according to the US Centers for Disease Control and Prevention (CDC).

Efforts to extend the program were almost derailed by Republican lawmakers, but ultimately passed after a major lobbying push by firefighters and comedian Jon Stewart.

While the program was authorized to serve responders and survivors until 2090, it was not fully funded.

Introduced in August, the James Zadroga 9/11 Responder and Survivor Health Funding Correction Act seeks to address the program’s looming financial shortfall and ensure it has the funding it needs now and in the future.

Bill co-sponsor Gottheimer said, “Many of us have recently introduced the bipartisan Zadroga 9/11 health and compensation act, still focusing on those whose lives we continue to lose, and those we’ve lost who were at the pile — our first responders and others. Do you believe we are taking all the necessary steps? Do you feel that you have what you need? Because we continue to have so many members of law enforcement and firefighters who continue to be sick.”

Passed by a vote of 397-15 on Oct. 19, the Darren Drake Act requires the U.S. Department of Homeland Security to develop and disseminate best practices for vehicle rental companies and dealers to report suspicious behavior to law enforcement, helping them stop potential threats in their paths.

After Drake was killed in an October 2017 ISIS-inspired terrorist truck attract on the West Side Highway in New York City, Gottheimer began working with Drake’s parents, Barbara and Jimmy Drake, to craft and advance legislation in his honor.

Following its passage, Gottheimer said, “This commonsense, bipartisan bill is aimed at stopping ISIS-inspired, lone-wolf, and domestic terrorists from easily acquiring trucks and other vehicles to wreak havoc and cause mass destruction and death. It is an important addition to our arsenal as we work to eradicate threats of terror across our nation and I am proud to have led this initiative — in Darren’s memory — to help prevent future attacks and save lives. It is the least we can do.”

The bill has since been referred to the Senate Committee on Homeland Security and Governmental Affairs.