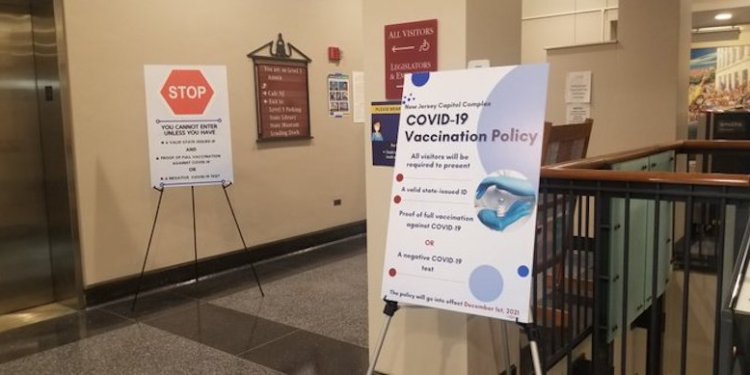 Republican state lawmakers plan to go to court as they fight the COVID-19 health protocols going into effect Dec. 1 that could force New Jersey State Troopers to deny them access to the Statehouse.

State Senators will reportedly file a lawsuit to have the decision by the State Capitol Joint Management Commission to require all persons who wish to enter the Legislative State House, State House Annex and/or Legislative Staff Building on committee days, voting sessions, quorum calls, and for any other meetings or gatherings be fully vaccinated or subject to testing.

The expected move from the members of the upper chamber comes after GOP Assembly members agreed in a virtual meeting on Nov. 24 that if their colleagues are blocked from entering the statehouse, none of them would participate in the next voting session set for Dec. 2.

“This commission—comprised of appointees, not elected representatives—is telling the Legislature and the public that they can’t enter the People’s House,” said Pennacchio. “This edict violates the State Constitution which protects the Legislature from outside interference. Rules that govern the Legislature should come from the Legislature itself, not an unelected body.”

The new protocols require that all those entering the buildings must show ID and proof of full vaccination or a negative COVID-19 PCR test conducted within the previous 72 hours. The policy would apply to elected lawmakers voting in person, all legislative staff members, reporters covering events, and anyone visiting the Statehouse, including those who want to speak at a hearing or protest a bill inside the building.

Besides vaccines and testing, the commission requires masks be worn by everyone in the State Capitol Complex in public areas. For Senate and Assembly galleries, capacity will be limited to 1/3 of the seats and every other chair in committee shall not be used.

When asked about the subject at a press briefing Nov. 29, Gov. Phil Murphy was supportive of the decision taken by the commission and legislative leadership and took exception to the notion the protocols were a mandate as described by Republicans.

“This is not just you need to be vaccinated or show proof of a negative test,” said the governor. “It’s actually got rapid tests at the Statehouse, so there’s no burden whatsoever on anybody outside of that.”

When questioned if State Troopers would arrest lawmakers who were in non-compliance, State Police Superintendent Col. Pat Callahan said “I have a hard time envisioning troopers handcuffing anyone…but I do think they’d have the ability to refuse entry for those men and women. It’s certainly something I would consult with the Attorney General’s office on and would certainly do that if that issue arises.”

“Our members are going to go in—in whatever form they feel comfortable with—and make sure they do their jobs.” Oroho said. “It depends on what the courts say. I think it’s pretty clear in the Constitution that a legislator cannot be stopped. But at the same time we also don’t want our law enforcement to have all kinds of pressures put on them, to be put in that kind of awkward situation.”

Pennacchio argued the protocols are based more on politics than medical science.

“They failed to factor in natural immunity, which has shown to be equal to, if not more effective than vaccines,” Pennacchio claimed. “People can go to a liquor store or casino, stand in line in a shopping area, and pack into a stadium to watch a football game without proof of vaccination, but they will be blocked from watching their elected representatives in Trenton…It doesn’t make sense. This isn’t the way the New Jersey State Government is supposed to be run.”

But Murphy was not having any of the arguments being put forth with new cases and hospitalizations rising and concerns about a new variant.

“Come on, man. Let’s not play politics,” said Murphy. “I think anybody who is messing with this is being completely reckless. Looking at the numbers, they’re going up. This is about keeping people safe and healthy. Let’s stop playing politics for something that is not intended.”

As for those that have passed, the state reported 42 confirmed deaths, bringing that total to 25,563. The state listed probable deaths at 2,827, bringing the overall total to 28,390. State officials noted six deaths occurred in the last 24 hours of reporting that have not yet been lab confirmed.

The state reported 1,046 patients were hospitalized with 70 of the state’s 71 hospitals reporting, the first time above 900 since Oct. 5. By region, there were 379 in the North, 377 in the Central and 290 in the South. Of those hospitalized, 195 are in intensive care units and 105 on ventilators. A total of 85 patients were discharged in the last 24 hour reporting period.

In regards to cases related to in-school transmissions as of Nov. 30, the state has tracked 217 school outbreaks and 1,172 cases linked to those outbreaks since the 2021/2022 school year starting Aug. 7, up 23 outbreaks and 87 cases from the week previous.

Health officials noted 125 long-term care facilities are currently reporting at least one case of COVID-19, accounting for a total of 1,205 of the cases, broken down between 627 residents and 578 staff.

The state’s official death total will now be reported as those that are lab confirmed, sits at 8,698 on Nov. 30. The facilities are reporting to the state 8,021 residents deaths and 145 staff deaths.

New Jerseyans Concerned About A Woman’s Right to Choose