New Jerseyans Concerned About A Woman’s Right to Choose 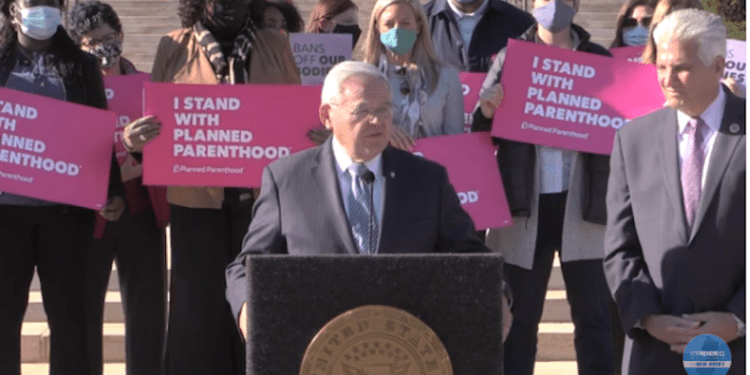 Menendez and Murphy were joined by Planned Parenthood members and other advocacy groups to highlight what was at stake.

“The threat to Roe v. Wade has never been graver. And that is why our commitment to reproductive rights must be stronger and louder and more unshakeable than ever,” said Menendez.

“Reckless new laws limiting or dismantling Roe v. Wade will only serve to endanger the health and safety of millions of people without wealth, privilege or power, and particularly women of color,” said First Lady Murphy.

The Supreme Court will begin dissecting the Texas law known as S.B.8, which would ban abortions after six weeks. The law would not provide exceptions for rape or incest.

Additionally, the law would allow private citizens to sue doctors and anyone who “aids and abets” a woman seeking an abortion, with the Supreme Court already hearing oral arguments on cases connected to the law.

“It should not matter if you live in New Jersey or New York or Texas or Mississippi – the right to make private medical decisions is protected by the U.S. Constitution and belongs to every American,” said Menendez.

The rally comes as New Jerseyans are increasingly worried about the future of Roe v. Wade with a conservative majority sitting on the bench of the U.S. Supreme Court.

That’s according to the latest Rutgers-Eagleton Poll, which was conducted in collaboration with New Jersey Policy Perspective. What’s more, that study found about half of the state’s residents wanted to see the state pass laws to protect and expand access to abortion care.

Two-third of New Jerseyans reported being “very” (41%) or “somewhat” (24%) concerned about the Supreme Court potentially overturning the landmark case in the future.

Meanwhile, 13% reported they were “not very” concerned and 6% were “not at all” concerned.

“Abortion rights have always had support in New Jersey for as long as the Rutgers-Eagleton Poll has asked the issue,” said Ashley Koning, an assistant research professor and director of the Eagleton Center for Public Interest Polling at Rutgers University–New Brunswick.

“In fact, New Jerseyans have continually been opposed to any state laws restricting abortion access for the past about three decades,” she said.