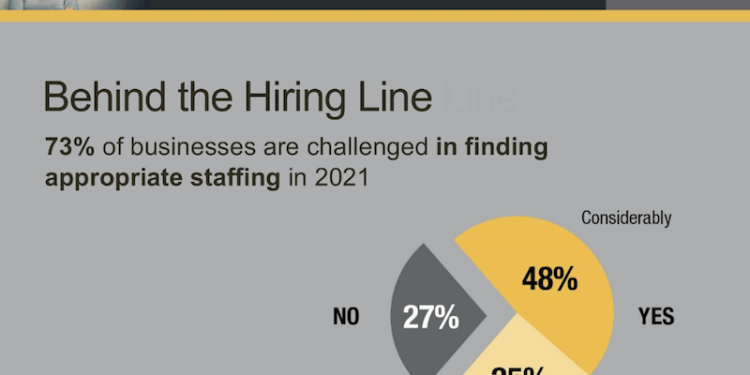 The New Jersey Business & Industry Association (NJBIA) said three in four business owners in the Garden State reported they were challenged to find appropriate staffing in 2021.

That’s according to NJBIA’s 2022 Business Outlook Survey, which found 48% of business owners reported being considerably challenged by the current labor situation. Twenty-five percent said those challenges were manageable.

The report also found nearly the same amount of businesses raised wages, with some doing so considerably. According to the report, only 13% of New Jersey businesses increased hiring this year.

State Sen. Steve Oroho (R-24) noted the state must do more to help small businesses stay afloat during the pandemic, saying all of New Jersey should be worried about the NJBIA survey results.

“We should be extremely concerned when nearly 60% of business owners tell us they are ready or willing to shut their doors for good due to government mandates and restrictions, lower revenues, and other challenges related to operating in New Jersey during the pandemic,” said Oroho.

Oroho positioned the report alongside a March NJBIA publication which found nearly a third of New Jersey businesses had ceased operations since the beginning of 2020.

“Instead of an effective and comprehensive relief plan, the administration is releasing little dribs and drabs of funding in a way that’s not really helping anyone. Hopefully, the NJBIA survey is a wake-up call for the Murphy administration,” he concluded.

Post-pandemic challenges related to staffing, restrictions, and lower revenue have caused some business owners to re-evaluate how long they want to keep a hold on their enterprises.

Thirty-seven percent of respondents said they did no plan to change their future plans due to the challenges of the last 20 months, but 28% said they would look to sell or cease their business sooner than anticipated.

A full 31% noted they are still determining whether their plans will change.

“When nearly 60% of employers are either looking to end their businesses sooner, or considering it, due to these continued obstacles, it should be a red flag for our policymakers who might consider more mandates or policies that make it more costly to do business in New Jersey,” said NJBIA President and CEO Michele Siekerka.

Following are some other results from the survey:

The report is based on 601 valid responses. Most respondents were small businesses, with 73% employing 24 or fewer people.