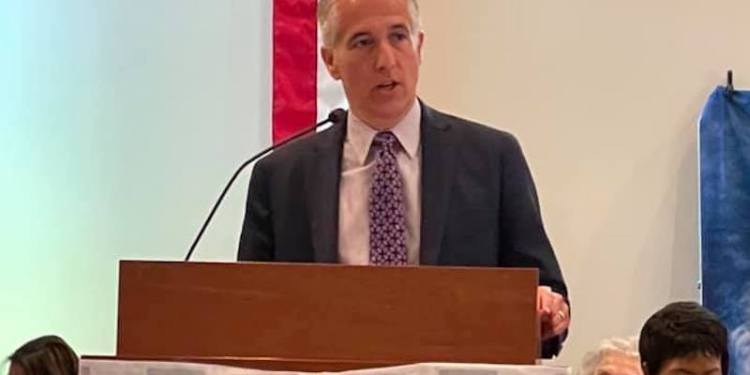 A North Jersey Republican is taking aim at the commission that is the center of the COVID-19 health protocols controversy this week as the state reported over 5,000 positive tests on Dec. 3 and the highest total of confirmed new cases since Jan 29 of this year.

Assemblyman Christopher DePhillips (R-40) is putting forth a bill to shakeup the State Capitol Joint Management Commission. The bill would increase the commission’s legislative representation to eight members from four and remove voting rights from the four executive branch members.

“The governor’s office does not even occupy the capitol complex, but they want to tell the legislative branch how to operate. They are completely overstepping their authority and attempting to derail democracy,” said DePhillips.

The actions of the commission have come under scrutiny from members of GOP due to their unhappiness with the new statehouse policy that went into effect Dec. 1. The new protocols require that all those entering the buildings must show ID and proof of full vaccination or a negative COVID-19 PCR test conducted within the previous 72 hours. Additionally, on sight rapid tests were available to all entrants. The commission policy applies to elected lawmakers voting in person, all legislative staff members, reporters covering events, and anyone visiting the Statehouse, including those who want to speak at a hearing or protest a bill inside the building.

Besides vaccines and testing, the commission requires masks be worn by everyone in the State Capitol Complex in public areas. For Senate and Assembly galleries, capacity will be limited to one third of the seats and every other chair in committee shall not be used.

Republicans have fought back against the commission’s requirements. On the day the protocols went into effect, both incoming minority leaders filed a lawsuit to stop the rules from being put in place. A judge said he will hear oral arguments on the motion Dec. 13 on claims that the requirements are unfair to the public and unconstitutional.

After the actions by the GOP Assembly resulted in a nearly three hour delay in the Assembly for its session, Assembly Speaker Craig Coughlin (D-19) stated he was “outraged that 28 members of the minority caucus could not be bothered to exhibit the decency or humanity (just) to have a couple minutes on the TV news. To be clear, in the midst of this sacrifice the only thing that was asked of the legislators here today to do was to show that they weren’t infected, to care about their colleagues and the people in the chamber.”

DePhillips’ bill would give Senate and Assembly minority leaders two appointments each to the commission. Additionally, executive branch members would be responsible for executive facility management and the others would oversee the legislative portions of the capitol complex.

“My bill restores a commonsense balance and ensures the appropriate separation of powers,” DePhillips said. “It is imperative that we give lawmakers who were elected to serve as the voice of their constituents a seat at the decision-making table. Any matters that concern the legislative process and people’s ability to participate fully in that process must include legislators.”

As for those that have passed, the state reported 14 confirmed deaths, bringing that total to 25,607. The state listed probable deaths at 2,827, bringing the overall total to 28,434. State officials noted eight deaths occurred in the last 24 hours of reporting that have not yet been lab confirmed.

The state reported 1,112 patients were hospitalized with all of the state’s 71 hospitals reporting. By region, there were 419 in the North, 384 in the Central and 309 in the South. Of those hospitalized, 208 are in intensive care units—surpassing 200 statewide for the first time since Oct. 26— and 93 on ventilators. A total of 143 patients were discharged in the last 24 hour reporting period.

In regards to cases related to in-school transmissions as of Nov. 30, the state has tracked 217 school outbreaks and 1,172 cases linked to those outbreaks since the 2021/2022 school year starting Aug. 7, up 23 outbreaks and 87 cases from the week previous.

Health officials noted 132 long-term care facilities are currently reporting at least one case of COVID-19, accounting for a total of 1,236 of the cases, broken down between 651 residents and 585 staff.

The state’s official death total will now be reported as those that are lab confirmed, sits at 8,702 on Dec. 3. The facilities are reporting to the state 8,024 residents deaths and 145 staff deaths.