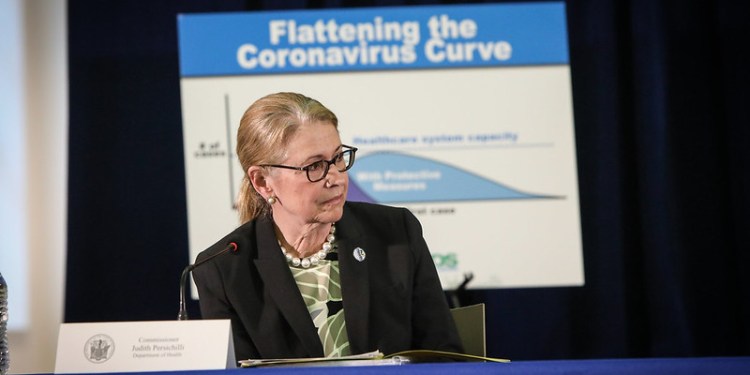 With the first recorded confirmed case of the Omicron variant, Gov. Phil Murphy opined that it was still too early to tell what the effect this new strain of the coronavirus will be in New Jersey.

The first confirmed test in the Garden State was that of a fully vaccinated adult female, a Georgia resident who had recently traveled to South Africa. Since testing positive on Nov. 28, the woman has remained in isolation with moderate symptoms and is now recovering after receiving care in a North Jersey emergency department. The New Jersey Department of Health laboratory performed sequencing on the specimen to confirm it was the Omicron variant.

“The Omicron variant is among us and we need to take steps to stop its spread. It is vital that residents remain as vigilant as possible as we await more information about the variant,” said Murphy in a press statement Dec. 3. “Vaccinations and mask wearing have proven to be an effective tool to reduce the spread of COVID-19, and I urge everyone ages 18 and over to receive a booster.”

After an event on the next day, Murphy stressed that “early evidence” suggests the variant is more transmissible with more moderate symptoms.

“As we were saying for the past week, we just assumed it was in our state,” the governor said in comments after a ceremony in Carteret. “My gut tells me this is the first of many to come. Folks need to be vigilant, wearing (their) masks, getting vaccinated, getting boosted. Because so far at least, there’s no evidence that lineup is not working.”

The need for a booster shot was backed up by officials at the New Jersey Department of Health (NJDOH), who offered studies showing protection against the virus and the ability to prevent infection may decrease over time. While more than 70% of New Jerseyans have received their primary vaccine series, only 31% of residents eligible have received a booster.

“With cases increasing and the identification of the Omicron in the state, the fight against COVID-19 is not over,” said NJDOH Commissioner Judith Persichilli. “We are still learning about the Omicron variant, but we have tools to stop the spread of the virus, most important among them is to get vaccinated and get a booster dose. The public should continue to mask up, get tested if they have symptoms, physically distance, avoid crowded events, stay home when sick and wash hands frequently.”

Additionally, NJDOH suggested that New Jersey residents who attended the Anime NYC 2021 Convention at the Javits Center in New York City from Nov. 19-21 should get a COVID-19 test as soon as possible, monitor for symptoms and seek medical help if they are sick.

The recommendation came following news that a Minnesota resident who attended the conference tested positive for the Omicron variant.

“Our expectation is that we have individuals in New Jersey who attended the convention and may potentially be at risk,” said Persichilli. “I urge anyone who attended to get tested as soon as possible to stop potential spread of this variant and protect themselves, their families and communities.”

On Nov. 26, 2021, the World Health Organization classified this new variant, B.1.1.529, as a Variant of Concern and named it Omicron; four days later, the United States concurred with the classification. NJDOH has been working with other states, local health departments, clinical laboratories, hospitals, and Centers for Disease Control and Prevention (CDC) to rapidly identify individuals who may have been infected with the Omicron variant.

As for those that have passed, the state reported seven confirmed deaths, bringing that total to 25,635. The state listed probable deaths at 2,830, bringing the overall total to 28,456. State officials noted 13 deaths occurred in the last 24 hours of reporting that have not yet been lab confirmed.

The state reported 1,227 patients were hospitalized with all of the state’s 71 hospitals reporting. By region, there were 442 in the North, 429 in the Central and 356 in the South. Of those hospitalized, 240 are in intensive care units and 94 on ventilators. A total of 118 patients were discharged in the last 24 hour reporting period.

In regards to cases related to in-school transmissions as of Nov. 30, the state has tracked 217 school outbreaks and 1,172 cases linked to those outbreaks since the 2021/2022 school year starting Aug. 7, up 23 outbreaks and 87 cases from the week previous. According to state officials, the cases account for 735 students and 125 teachers across 19 counties.

Health officials noted 129 long-term care facilities are currently reporting at least one case of COVID-19, accounting for a total of 1,245 of the cases, broken down between 653 residents and 592 staff.

The state’s official death total will now be reported as those that are lab confirmed, sits at 8,707 on Dec. 6. The facilities are reporting to the state 8,029 residents deaths and 145 staff deaths.