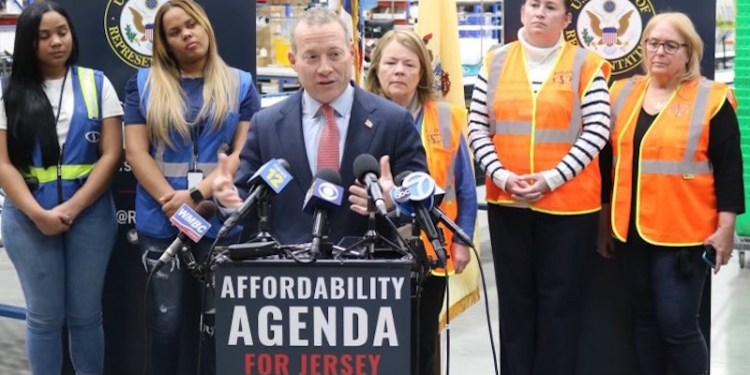 Rep. Josh Gottheimer believes Democrats have a winning story to tell on how his party is making the lives of Americans better with their policy initiatives.

But in an exclusive interview with North-JerseyNews.com days before he announced his Affordability Agenda for Jersey, Gottheimer made it clear that Dems have to be more aggressive in extolling the benefits of the Bipartisan Infrastructure Bill and the Build Back Better Act that will better the lives for all Americans.

The four pillar agenda the Congressman announced Dec. 6 addresses pocketbook issues that affect every resident of the 5th District, from abolishing the state and local tax (SALT) cap to tackling the supply chain issues driving up prices across the U.S. to ensuring residents can work and live comfortably in the Garden State. It’s a message that Gottheimer believes his party needs to do more of.

But his focus first is for the state he calls home.

“We need to fight to make it more affordable to have people stay here,” Gottheimer told North-JerseyNews.com. “I am working very hard to attract business and keep jobs here to help small businesses grow. That means we need to make life more affordable for folks and small businesses, cut out the bureaucratic red tape so that our state is more welcoming to businesses of all sizes because that is the key to our economy.”

The Affordability Agenda for Jersey that the Congressman announced in Mahwah is a combination of explaining the benefits of the recently signed into law physical infrastructure investments, issues such as childcare and lowering prescription drug costs addressed in the House version of the Build Back Better Act and new legislative actions, including the COVID-19 Supply Chain Relief Act and requesting President Joe Biden to activate the National Guard and the United States Transportation Command fleet to help move critical supplies.

“My new Affordability Agenda for Jersey is action we can take right now to help our families and small businesses with the COVID-driven impact on our economy,” said Gottheimer. “It includes aggressively addressing our COVID-driven supply chain crisis, combatting our dependence on foreign manufacturing, (and) working to get fuel and energy prices down.”

Highling the push is the COVID-19 Supply Chain Relief Act that the Bergen County resident will be introducing in the coming days. The new legislation calls for the institution of a federal Supply Chain Czar and establishing individual regional supply chain leaders to help coordinate interstate response to supply chain disruptions, shortages, and increased prices.

It would allow states to deploy unused COVID-19 relief funds to help address supply chain bottlenecks in their states and begin a 30-day countdown clock on the U.S. Departments of Commerce and Transportation to report to Congress and the public on the major current chokepoints in our nation’s supply chain.

“Our ports are incredibly backed up right now. While things have improved, there are still about forty container ships still waiting to get unloaded at the Ports of Los Angeles and Long Beach,” noted Gottheimer. “Plus, container prices coming from China are up ten fold.”

But he noted that even after the ships are unloaded, “they are often stuck because we don’t have enough longshoremen and longshorewomen at the ports to unload them. There are also too few places to store the goods once they’re off, and too few trucks, truck drivers, and rail cars to move those goods to their final destination.”

To get those goods moving off the ports is where the push for the activation of the National Guard comes into play. Gottheimer stressed that the Guard is designed to handle national emergencies like this.

“Just as they were activated to distribute vaccines, we should activate the Guard to help move critical goods, so that they are not at the mercy of jammed supply chains,” he said. “We should utilize the National Guard and these non-combat ships only for the most critical items, like essential pharmaceuticals and hospital supplies, that our country depends upon.”

“These ships are designated for these purposes—they can carry up to 150 containers—many of them are sitting idle, or are moving goods back from Europe and Asia and have capacity. These steps will help ease supply chain disruptions at our ports and across the country.”

Compounding the affordability crisis is the rising energy costs New Jerseyans are facing just as Winter arrives. Gottheimer is pushing for a combination of more production both domestically and internationally of gas and oil and tapping into the Strategic Oil Reserve while continuing to invest in wind and solar energy projects. The congressman reiterated his support for the reconciliation package investments that the House recently passed to make clean energy more affordable.

“We need an all-of-the-above approach to energy, including utilizing our vast supply of natural gas. In the immediate term, the President and the whole of the Administration must continue to work with domestic producers to increase production and processing,” he said.

Gottheimer praised the Biden Administration for its tough line in instances of price gouging and other anti-competitive behavior.

“As we’ve opened back up and the COVID crisis wanes, demand has spiked markedly,” he commented. “It takes time to get things moving again, and it hasn’t helped that OPEC—representing the major energy-producing countries—has decided to use this opportunity to squeeze our families for a few extra dollars.”

The final two pillars to make North Jersey more affordable are tied to the current Build Back Better legislation being crafted in the Senate after passing the House last month.

Gottheimer was a lead negotiator in passing legislation out of the lower chamber that reinstates SALT deduction to help cut taxes for North Jersey families. And two issues that he hears about most at his stops in Sussex, Warren, Passaic or Bergen counties is lowering prescription drug costs and making childcare more affordable.

The House version of the bill helps lower seniors’ out-of-pocket prescription drug costs, including capping the price of insulin at $35-a-month, and ensuring families do not pay more than 7% of their annual income on childcare each year.

Gottheimer believes explaining the details of the benefits to the American people is a blueprint the members of his caucus must follow if they hope to retain Congress next year.

“I want Democrats to be aggressive in selling what we have gotten done to help people, help families,” said Gottheimer. “Like in New Jersey, for me, we have to make sure that we tell the story about SALT, about our roads and bridges, getting broadband to our rural areas, getting lead and other forever chemicals out of our drinking water, helping with storm relisancy and getting the Hudson Tunnels built.”

“These are all things that people care about day-to-day,” he continued. “We need to be reminding folks of the ways it helps families. We (can’t) just talk about the bill numbers; (we have to tell them) how it actually helps people. We have to explain to them what is in it so they know why it is so great for New Jersey.”

Since the House passed its legislation, Gottheimer has been crisscrossing the district doing just that. Stops have included a water treatment facility in Haworth, under a Route 4 bridge in Hackensack and talking to small business owners about how the investment in infrastructure will benefit their businesses in all four counties.

“I want to go to these places to show them how we are going to make their lives better,” he said.  “If you are going to have an economy that grows here, you actually need infrastructure that works. Businesses do not want to be here if people can not get around the district, and you can’t actually commute.”

Besides the upgrade of roads and mass transit, the cost and availability of childcare is an issue that the congressman has heard along his stops.

“It’s very important for small businesses to recruit and keep key people. I hear that all the time from folks, the commute is rough,” said Gottheimer. “But lots of parents bring up the cost of childcare as an issue of going back to work. Finding childcare remains a big challenge for families.”

But the biggest issue for Gottheimer is making sure the $10,000 cap SALT, which he played a key role in ensuring its inclusion as well as being focused to help residents of the Garden State, is removed and gets passed by Congress.

“SALT is so important to our middle class families. For us, the cop and teacher making a combined $200,000, their median property tax is over $15,000,” he stated. “When they did the tax hike bill in 2017, people’s taxes went up and not down where we live. We need to fight to make it more affordable to have people stay here. To me that is a very, very important priority.”

The congressman believes the inability to pass these bills before election day played a role in the surge of voters casting a ballot for Republicans Nov. 2.

“We have to show people that we can get stuff done like we have in the last couple of weeks and we have to be responsible,” said Congressman. “Overall, a lot of the down pressure is coming from the top, from Washington. The administration’s numbers being low hurt a lot of our races in New Jersey.”

As for looking ahead to defending his seat in 2022, Gottheimer stated he is focused on “doing a good job for the people that I represent, getting stuff done” and being judged on those criteria as he works to make North Jersey more affordable.