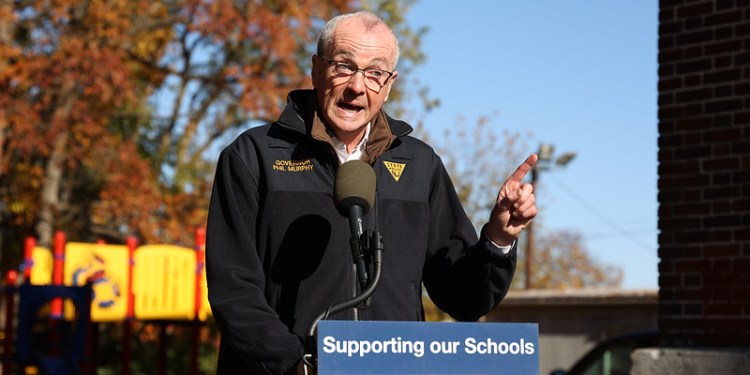 A couple of days after the Oxford school shooting in Michigan, Gov. Phil Murphy renewed his push for a comprehensive gun safety bill package to be introduced in the current legislative session.

“Over the past four years, New Jersey has become a national leader on gun safety,” said Murphy in announcing a suite of bills in Metuchen Dec. 2. “We must continue to build on that progress and make our state safer for the over nine million people who call New Jersey home.”

The legislation if passed would be the third wide-ranging gun safety package signed by Murphy since taking office in 2017.

“I am proud to further commit to this goal, and I hope to work with my Legislative partners to take this step by the end of this legislative session,” the governor said.

“Supporting this bill package alongside the Governor today, represents just the latest installment in our ongoing effort to lead the nation on fair and robust common-sense gun safety laws,” said Assembly Speaker Craig J. Coughlin (D-19), who joined Murphy in supporting the bills.

Specifics of the Bills

The package of bills would work to ensure firearms were handled safely. The proposed laws would mandate firearm safety training and specific storage rules were designed to address the handling of guns.

Additionally, certain guns would be banned outrights, including .50 caliber firearms. Loopholes for acquiring out-of-state firearms would be closed as well, requiring firearm owners who move to New Jersey to obtain a firearm purchaser identification card (FPIC) and register their firearms within 30 days of residing in the state.

Law enforcement officers would be provided with new tools to address gun violence. One Assembly bill would would require manufacturers or dealers of handgun ammunition to keep a detailed electronic record of ammunition sales, and report ammunition sales to the State Police. A second would  would require within a year that firearm manufacturers incorporate microstamping technology into new handguns sold in New Jersey, providing law enforcement with a tool to quickly link firearm cartridge casings found at the scene of a crime to a specific firearm, without having to recover the firearm itself.

School district shooting drills would be established under a bill in the package, as well. New Jersey schools currently are required to conduct active shooter exercises but guidelines are not specific about how those drills should be conducted.  The Governor proposes authorizing the Department of Education to establish trauma-informed and age-appropriate standards for lockdown drills.

“As we seem to hear about nearly every week in our country, gun violence remains a menace to society,” said State Senator Loretta Weinberg (D-37). “In the interest of keeping our streets safe and our schools and houses of worship secure from gun violence, we need to continue to do what we can where we can to bolster New Jersey’s already existing strong gun safety laws, and to give our law enforcement agencies all the tools they need to prevent more gun-related deaths and injuries in the future.”

During Murphy’s first term, New Jersey established a “red flag” law for gun violence protective orders and criminalized firearms trafficking, background checks were strengthened, better reporting through the establishment of the Rutgers Gun Violence Research Center was enacted and a data-sharing partnership with New York, Pennsylvania, and Connecticut was commenced.