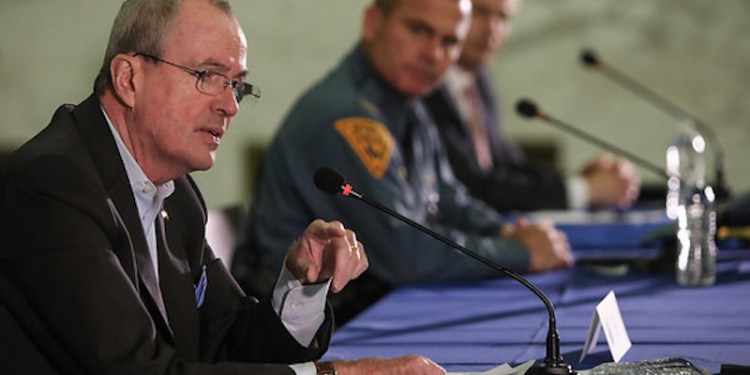 The comments came after New Jersey State Police Superintendent Colonel Patrick Callahan was asked why lawmakers were allowed to access the Assembly floor without going through the same health protocols that staffers, members of the public and media had to adhere to as they entered the Statehouse as set forth by the State Capitol Joint Management Commission.

But before Callahan could offer an answer, Murphy stepped in to state that security details is something that is not discussed in public, and that would be the instance in this case. It’s a statement that Murphy would repeat when three other reporters attempted to ask Callahan about the incident.

Murphy’s eruption continued as he stated “This is not about freedom or civil rights, (it’s about) their willingness to volitionally run the risk of infecting innocent, law-abiding folks who have done the right things during this pandemic.”

At issue were GOP lawmakers unhappiness with the new statehouse policy that went into effect Dec. 1. The new protocols require that all those entering the buildings must show ID and proof of full vaccination or a negative COVID-19 PCR test conducted within the previous 72 hours. Additionally, on sight rapid tests were available to all entrants. The commission policy applies to elected lawmakers voting in person, all legislative staff members, reporters covering events, and anyone visiting the Statehouse, including those who want to speak at a hearing or protest a bill inside the building.

While GOP Assembly members were initially stopped for about 15 minutes crying “tyranny” from accessing the Assembly floor—including Assemblyman Hal Wirths (R-24) and Parker Spence (R-24)—Assemblyman Brian Bergen (R-25) eventually led lawmakers in defying the regulations as they walked past the officers assigned because they would not physically restrain them from gaining access onto the floor.

When he finally gavelled in the session after a three hour delay, Assembly Speaker Craig Coughlin (D-19) stated he was “outraged that 28 members of the minority caucus could not be bothered to exhibit the decency or humanity (just) to have a couple minutes on the TV news. To be clear, in the midst of this sacrifice the only thing that was asked of the legislators here today to do was to show that they weren’t infected, to care about their colleagues and the people in the chamber.”

The speaker later added that “there’s been a colossal failure of security here at the Statehouse. This is something we cannot tolerate.”

The role of the State Police has come under focus since that day. While Callahan later reiterated that “we take the security of that Statehouse seriously and will continue to do so,” no answers were given for plans for the next voting season, any role that the governor’s office had in the assignment of the troopers at the Statehouse doors or the reported reassignment of troopers after the incident.

Answers were sought as due to the confusion over the role that NJSP would or can play in enforcing the commission’s edict. In a letter before the rules went into effect, acting attorney general, Andrew Bruck, had reportedly told Coughlin and Senate President Steve Sweeney that the state police would check for vaccination proof.  Question arose after the nonpartisan New Jersey Office of Legislative Services opinion that a legislator who declines to follow a new COVID-19 policy cannot be arrested, but that the legislature itself could enforce their own rules to exclude the in-person presence of a member.

As for those that have passed, the state reported 24 confirmed deaths, bringing that total to 25,688. The state listed probable deaths at 2,830, bringing the overall total to 28,518. State officials noted 17 deaths occurred in the last 24 hours of reporting that have not yet been lab confirmed.

The state reported 1,409 patients were hospitalized with all of the state’s 71 hospitals reporting. By region, there were 506 in the North (the first time over 500 since May), 467 in the Central and 436 in the South. Of those hospitalized, 261 are in intensive care units and 117 on ventilators. A total of 158 patients were discharged in the last 24 hour reporting period.

Health officials noted 142 long-term care facilities are currently reporting at least one case of COVID-19, accounting for a total of 1,259 of the cases, broken down between 644 residents and 615 staff.

The state’s official death total will now be reported as those that are lab confirmed, sits at 8,712 on Dec. 8. The facilities are reporting to the state 8,033 residents deaths and 145 staff deaths.

In regards to cases related to in-school transmissions as of Dec. 8, the state has tracked 248 school outbreaks and 1,345 cases linked to those outbreaks since the 2021/2022 school year starting Aug. 7, up 31 outbreaks and 173 cases from the week previous. According to the state dashboard, new student cases totaled 3,024 and new staff cases 858 in the last week. Cumulatively, 31,482 cases have been reported— 25,781 students and  5,701 staffers.