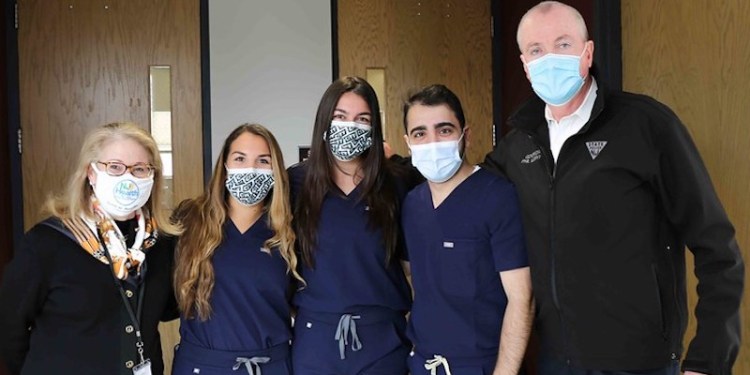 A shortage seen at the beginning of the coronavirus pandemic is happening again at Garden State hospitals as the state reported a single-day high for new cases since the first month of this year.

Gov. Phil Murphy and New Jersey Department of Health Commissioner Judith Persichilli confirmed reportes of a nursing shortage at hospitals in New Jersey at their most recent COVID-19 press briefing.

Persichilli said during a virtual meeting Dec. 8 that the issue is a result of three things happening at once: staff burnout, retirements and nurses being “bought out” with better job opportunities for private nursing.

“(Nurses are receiving) very attractive packages from staffing agencies for individuals to leave the employ of a hospital and work as an agency nurse or, sometimes depending on where they’re working, a traveling nurse,” said Persichilli.

The commissioner added “that’s a difficult circumstance because in some cases they’re not only bought out, they’re then sold back to the hospitals that they had just left. That’s a situation that it’s really somewhat out of our control.”

State officials said they are working with the hospitals to develop operating and economic models that attract and keep nurses at hospitals as well as recruiting more individuals entering the profession.

“I’m pleased to report that enrollees in nursing programs are definitely up,” said Persichilli, who is a nurse herself. “They are…one of the many heroes…through this pandemic and are being recognized as such. Young individuals want to follow in their footsteps.”

But the workload during the pandemic has taken its effect on nurses. Persichilli noted the workload of nurses over the last 22 months in taking care of patients that are suffering from COVID at the worst of the surges.

“We’ve had, particularly the first surge, (nurses) seeing their friends and colleagues fall sick and some of them dying as a result. The nurses are tired, and they’re burned out,” said the commissioner. “There are a number of individuals, nurses that have worked a really long time in our hospitals that were either at retirement or close to retirement…because of the circumstances that they’ve worked through decided to retire.”

Murphy highlighted the issues as part of the broader issues currently being seen in the current job market.

“You’ve got a mismatch between openings and folks who are able and willing to work,” said the governor. “In healthcare, you add to the fact that going on 22 months of just incredibly hard realities for these people, which makes the folks who are unvaccinated getting sick and willfully ignoring the science and going into these hospitals and adding to their burden even more unacceptable.”

As a result of the tightening job market, hospitals are winding up competing against each other and paying more to hire those same staffers back. But Murphy shot down the suggestion that the state should regulate the market to help the private healthcare companies.

As for those that have passed, the state reported 17 confirmed deaths, bringing that total to 25,713. The state listed probable deaths at 2,830, bringing the overall total to 28,543. State officials noted 11 deaths occurred in the last 24 hours of reporting that have not yet been lab confirmed.

The state reported 1,526 patients were hospitalized at 70 of the state’s 71 hospitals that reported. By region, there were 593 in the North, 494 in the Central and 439 in the South. Of those hospitalized, 279 are in intensive care units and 121 on ventilators. A total of 191 patients were discharged in the last 24 hour reporting period.

In regards to cases related to in-school transmissions as of Dec. 8, the state has tracked 248 school outbreaks and 1,345 cases linked to those outbreaks since the 2021/2022 school year starting Aug. 7, up 31 outbreaks and 173 cases from the week previous. According to the state dashboard, new student cases totaled 3,024 and new staff cases 858 in the last week. Cumulatively, 31,482 cases have been reported—25,781 students and 5,701 staffers.

Health officials noted 152 long-term care facilities are currently reporting at least one case of COVID-19, accounting for a total of 1,259 of the cases, broken down between 659 residents and 647 staff.

The state’s official death total will now be reported as those that are lab confirmed, sits at 8,718 on Dec. 10. The facilities are reporting to the state 8,034 residents deaths and 145 staff deaths.