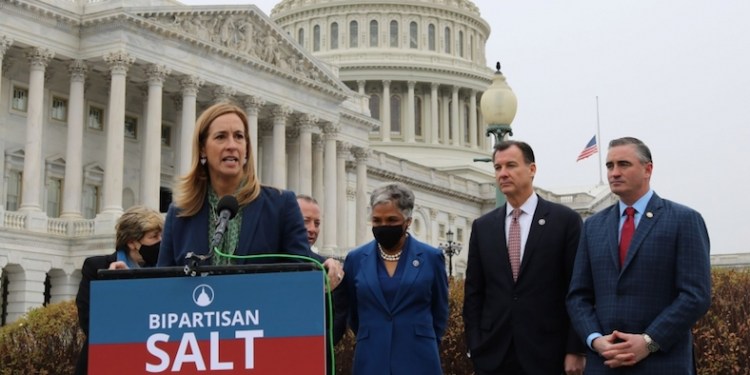 Rep. Mikie Sherrill (D-11) continues to press her case that Congress must raise the current $10,000 cap on the federal tax deduction for state and local tax (SALT) payments.

Sherrill called the SALT deduction “critical” to constituents in her North Jersey district during a Dec. 8 press conference where she was joined by fellow North Jersey lawmaker, Rep. Josh Gottheimer (D-5), other Democratic congressional colleagues, and union leaders. They pressed the U.S. Senate to follow the House’s lead and include SALT relief in the Senate version of the reconciliation package.

“When we’re standing here today and we see our teachers here, when we see our firefighters here, we’re talking about the backbone of the organizations that got us through COVID,” Sherrill said.

‘Kneecapped by the SALT Cap’

“These are people that we really couldn’t have made it through the darkest days of the pandemic without,” Sherrill said. “And to see that they’re getting kneecapped by the SALT cap is really devastating. Not only are our middle-class families paying the price, but our communities are paying the price—and they’re paying for it with the services we all rely on. That’s why we are calling on the Senate to ensure the SALT deduction is addressed in the final version of this bill.”

“We are here today to fight for tax cuts for the hard-working families we represent, like the firefighters, teachers, and first responders who support communities across the country and in Northern New Jersey,” Gottheimer said.

“By reinstating the State and Local Tax deduction, we will be putting money right back into the pockets of hard-working Jersey families and families around the country,” he added. “Now, I am again asking our Senate colleagues to keep moving forward, to include restoring SALT as part of their legislation.”

Reps. Joyce Beatty (D-OH) and Tom Suozzi (D-NY) spoke in favor of raising the $10,000 cap as well. Additionally, President of the American Federation of Teachers Randi Weingarten and President of the International Association of Fire Fighters Edward Kelly urged the Senate to include language raising the SALT deduction cap in the Senate reconciliation bill.

“We’re fighting for the revival of SALT because working families need it,” Weingarten said.

Former President Trump’s 2017 tax cut legislation included language limiting to $10,000 the amount of state and local tax payments that taxpayers could deduct on their federal returns.

The U.S. House passed its version of President Biden’s Build Back Better Act (H.R. 5376) on Nov. 19—a measure containing climate and energy provisions, universal preschool, and child-care funding, among other Democratic priorities. The bill additionally would raise the SALT cap to $80,000 for tax years 2021 through 2030, before lowering the cap again to $10,000 for 2031, after which the cap would expire permanently.

The proposal has prompted criticism as mainly benefiting affluent taxpayers—both from progressive groups that typically align with Democrats on tax and social policy and from the more progressive wing of congressional Democrats.

Senate Democrats are in talks to modify the SALT cap language. New Jersey Sen. Bob Menendez has pushed to limit SALT cap relief reportedly at $400,000 so that mainly middle-income taxpayers would benefit.

But Sherrill and Gottheimer contend that a lot of ordinary, middle-class people in their districts are harmed by the $10,000 cap. Sherrill said in a press release that before the SALT deduction was capped, 54% of families in her district took the deduction.

North Jersey’s Bergen, Essex and Union Counties are among the six counties in the country with the highest median property tax payments, according to a September analysis by the Tax Foundation.

In a recent interview with North-JerseyNews.com, Gottheimer described SALT relief as his biggest issue.

“SALT is so important to our middle-class families. For us, the cop and teacher making a combined $200,000, their median property tax is over $15,000,” he said. “When they did the tax hike bill in 2017, people’s taxes went up and not down where we live. We need to fight to make it more affordable to have people stay here. To me that is a very, very important priority.”