Gov.: “The booster is not a bonus, it is a necessity” 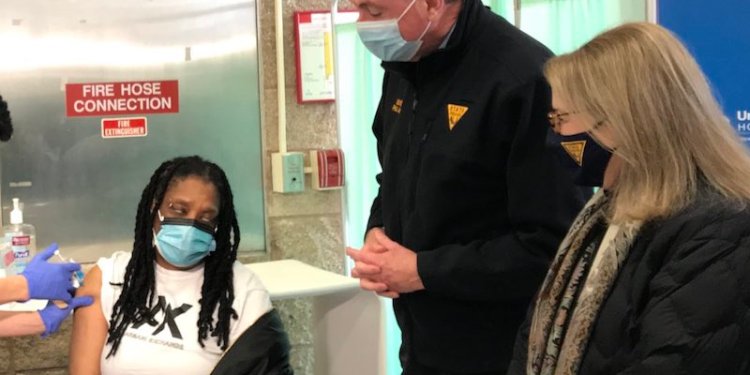 State officials warned that a COVID-19 boost is needed for those who are fully vaccinated on the one-year anniversary of the first vaccinations in New Jersey.

Gov. Phil Murphy and health officials returned to Newark University Hospital where the first vaccine shot was administered Dec. 15, 2020. They came together to deliver the message that the fight against coronavirus continues, with new variants and rising hospitals driven mainly by those unvaccianted.

“There is much work to do…but we are in a much stronger place than where we were a year ago,” said Murphy. “But we need more New Jerseyans to step back into that queue to get boosted. The booster is not a bonus, it is a necessity.”

New Jersey Department of Health Commissioner Judith Persichilli noted that those who live, work, and study in the state with 73% of residents fully vaccinated and 84% with at least one dose of vaccine. The commissioner warned earlier this week that the state is modeling about 3,500 patients for the peak of the surge next month.

“With waning immunity and increased holiday travel and gatherings, it is critical for everyone to maintain their protection against this virus,” said  Persichilli. “Over 4.7 million people are eligible for booster doses in New Jersey and yet only about 37% have gotten that additional shot of protection so far. We must do better.”

Persichilli and Murphy took the anniversary of the first shot to promote Boost NJ Day in their continuing effort to get as many as those willing vaccinated against the coronavirus. The official touted their efforts to make getting one of the three vaccines more accessible as vaccination sites across the state offered walk-in booster appointments.

“Walk-in availability and extended hours are important to make access to boosters as easy as possible,” said Persichilli. “This virus is unrelenting…with Delta and Omicron, the battle is beginning again.”

The push comes as a Winter surge of cases has begun and efforts to educate the public the need for an additional shot due to the waning effectiveness of the vaccine and a new variant becoming more widespread. There have been nearly 800,000 deaths nationwide and nearly 50 million cases in the country, including more than 100,000 new cases a day.

“With cases increasing, it is critical that more residents get boosters because we know immunity is waning,” said  Persichilli. “We are seeing breakthrough cases. Although on average 80% of the patients in our hospitals with COVID as their principal diagnosis are unvaccinated there are still 20% individuals in our hospitals that are vaccinated and most likely are infected due to decreasing immunity.”

State Epidemiologist Dr. Christina Tan added earlier this week that health officials are seeing cases proportionately impacting younger populations, especially in school, in general more so than some of our older populations.

“ If you look at our epidemic curve, we’re seeing an increase in the last several weeks, probably due to a combination of not only the holiday surge but also the fact that we know that there is some waning immunity,” said Tan. “That’s why the importance of getting that booster shot is really critical for us to get ahead of the epidemic curve continuing to go up.”

The vaccine is now available for those aged 5 and up. The booster shot eligibility was expanded over the weekend to include any older than 16 and at least six months from receiving their last shot of Pfizer or Moderns or two months for the Johnson & Johnson dose.

But Tan explained that the case rates between comparing vaccinated versus unvaccinated individuals continues to widen.

“What we’re seeing here in New Jersey is…a divergence where individuals who are unvaccinated represent a higher slope, while individuals who are vaccinated represent a less steep slope in comparison,” she said. “The difference between those two lines is increasing, meaning that there definitely is a difference between those who are getting vaccinated versus those who are unvaccinated becoming hospitalized.

“It’s something like a several-fold increase in hospitalization chances if you’re unvaccinated.”

As for those that have passed, the state reported 30 confirmed deaths, bringing that total to 25,808. The state listed probable deaths at 2,835, bringing the overall total to 28,643. State officials noted 22 deaths occurred in the last 24 hours of reporting that have not yet been lab confirmed.

The state reported 1,730 patients were hospitalized as all of the state’s 71 hospitals reported. By region, there were 674 in the North, 576 in the Central and 480 in the South. Of those hospitalized, 328 are in intensive care units and 146 on ventilators. A total of 233 patients were discharged in the last 24 hour reporting period.

In regards to cases related to in-school transmissions as of Dec. 15, the state has tracked 294 school outbreaks and 1,618 cases linked to those outbreaks since the 2021/2022 school year starting Aug. 7, up 47 outbreaks and 273 cases from the week previous.

Health officials noted 180 long-term care facilities are currently reporting at least one case of COVID-19, accounting for a total of 1,413 of the cases, broken down between 691 residents and 722 staff.

The state’s official death total will now be reported as those that are lab confirmed, sits at 8,735 on Dec. 15. The facilities are reporting to the state 8,036 residents deaths and 145 staff deaths.