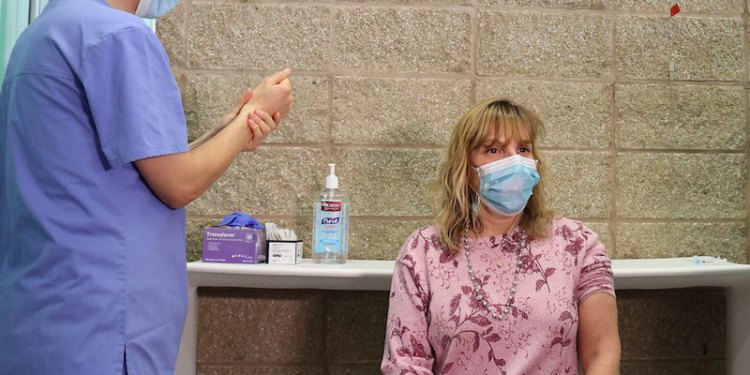 The new data comes from a number of factors according to state health officials. They include more activities being moved indoors where the virus is more easily spread; holiday gatherings; waning immunity from the first doses of the COVID-19 vaccine; and a new, more easily transmissible variant.

The high number of new cases comes the day after the year anniversary of the first New Jersey residents receiving their initial COVID-19 vaccine dose. Gov. Phil Murphy and others used the day to push more those who have not yet to received their booster shot.

“There is much work to do…but we are in a much stronger place than where we were a year ago,” said Murphy. “But we need more New Jerseyans to step back into that queue to get boosted. The booster is not a bonus, it is a necessity.”

While breakthrough cases are increasing, the majority of cases and, more importantly, hospilizations is that of the unvaccinated. Health officials stated earlier this week that the unvaccinated are going into the hospital for COVID at a rate six times those of the vaccinated

“What we’re seeing here in New Jersey is…a divergence where individuals who are unvaccinated represent a higher slope, while individuals who are vaccinated represent a less steep slope in comparison,” State Epidemiologist Dr. Christina Tan. “The difference between those two lines is increasing, meaning that there definitely is a difference between those who are getting vaccinated versus those who are unvaccinated becoming hospitalized.

Murphy reminded besides getting vaccinated, wearing a mask indoors when you do not know the vaccination status of those assembled, social distancing, staying home if you are sick and getting tested are the best practices to curtail the spread of the virus.

The governor earlier this week reiterated that all of the protocols should be followed in order to prevent New Jersey’s hospital system from being overrun as they are experiencing a nursing shortage. The state reported 1,756 COVID-19 patients in the state’s 71 hospitals; comparatively, 3,669 coronavirus patients were hospitalized the same date last year.

“We can afford high positive case numbers as a general matter but we can not break the capacity of our hospitals,” said Murphy. “I say that as a numerical matter, nevermind the fatigue (and) stresses of nurses and other healthcare staff. It just doesn’t need to be that way.”

As for those that have passed, the state reported 16 confirmed deaths, bringing that total to 25,824. The state listed probable deaths at 2,835, bringing the overall total to 28,659. State officials noted 18 deaths occurred in the last 24 hours of reporting that have not yet been lab confirmed.

The state reported 1,756 patients were hospitalized as all of the state’s 71 hospitals reported. By region, there were 703 in the North, 563 in the Central and 490 in the South. Of those hospitalized, 335 are in intensive care units and 155 on ventilators. A total of 225 patients were discharged in the last 24 hour reporting period.

In regards to cases related to in-school transmissions as of Dec. 15, the state has tracked 294 school outbreaks and 1,618 cases linked to those outbreaks since the 2021/2022 school year starting Aug. 7, up 47 outbreaks and 273 cases from the week previous.

Health officials noted 187 long-term care facilities are currently reporting at least one case of COVID-19, accounting for a total of 1,479 of the cases, broken down between 724 residents and 755 staff.

The state’s official death total will now be reported as those that are lab confirmed, sits at 8,735 on Dec. 15. The facilities are reporting to the state 8,038 residents deaths and 145 staff deaths.

Malinowski Ready to Run on A Record of Accomplishment