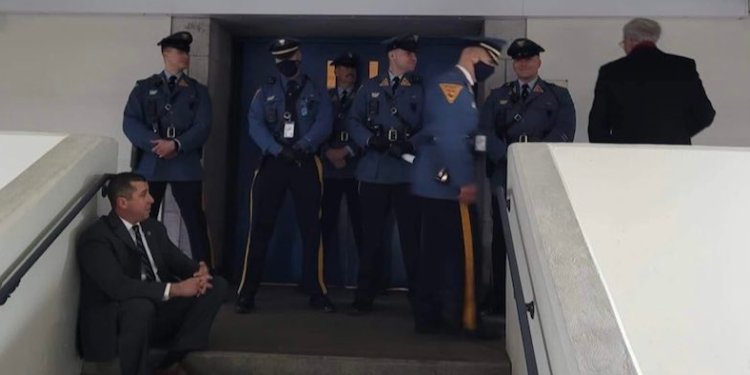 Another showdown over COVID-19 Statehouse protocols left some North Jersey lawmakers unable to enter the building that holds the Assembly and State Senate.

Auth sent out a tweet that morning, which read ”Barred from entering the Statehouse and performing our duty. Luckily, I’m not alone Assembly members @JayWebberNJ @Sdimaso @votebergen @NJAsmGerry @Robert_Auth & Erik Petersen all standing strong for our Constitutional right. #LeadRight #EnoughIsEnough”

GOP lawmakers throughout the day addressed a group of anti-vaxx and mask protestors who showed up outside on the statehouse grounds to show their support. When voting started at 1 p.m., those who were unable to access the building voted remotely instead.

Those same legislators led an effort upending a busy state Assembly session with nearly 100 bills to be voted upon. The GOP lawmakers denied access repeatedly commented on measures that would normally sail through in minutes, slowing the session to a crawl and frustrating Democrats who control the chamber. The marathon session—which was also beset by technical problems at points—began shortly after 1 p.m. and ended at 12:13 a.m., more than 11 hours later.

“We have a fair and sensible policy that seems all the more reasonable as new COVID-19 case numbers have risen rather alarmingly to levels above 6,000 per day,” said Coughlin. “I am glad members on both sides of the aisle chose to show up with respect for their colleagues, staff, and the public today. This is what happens when we come to the table with a spirit and willingness to do our jobs: the people’s business.”

“Despite the desperate efforts of several members of the minority party to delay important legislation, we succeeded in passing major mental health legislation for our students, took steps on gun safety, honored our service members and veterans, furthered our support for economic development in Atlantic City, and kept commitments to safeguard our natural resources.”

At issue were GOP lawmakers unhappiness with the new statehouse policy that went into effect Dec. 1. The new protocols require that all those entering the buildings must show ID and proof of full vaccination or a negative COVID-19 PCR test conducted within the previous 72 hours. Additionally, on sight rapid tests were available to all entrants. The commission policy applies to elected lawmakers voting in person, all legislative staff members, reporters covering events, and anyone visiting the Statehouse, including those who want to speak at a hearing or protest a bill inside the building.

While GOP Assembly members were initially stopped for about 15 minutes crying “tyranny” from accessing the Assembly floor—including Assemblyman Hal Wirths (R-24) and Parker Spence (R-24)—Bergen eventually led lawmakers in defying the regulations as they walked past the officers assigned because they would not physically restrain them from gaining access onto the floor.

After expressing his dismay at his fellow legislators, Assembly Speaker Craig Coughlin (D-19) added that “there’s been a colossal failure of security here at the Statehouse. This is something we cannot tolerate.”

The role of the State Police has come under focus since that day. While Acting New Jersey State Police Superintendent Colonel Patrick Callahan later reiterated that “we take the security of that Statehouse seriously and will continue to do so,” Gov. Phil Murphy and Callahan had refused to answer plans for the next voting season, any role that the governor’s office had in the assignment of the troopers at the Statehouse doors or the reported reassignment of troopers after the incident. They did so again at a press briefing Dec. 20.

The move by GOP Assembly members for Dec. 20 was not unforeseen. Assemblyman Webber had notified the state attorney general’s office he was preparing to go to court and would not submit to a COVID-19 test or provide proof of vaccination to gain entry into the Statehouse complex.

A judge denied the request later in the day.

As for those that have passed, the state reported 11 confirmed deaths, bringing that total to 25,888. The state listed probable deaths at 2,842, bringing the overall total to 28,730. State officials noted 16 deaths occurred in the last 24 hours of reporting that have not yet been lab confirmed.

The state reported 1,902 patients were hospitalized in full reporting of the state’s 71 hospitals. By region, there were 774 in the North, 618 in the Central and 510 in the South. Of those hospitalized, 359 are in intensive care units and 181 on ventilators. A total of 190 patients were discharged in the last 24 hour reporting period.

In regards to outbreaks related to in-school transmissions as of Dec. 15, the state has tracked 294 school outbreaks and 1,618 cases linked to those outbreaks since the 2021/2022 school year starting Aug. 7, up 47 outbreaks and 273 cases from the week previous.

Health officials noted 205 long-term care facilities are currently reporting at least one case of COVID-19, accounting for a total of 1,645 of the cases, broken down between 734 residents and 787 staff.

The state’s official death total will now be reported as those that are lab confirmed, sits at 8,737 on Dec. 20. The facilities are reporting to the state 8,047 residents deaths and 145 staff deaths.