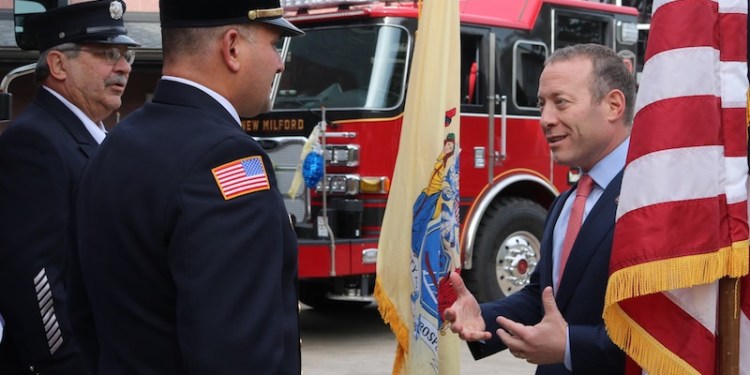 Rep. Josh Gottheimer, back in New Jersey while Congress is in recess, is touting his success in bringing federal grant money home to his Fifth District constituents.

New Jersey’s 5th Congressional District has clawed back 112% more federal tax dollars from Washington and what Gottheimer calls “Moocher States” since he took office in 2017, according to the lawmaker at a Dec. 16 press event.

Appearing with first responders at the Paramus Fire Department, Gottheimer said he has worked with mayors, town councils, first responders, and nonprofits to bring federal grant money home to all of the four North Jersey counties he serves. The fruit of those efforts has been an average savings of $415 for each household in the Fifth District in 2020, he said.

This savings is in addition to the more than $3 billion the 5th CD received from federal COVID-19 relief packages that Congress passed in 2020, according to Gottheimer.

Leaving ‘Gobs’ of Federal Money on the Table

“When I ran for Congress five years ago, I realized that we were leaving gobs of federal grants, equipment, and other dollars on the table every year for the simple reason that we weren’t applying—and you didn’t have a Member of Congress who was willing to fight for those dollars,” Gottheimer said at the event.

Gottheimer was referring to his predecessor in the Fifth District, Republican Scott Garrett, who held the seat from 2003 until the Bergen County resident unseated him in 2017.

Instead, Gottheimer said those federal grant monies went to “Moocher States like Mississippi and Alabama.”

“There are all of these grant programs out there for everything from security grants to protect churches and temples; and investments to better equip, recruit, and pay our first responders; and, historically, we just hadn’t applied for many of them. And the person in my seat didn’t push for them,” said the federal lawmaker.

Gottheimer said his office has done just that, expending a lot of effort to make sure Bergen, Passaic, Sussex and Warren county constituents’ federal tax dollars end up helping North Jersey. He said he created a full-time staff position, “Director of Return on Investments,” just to focus on the issue.

“We started applying and fighting for that return on investment that we deserved, given what we pay — which, I believe, is far too high at every level — federal, state, and local, you name it,” he said. “It’s also why I’ve been fighting so hard to restore the State and Local Tax Deduction, to help cut taxes, as part of my Affordability Agenda for Jersey.”

Gottheimer added that the process of applying for federal grants can be complicated and “having a point person who knows how to really dig around to find that USDA Rural Agriculture grant or FEMA Non-Profit Security Grant or resources for school breakfast and lunch is vital.”

Federal Law Enforcement Support Office grants enabled 10 towns and police departments in North Jersey to obtain more than $3.5 million worth of surplus federal equipment and resources. For Oradell, this translated to $24,000 worth of floodlights to improve first responders’ visibility at emergency sites.

Westwood clawed back $355,000 for a portable kitchen truck to help the community following major disasters. Additionally, Washington Township clawed back a pick-up truck and a 4×4 vehicle worth a combined $103,000, and Ringwood clawed back $27,000 in equipment.

“Getting our tax dollars back home is not a Democrat or Republican issue — it’s a purely what’s good for hardworking Jersey families and businesses issue, and it’s about cutting taxes and helping make life more affordable,” Gottheimer said.