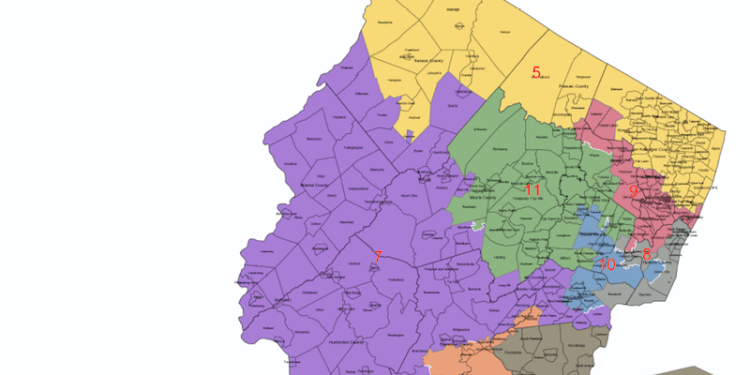 In the end, the New Jersey Congressional Redistricting Commission tie breaking vote from retired Judge John Wallace came down to who was next in line.

Wallace, appointed to the state’s commission tasked with drawing the 13 Congressional District maps for the Garden State, accepted the Democrats’ version at a meeting Dec. 22. In his statement, the former Supreme Court Justice complimented both sides presenting him with good maps.

“Both delegations adequately applied our standards to their map. Both maps comply with the federal population mandate. Both satisfy the Voting Rights Act. Each contains five majority minority districts. Both maps considered communities of interests,” Wallace said.

“In the end, I decided to vote for the Democratic map simply because the last redistricting map was drawn by the Republicans.”

The map was then approved by a 7-6 margin along party lines with Wallace casting the deciding vote in a meeting that lasted 15 minutes Wednesday morning. The commission of six Democrats and six Republicans had held 11 public meetings since being formed earlier this year.

The map approved results in the redrawing of all six North Jersey Congressional Districts. According to various analyses, the new maps strengthen the 5th District for Rep. Josh Gottheimer and the 11th for Rep. Mikie Sherrill. But to balance that off, Rep. Tom Malinowski running in the 7th becomes even more vulnerable than forecasted.

The sprawling 7th district decreases to a +4 Biden district from a +10 in 2020. The district was redrawn to pick up all of Warren County and nine towns in Sussex—Andover Township, Byram, Fredon, Green, Hopatcong, Ogdensburg, Sparta, Stillwater and Walpack. Additionally, Mendham Borough and part of Mendham Township in Morris, all of Scotch Plains, Fanwood and Rahway and part of Linden are now part of the district. Bridgewater and Hillsborough would be split between the 7th and 12th districts.

Being subtracted from the 7th are Millburn in Essex and Dover in Morris to the 11th, Cranford, Garwood, Kenilworth and the entirety of Union Township in Union to the 10th, and Montgomery, North Plainfield, Rocky Hill in Somerset to the 12th.

Changes in the 11th Congressional District doubles the 2020 Biden margin to nearly 15 points. The district currently headed by Sherrill adds the Essex County towns of Belleville, Glen Ridge, Maplewood, Millburn, and South Orange as well as Dover in Morris County.

Caldwell, Essex Fells, Verona, and all of West Orange would move to the 10th district, and four Sussex County municipalities would be split between the 5th and 7th districts. Four Passaic County municipalities— Bloomingdale, North Haledon, Pompton Lakes and a part of Wayne— would no longer be represented by the Navy veteran.

Gottheimer’s district would no longer include any Warren County municipalities and the deletion of six Sussex towns –Andover Borough, Walpack, Green, Stillwater and Fredon—where recently announced candidate Mayor John Flora had declared his candidacy to be the GOP nominee to face the sitting Congressman. All of those moves would shift the 5th to a Biden’s 2020 margin of 12 points, up from its current 6 point advantage.

Republican members of the Congressional Redistricting Commission released a statement after the decision that read in part “We cannot convey enough how disappointed we are in the final product of this process. This decade’s redistricting of New Jersey Congressional boundaries was hijacked by a liberal operative hiding under the cloak of bipartisanship. The resultant map was rigged for Democrat success.”

The GOP complained that the influence of the Princeton Gerrymandering Project, claiming the metrics they used were created to favor Democratic drawn maps and oppose Republican drawn maps.

“Republicans were never given a real chance to win Chairman Wallace’s support,” they added.”Our map was designed to empower New Jersey voters. The final map is the antithesis of that. Our map provided voters, including minority voters, with meaningful opportunities to impact elections and met or exceeded every other standard we were provided.”

Conversely, Democratic State Chairman Leroy Jones, Jr. proclaimed the new Congressional map “meets the principles that we aspired to at the outset of this process and ensures that we have fair districts that will enhance minority representation and accurately reflect the partisan and demographic composition of our state.”