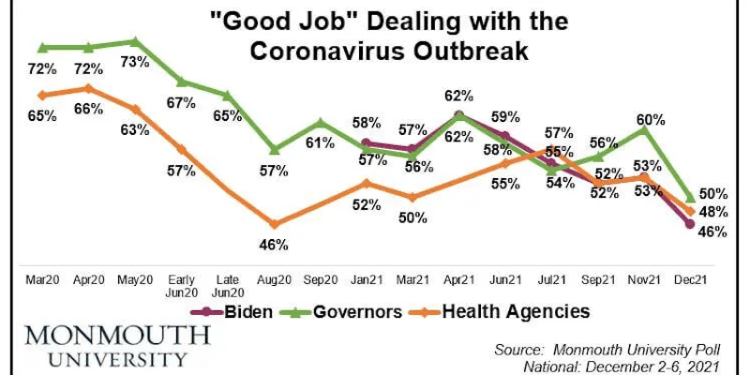 A majority of Americans are fed up with the coronavirus pandemic. And their frustrations do not appearing to be going away anytime soon as New Jersey reported for the second consecutive day a single-day record for new COVID-19 cases.

The latest Monmouth University Poll  found a majority of Americans felt “worn down” by the pandemic’s effect on their daily lives, and nearly half reported being “angry” about the current dynamic.

“The fact that Americans say they have had enough should be no surprise,” said Patrick Murray, director of the independent Monmouth University Polling Institute. “Every time we try to adjust to a new normal, another variant pops up to put us on guard again. This perpetual unease is having an impact on how we view those charged with handling the pandemic.”

Support for vaccination requirements faltered as well, dropping to 46% from the 53% reported in September. The national poll was conducted was from Dec. 2 to 6, before the latest surge of the coronavirus has swept through the U.S. that has resulted in an increase in cases and a number of hospitals being fill to capacity with COVID-19 cases.

The publics’ view of mandated mask usage continues to shift. Support for instituting, or reinstituting, face mask and social distancing guidelines dropped to 55%, compared to 52% in July and 63% in September.

The American public was split on whether President Joe Biden had done a good job (46%) or bad job (46%) in handling the pandemic.

Prior to this poll, Biden had consistently rated in net positive territory, with 53% of Americans saying he did a good job as recently as November. Of note, most of the decline in Biden support came from states Biden won in 2020, where only 47% of voters say he is doing a good job, compared to 60% in November.

“We just came out of an off-year election in Virginia and New Jersey where blue states did not look so blue. The failure to get COVID under control may be playing a role there, especially for independent voters, in a growing sense of frustration with the party in power,” said Murray.

Unlike many recent Monmouth University Polls, there was less partisan difference in responses to the question. Sixty-four percent of Republicans and 63% of Democrats said they were at least a little worn out by the pandemic-related changes.

Anger, however, showed a partisan divide. Sixty-three percent of Republicans reported feeling angry, with only 34% of Democrats sharing this viewpoint.

As for those that have passed, the state reported 33 confirmed deaths, bringing that total to 25,980. The state listed probable deaths at 2,842, bringing the overall total to 28,822. State officials noted 22 deaths occurred in the last 24 hours of reporting that have not yet been lab confirmed.

The state reported 2,241 patients were hospitalized in full reporting of the state’s 71 hospitals. By region, there were 983 in the North, 690 in the Central and 568 in the South. Of those hospitalized, 399 are in intensive care units and 200 on ventilators—reaching 200 for the first time since May 2. A total of 316 patients were discharged in the last 24 hour reporting period.

Health officials noted 271 long-term care facilities are currently reporting at least one case of COVID-19, accounting for a total of 1,796 of the cases, broken down between 947 residents and 2,183 staff.

The state’s official death total will now be reported as those that are lab confirmed, sits at 8,744 on Dec. 23. The facilities are reporting to the state 8,049 residents deaths and 145 staff deaths.