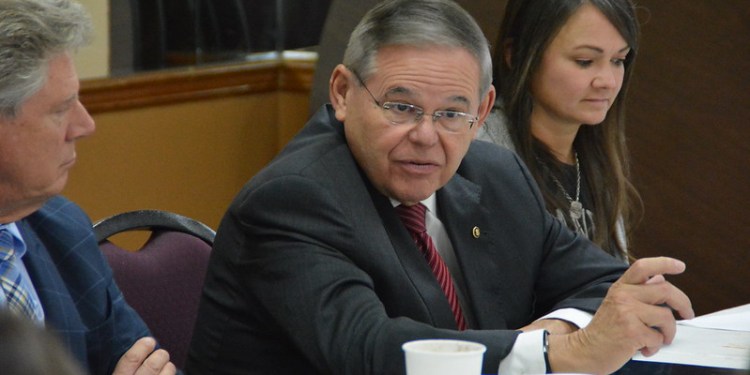 Sen. Bob Menendez is rallying the Senate to pass relief for Superstorm Sandy survivors and asking them to help prevent the Department of Housing and Urban Development (HUD) from clawing back funds received to help those who tried to repair their homes.

“It has been nine years since Hurricane Sandy devastated New Jersey, New York, and the northeast. Despite some members efforts to block disaster relief for our region, we succeeded in securing billions in [Community Development Block Grant-Disaster Recovery] funding,” Sen. Menendez said recently during a Banking, Housing, and Urban Affairs Committee hearing.

Menendez, a senior member of the committee, noted HUD was beginning to claw back CDBG-DR money given to Sandy survivors through Small Business Administration (SBA) loans.

“Nine years later, HUD is attempting to claw back from New Jerseyans the money they used to repair their homes and get back on their feet,” he said.

Since Superstorm Sandy hit New Jersey’s shores, Menendez has been an advocate for survivors in the state, and for those affected in different regions, as well.

In 2018, Congress passed the Disaster Recovery Reform Act to end the policy of SBA loans duplicating with CDBG-DR grants.

Of note, the law gave the agencies the ability to claw back funding for survivors from 2016 through 2021, leaving New Jersey’s Sandy survivors at risk of having their money taken back from them.

Earlier in 2021, the House of Representatives passed a provision in the appropriations bill to give authority to HUD secretary to waive claw backs due to Superstorm Sandy.

“While I appreciate that Congress prevented this issue for survivors from 2016 and onward, I hope my colleagues will work together with me to pass relief that the House of Representatives passed earlier this year in its appropriations bill, so these Sandy survivors can finally close this dark chapter of their lives,” Menendez said.

Looking to the Future

Additionally, Menendez argued CDBG-DR spending in the future should be directed at mitigation and resiliency projects to prepare for coming natural disasters.

“You will be hard-pressed to find a place in the country that is not impacted by climate change and natural disaster. Whether it’d be flooding in my state, wildfires in the West, and chronic droughts across the heartland, every single state will inevitably need assistance,” the senator said.

The New Jersey senator noted long-term financial benefits as for every dollar invested in mitigation, the federal government saves $6 in disaster relief spending.