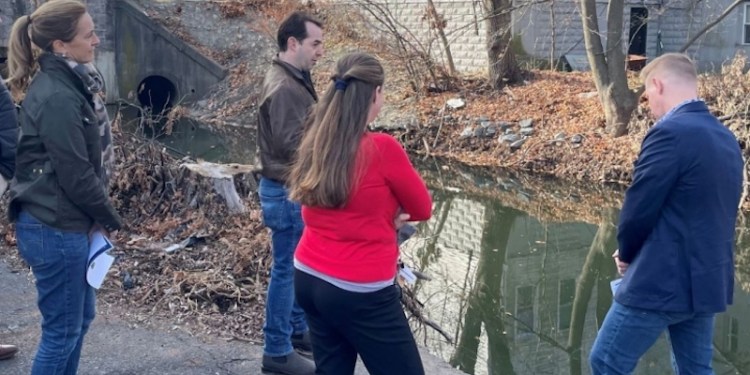 On Dec. 17, Rep. Mikie Sherrill welcomed officials from the Army Corp of Engineers and the EPA to environmental clean-up sites with New Jersey’s 11th Congressional district with monies from the recently passed federal bipartisan infrastructure bill.

Sherrill was joined by New Jersey Department of Environmental Protection (NJDEP) Commissioner Shawn LaTourette and the Army Corps of Engineers in surveying high-risk flooding zones in Morristown, Verona, and Montclair.

Sherrill spoke alongside Army Corps of Engineers workers about flooding in North Jersey, and pointed to historic flooding that hit the area in September 2021 as Tropical Storm Ida tore through the state.

“So many communities and families are still recovering months later after Hurricane Ida swept through our region, and northern New Jersey has faced similar devastating damage from historic storms over and over again over the last few years,” said Rep. Sherrill.

Sherrill noted funding from the recently-passed Infrastructure and Jobs Act would help make communities more resilient in the face of flooding, and said teamwork would be needed going forward.

“For that reason, I want to thank the Army Corps of Engineers for joining me today in NJ-11 to examine some of the areas at risk here and discuss how we can continue to work together to protect all of our communities,” she said.

“It is just one of the many examples of how this infrastructure law is bringing funding directly back to NJ-11 to address real needs facing New Jersey and our families, making our communities stronger for generations to come,” she said.

New Jersey has more Superfund sites than any other state in the nation, with 10 residing in NJ-11 alone.