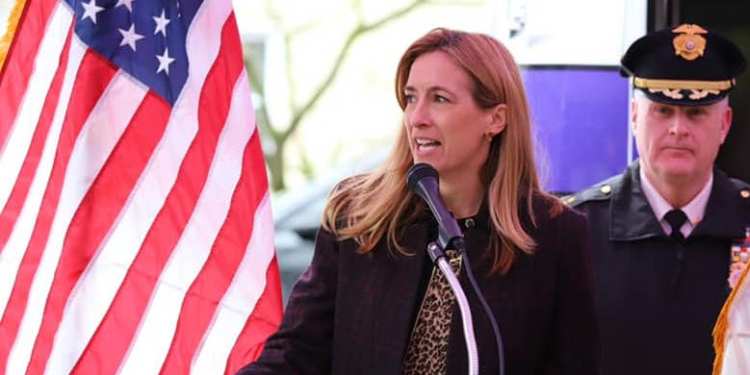 Rep. Mikie Sherrill was one of the first members of Congress to offer a first-hand account that the attack on the U.S. Capitol a year ago was much more organized then what we could comprehend then and even now.

In an exclusive interview with North-JerseyNews.com this week, Sherrill reflected on what happened that day and what it means for us as a country.

The riot at the Capitol came on the day that members of Congress to confirmed the election of Joe Biden to be the 46th President of the United States. As the crowds gathered outside and eventually stormed both the U.S. Senate and House of Representatives, politicians were forced to flee to safety as the mob of Trump supporters roamed the hallways and attacked police officers protecting those who worked in the Capitol building.

Sherrill said when the House was finally able to resume business she felt “a great deep anger that people who had sworn the same oath to the constitution that I have sworn would try to undermine our constitution, would try to come up with a plan that the President of the United States that had been voted out of office by the American people could stay in office.”

“I have been defending this country since I was 18 years old and to think that American citizens would try to act against all of us, in our say in our government and our rights as American citizens and to take those rights away…I was furious.”

The other word the Morris County lawmaker used to describe that day was “proud” despite all the attempts of the then-President Donald Trump to stop that process.

“To go back to that chamber that night to certify the elections…I felt very proud to be doing that at a time when the country needed that very much,” she said. “I felt proud of my colleagues as I know that many of them were afraid to do that and maybe anger wasn’t their first emotion…but they went out nevertheless certify the elections. I was proud to return to that chamber that was still standing showing that our system had held.”

But the 11th Congressional District representative does share the same feeling for all of her colleagues in Washington, expressing disappointment that “in the aftermath of that day when the President of the United States sent a group of people to attack Congress as Congress was certifying our elections, not every single person in Congress voted to hold him accountable. That remains a point of disappointment for me and I continue to find that hard to understand.”

Despite being able to offer an eyewitness account on what happened in the 24 hours before the attack, Sherrill has not been interviewed by the bipartisan team looking into the attacks but has confidence in the work they have produced so far.

“I guess it depends on the evidence they are gathering if they need more information to corrabite it,” she said. “As a former federal prosecutor, I can tell that they are working hard on subpoenas and interviewing people, so we will see what comes of that and where their investigation leads them.”

The North Jersey House member offered that the committee is doing critical work that continues to bring to light some very important facts about actions in the day’s leading up to the attack and afterwards.

“It is so important that we continue to get to the bottom of what happened,” she said.

Sherrill acknowledged that the true battlefield now is fighting disinformation—and in this case that some will always look at Joe Biden as an illegitimate President despite it being proven over and over again that there was no election fraud on any scale that would have Donald Trump winning the 2020 Presidential Campaign.

The two-term member of Congress noted that despite the divisions, lawmakers in Washington have been able to come together to pass legislation that addresses the problems of today and tomorrow.

“The worst part to me is that we are so close, but the division is quite frankly driven by the extremists. Most American want to see our government thrive and legislation passed.”

Sherrill brought up the passage of President Biden’s infrastructure bill that had support on both sides of the aisle, including Senate Minority Leader Mitch McConnell (R-KY)

“(McConnell) the Republican leader of the Senate—who let me tell you as a member of the House of Representatives, never votes for anything,” she laughed. “We were able to come together to do these things for the country. We are united in so many ways but I think I would dearly love to see this country coming together so that we can face a lot of the trials and tribulations we have right now.”

But on the first anniversary of the Jan. 6 attack that resulted in the death of five Americans and injuries to 138 police officers, Sherrill explained why it is still so important to keep fighting for Democracy in America.

“I think it is easy sometimes to take them for granted. We can just never do that because these are too important for the way we live our lives and how we want children to live their lives.”