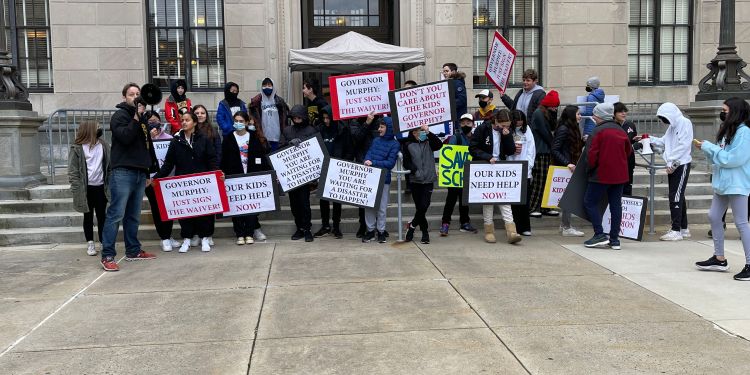 Four months after 1,000 students at Cresskill Middle/High School were displaced due to damage caused by Tropical Storm Ida, it remains uncertain when they’ll return to in-person learning on a full-time basis.

While district officials are doing whatever they can to get students back into the classroom, they are facing numerous challenges, including the high cost of repairs, frustrated families and a significant amount of red tape.

When remnants of the storm tore through Cresskill on Sept. 1, the combined middle and high school building took on several feet of water, causing extensive damage to its HVAC system of boilers, pumps and univents, along with the auditorium, media center, desks and chairs.

Altogether, the school sustained more than $20 million worth of damage — about half of the district’s annual operating budget.

After exploring numerous options for funding the repairs, which include private donations and county financing, district officials believe the “most time efficient, cost effective and reliable solution” is through a combination of federal and state aid.

According to the district, the Federal Emergency Management Agency (FEMA) is expected to reimburse up to 75% of project costs, while state aid and local taxes will cover the remainder.

Voters Get A Say

However, the district needs up-front funding to move forward on restoration work before federal and state funding is reimbursed.

Since, by law, the district cannot enter into a long-term borrowing agreement without voter approval, the school board has opted to hold a bond referendum later this month. A passed referendum, along with fast-track assistance from the state, could allow the district to finalize professional contracts and order supplies by the end of February and begin work in March.

Cresskill Schools Superintendent Michael Burke has said while there is no chance of getting the school back up and running before the current academic year ends in June, he is hopeful for a return in September.

‘We Keep Running Into Roadblocks’

Parents have said they believe the district is doing what it can to move forward, but that the state could be doing much more to speed up the school’s reopening.

Ida dealt her blow just days before Cresskill was due to officially welcome back students after they spent a year learning remotely due to the coronavirus pandemic.

For the short-term, students have resumed in-person learning once a week on a rotating basis at St. Therese School, a shuttered Catholic school in Cresskill that the district is able to use for 10 months.

Published reports stated negotiations with Temple Emanu-El in Closter that has classrooms that are used only after regular school hours grew serious, but in the end the arrangements didn’t work out.  Another possibility is a Korean church in Northvale, where if a deal can be negotiated, Cresskill’s middle- and upper-school students would be able to attend. But the costs for busing students their may be a roadblock as well.

Already worried about the academic, social and emotional impacts that virtual schooling has had, a parents group Get Cresskill Kids Back to School is calling on Gov. Phil Murphy, State Sen. Loretta Weinberg (D-Bergen) and Assemblyman Gordon Johnson (D-37) to cut bureaucratic runaround.

Last month, the group had a turnout of more than 100 people at a rally in Trenton to raise awareness for Cresskill’s situation.

“We have 1,000 children (6th to 12th graders) who haven’t been in full day in-person learning for over 640 days. This is unacceptable and unbelievable. We, as a community, are doing everything we can to rebuild our school, but we keep running into roadblocks,” the group said in a statement. “We need NJ state emergency funds and a push for 100% FEMA funding.”

Parents are calling on Murphy to sign waivers to let the district place orders for the many parts and supplies needed for repairs, avoiding any potential backorders and allowing work to commence even sooner.

In response, the Murphy administration has said there is no legal avenue for the governor’s office nor any other state agency to issue such a waive that would allow Cresskill to exceed its budget cap without bonding or a referendum.

During a press conference last month, Murphy told reporters the state is working to help some of the schools damaged last fall by Ida.

“Cresskill is the one that is the most talked about,” he said. “It’s probably one of the largest-scale challenges and we’re trying to find creative solutions. FEMA will pay, but unfortunately they come in on the backend and repay you.”

Despite being located in a flood zone, Ida was the first instance of major flooding at the 60-year-old school.

Concerned that severe flooding will become the norm, local and state officials are calling for federal support to study how to protect Cresskill from future events.

Earlier this week, U.S. Rep Bill Pascrell, Jr. (D-9) asked the Army Corps of Engineers (USACE) to support a request by Cresskill and the New Jersey Department of Environmental Protection to conduct a flood prevention study in the borough.

Pascrell said, “I strongly encourage the USACE to provide any assistance possible to design a technically feasible, economically justified, and environmentally acceptable project to improve the resiliency of Cresskill against future storms.”