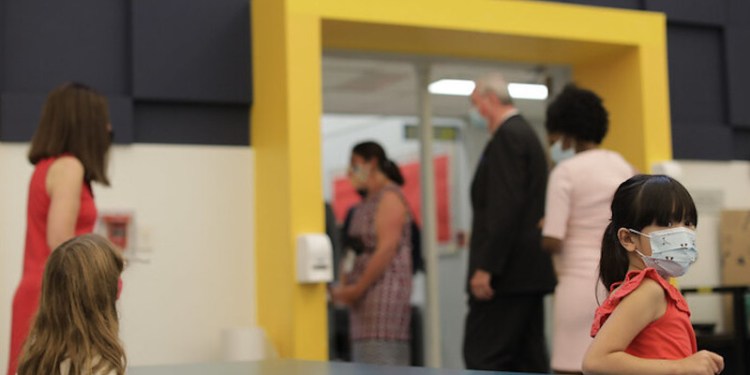 Gov. Phil Murphy was emphatic that face masks will stay for students despite push back from Trenton lawmakers.

“Unequivocally, the mask mandates in school and daycare centers will continue for the foreseeable future,” said Murphy at a press briefing Jan. 10. “They are the only responsible course of action at this time. I will not let that happen.”

At issue is the legislation that would reduce the health emergency powers that Murphy requested by 90 days but that the State Senate and Assembly are not willing to do.

The governor revealed that before the recent surge, he would have had a different answer in regards to masks mandates for school staffers and students.

“If you had asked me six week ago if I had some hope on Jan. 11 at midnight we might have been able to shift to a different reality…yeah, I did have that hope,” he stated. “(But) we can not change gears on this in the middle of this tsunami…we will not get their in the near term”

In the State Senate, a bill was passed granting the governor the authority to address the emergency medical and healthcare needs of the COVID crisis. This resolution authorize a 45-day extension of administrative orders, executive directives and guidance to address crisis conditions at New Jersey hospitals and other healthcare facilities.

“The extended waivers and authorizations will grant the administration and the healthcare community the ability to counter the more acute and persistent problems that plague the healthcare system,” said Senate Majority Leader Steve Sweeny (D-3). “The staffing shortages are systemic, threatening to put a chokehold on hospitals, long-term care centers, paramedic services and even doctors’ offices. The resolution will enable frontline medical services to manage the crisis by helping to resolve the severe staffing shortages and provide them with the regulatory flexibility to ensure patients are treated safely and effectively.”

GOP leaders, led by outgoing Senate Minority Leader Tom Kean, Jr., have been steadfast in their opposition to extending any of the governor’s health emergency powers.

“ Although the bill has reduced the 90-day extension to a 45-day extension, every extra day the Governor’s emergency powers are in place is one day too long for New Jersey,” stated Kean. “I voted against extending the Governor’s powers on June 3, 2021 and I will vote against S-4313.”

Notably left out of the bill was Murphy’s request to extend the authority to install federal health guidelines, such as masks in schools, and overseeing vaccinations and testing. When he asked for the extension, Murphy said the in-school mask mandate was needed due to the large numbers of students in younger age groups being unvaccinated.

Unsurprisingly, Murphy has the backing of New Jersey’s largest teachers union whose leaders said they were “appalled at the idea that any member of the New Jersey Legislature would fail to support.”

The New Jersey Education Association said in their letter to lawmakers that “at a time when cases are surging and schools across New Jersey are struggling to remain open for in-person instruction, it is beyond irresponsible to let that vital safety measure lapse when it is supported by health, science, and common sense.”

But Murphy, while not providing any details, said his office was “working with legislative leadership so that we have a good path forward, particularly given the overwhelming tsunami (of new COVID-19 cases) we are dealing with.”

As for those that have passed, the state reported 29 confirmed deaths, bringing that total to 26,625. The state listed probable deaths at 2,869, bringing the overall total to 29,494. State officials noted 59 deaths occurred in the last 24 hours of reporting that have not yet been lab confirmed.

Health officials noted 522 long-term care facilities are currently reporting at least one case of COVID-19, accounting for a total of 16,478 of the cases, broken down between 6,769 residents and 9,709 staff.

The state’s official death total will now be reported as those that are lab confirmed, sits at 8,799 on Jan. 10. The facilities are reporting to the state 8,145 residents deaths and 171 staff deaths.

In regards to outbreaks related to in-school transmissions as of Jan. 4, the state has tracked 384 school outbreaks and 2,227 cases linked to those outbreaks since the 2021/2022 school year starting Aug. 7, up 11 outbreaks and 338 cases from the week previous.