Incumbent announces he will run for less-friendly congressional district seat 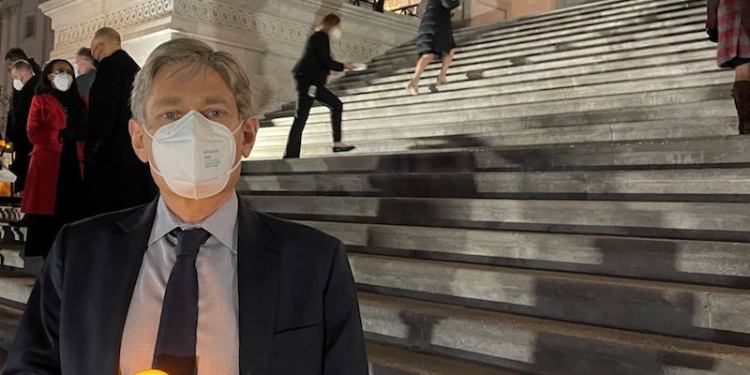 Ending speculation that he would not run for re-election, Rep. Tom Malinowski announced he will seek to defend the Congressional seat he currently occupies this Fall.

An email titled “Malinowski Announces Plans for 2022 Election Cycle” hit inboxes across the state Jan. 10 at 10:15 a.m., with the message simply quoting Shakespeare’s Henry V: “Once more unto the breach, dear friends…'”

The race for New Jersey’s 7th Congressional District is being eyed nationally due to a potential rematch from the 2020 race that was separated by one percentage point, the GOP’s desire to gain control of the House and a map that is less friendly to Malinowski than it was two years ago.

The confirmation that he will run follows a tweet sent out by Malinowski Dec. 23, 2021, after the new congressional maps were approved that set off speculation the Somerset County lawmaker may not run for a third term in an election national Republicans have eyed as a chance to flip the House of Representatives.

“The NJ redistricting gods haven’t made it easy for us!,” was the message sent out by Malinowski’s campaign Twitter account. “I’m also incredibly moved by the messages of support we’re getting from so many folks in my current and new district. We will make our judgments with the people who got me here in mind and in the loop.”

The redrawing of lines made Malinowski more vulnerable in an expected rematch in 2022 with State Sen. Tom Kean, Jr. that saw the incumbent win by a 50.6%-49.4% margin two years ago. While the new map was viewed as strengthening the 5th District for Rep. Josh Gottheimer and the 11th for Rep. Mikie Sherrill, it was at the cost of the 7th District being weakened by state Democrat version approved by the New Jersey Congressional Redistricting Commission.

Using the most recent Presidential election as a guide, what was a 10 point district win for President Joe Biden, the 7th is now just a four point one after losing towns Malinowski carried solidly in 2020—Millburn, Dover, Union Township, Cranford and Montgomery—versus GOP-leaning Warren County and nine municipalities in Sussex County.

Kean is expected to see the GOP’s nomination. But another candidate with considerable name recognition has recently emerged in the Republican primary: Assemblyman Erik Peterson (R-23). Peterson’s profile statewide was recently raised as one of the Assembly members who defied COVID-19 health and safety protocols to enter the floor of the chamber he serves late last year.

The filing deadline for the race is April 4 with the primary set for June 7. But the decision to or not to run is usually decided much earlier so that the party can screen candidates as well as allow those choosing to run to get a campaign up and running.

In an interview with North-JerseyNews.com earlier this month when questioned about his reelection chances, Malinowski said he planned to drive home a message that between the Bipartisan Infrastructure Bill and the Build Back Better Act, Democrats are delivering on their promises to make the lives better for every single middle class resident of Northern New Jersey.

“We moved this country from insurrection to infrastructure in less than a year and that’s a good record to run on,” the Congressman said at that time. “The message from voters that I am hearing is that it’s great we kept all of our promises from 2018 and 2020 but it is not enough. My hope is that voters will trust the people who kept their promises to keep the next set of promises.

Besides a tougher map, Malinowski realized the issue of stock trades that he had made in office would be the centerpiece of any campaign. A report from the Office of Congressional Ethics on Oct. 21, 2021 confirmed Malinowski “knowingly failed” to enter reportable Periodic Transaction Reports (PTR) transactions into the online reporting system in accordance with STOCK Act deadlines.

But it was an issue he was ready to take head on and look to put the spotlight on Kean as well.

“I am actually going to take questions from voters unlike my opponent (and) I will say that I screwed up in filing some of my reports late, I owned up to it, and paid a late fee,” said the Democrat who formerly served in the Obama Administration. “I also went way above and beyond what the law requires by setting up a completely blind trust for savings that I have invested.”

Even in his tweet that raised questions about his future, Malinowski took aim at Kean as he stated “I’ve only ever won hard races, and my likely opponent has only ever lost them—for good reason….I’m at my best with nothing to lose,” he tweeted. “Meanwhile, I will continue to fight to defend our democracy & deliver for New Jersey the infrastructure, tax relief, and progress DC Republicans oppose.”