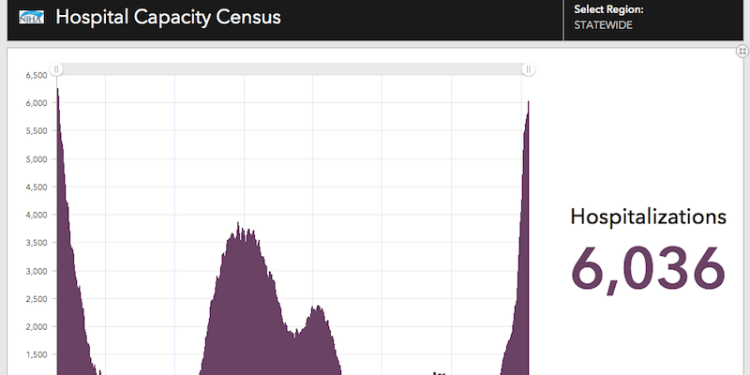 State health officials laid out a timeline for the current COVID-19 surge that expects key health metrics not plateauing until late February.

New Jersey Department of Health Commissioner Judy Persichilli said based on the current data and trends, state officials believe hospitalizations will climb to about 8,000 most likely by the end of the 3rd week in January and going into the first weeks of February.

“The peak actually could occur sometime in the first two weeks of February before there’s a downturn. We do believe we are going to have high levels for a couple of weeks,” said Persichilli at a press briefing Jan. 10.

For a trend line of other data, Persichilli detailed that the number of new cases will peak first, expected to be followed with a high in hospitalizations a week or two after that and then finally the apex in deaths two week after.

Members of the Murphy Administration have continually cited transmission rate, hospitalizations, intensive care units, ventilators and positivity rate as health data they rely on to track how the coronavirus is being contained in New Jersey, guiding them in determining when restrictions have to be tightened or lifted.

The backdrop of what the next six weeks will look like comes as Gov. Phil Murphy and State Senate and Assembly leaders were locked in battle to extend the governor’s pandemic-related emergency powers set to expire Jan. 12. State legislative leaders in both houses pulled back a bill that would have narrowly extended the powers for 45 days—half of what Murphy asked for—after the governor stated face mask mandates in school would stay that were not included in the bill.

While the politics of the pandemic plays out, health officials pointed to signs that some key metrics were trending in the right direction and were hopeful that would continue.

“The rate of transmission has started to inch down. God willing that is the beginning of something but I don’t know that we know enough to be able to say that,” said Persichilli. “Omicron is a funny variant that shoots way up then, like in South Africa came down just as quickly—we can only hope that occurs.”

State epidemiologist Christina Tan commented that the peak is expected to come earlier in the New Jersey region than in other parts of the country. Murphy and health officials expressed hope that the U.S. would follow the same timeline as what happened in South Africa, where cases peaked in mid-December, after the variant was identified in late November.

Murphy noted the current number of hospitalizations in New Jersey is nearly four times the number one month ago, when 1,531 COVID patients were being treated in Garden State hospitals, while ICU and the number of patients on ventilators has almost doubled since Christmas.

As for those that have passed, the state reported 142 confirmed deaths, bringing that total to 26,765. The state listed probable deaths at 2,869, bringing the overall total to 29,634. State officials noted 71 deaths occurred in the last 24 hours of reporting that have not yet been lab confirmed.

The state’s dashboard had a count of 6,036 patients hospitalized as all 71 hospitals in the Garden State filed reports Jan. 11. By region, there were 2,685 in the North, 1,917 in the Central and 1,434 in the South. Of those hospitalized, 892 are in intensive care units and 500 on ventilators—reaching that number for the first time since Dec. 27, 2020. A total of 548 patients were discharged in the last 24 hour reporting period.

Health officials noted 527 long-term care facilities are currently reporting at least one case of COVID-19, accounting for a total of 17,182 of the cases, broken down between 7,054 residents and 10,128 staff.

The state’s official death total will now be reported as those that are lab confirmed, sits at 8,826 on Jan. 11. The facilities are reporting to the state 8,158 residents deaths and 165 staff deaths.

In regards to outbreaks related to in-school transmissions as of Jan. 11, the state has tracked 388 school outbreaks and 2,255 cases linked to those outbreaks since the 2021/2022 school year starting Aug. 7, up four outbreaks and 28 cases from the week previous.