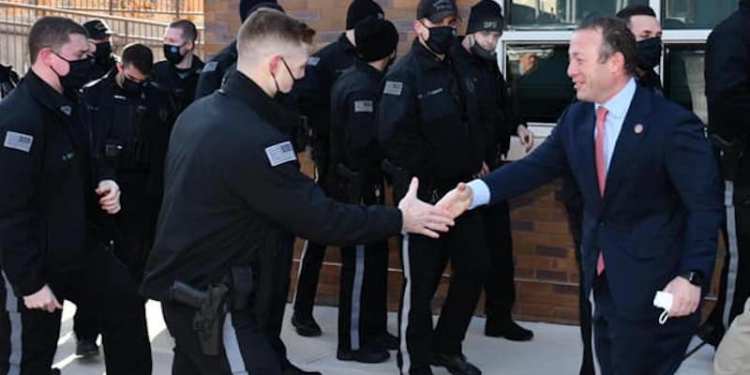 “Cutting to the bone only weakens any profession; it pushes good people out, it diminishes the overall quality, and fuels a race to the bottom. That’s especially true in law enforcement,” said Gottheimer. “(The bill) sends an important message: we want our police officers to feel supported, especially when they are struggling with the realities of their profession. We want them to know that we have their backs and that they are appreciated for the job they do.”

The proposed law, targeting investments that would bolster access to resources and training for police officers in North Jersey and nationwide, has the backing from police organization such as the Fraternal Order of Police, the National Troopers Coalition, and the New Jersey State Troopers Fraternal Association.

Four Provisions in the Bill

The bill focus on four main areas of investment, starting with officer safety, de-escalation, and domestic violence response training. Funding would allow for education on these topics while offsetting overtime pay needed for the training.

Federal monies would be allocated for body worn cameras as well as subsidizing data storage and security efforts for the technology.

Additionally, grant money would be provided for small departments to recruit new officers, and provide funding for retention bonuses to help departments from losing too many members. Finally, the bill would provide resources for officers’ mental health.

“The only way to make a department better is to invest wisely, in training and tools, in recruiting and retaining the best talent, and ensuring they can be involved in the community. That’s how you keep families safe. In short, when it comes to law enforcement, you need to invest to protect,” said the Congressman.

Gottheimer, who is sponsoring the bill with former sheriff Rep. John Rutherford (R-FL), cited comments of New York City’s Mayor and former Police Captain Eric Adams, who recently stated that “I don’t subscribe to the belief of some that we can only have justice and not public safety. We will have them both” in explaining the need for the legislation.

“Adams is exactly right — we can and we will have both…(to) help ensure a safer, more just community,” said Gottheimer. “This legislation will provide critical financial support for recruitment, training, and mental health.”

The bill was praised by local, state and national police organizations and politicians.

“Congressman Gottheimer is in the forefront of ensuring the law enforcement community has the necessary funding to provide access to the newest technology, educational and training opportunities,” said Bergen County Sheriff Anthony Cureton. “Law enforcement is constantly evolving and the legislation for funding, outlined in the Congressman’s bill, is essential to better policing.”

Dumont Mayor Andrew LaBruno, a vice president of the Jersey City Police Superior Officers Association, added “investing in law enforcement is crucial to public safety” and that the bill “will assist municipalities with funding for police officer recruitment, retention, education, training, and equipment.”

Patrick Yoes, National President of the Fraternal Order of Police, offered that the programs to be funded in the bill would help law enforcement officers that have faced many challenges and threats to their well-being that has created a dangerous environment for police.

“These challenges have ranged from violence against officers, an increase of violent rhetoric against them, lagging technology, recruitment and retention issues, and mental health concerns—particularly, smaller municipalities have seen an increased strain on the men and women in blue as they attempt to uphold the rule of law,” said Yoes. “The Invest in Law Enforcement Act would be a step in the right direction to combat these issues that plague law enforcement officers in smaller municipalities.”