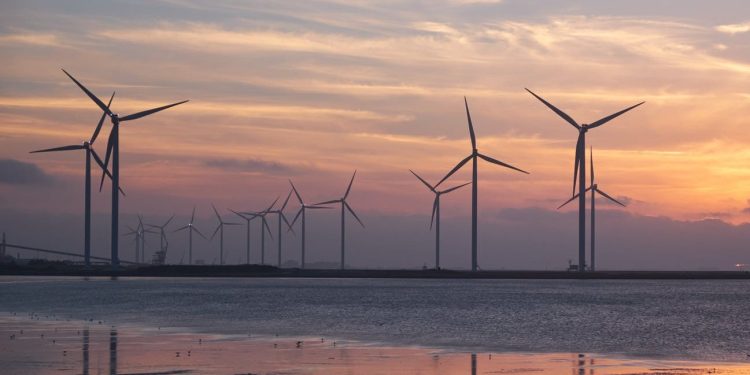 Gov. Phil Murphy announced that the Bureau of Ocean Energy Management (BOEM) will hold a wind energy auction in February for more than 480,000 acres offshore New York and New Jersey.

The Feb. 23 auction, the first under the Biden Administration, will be for land in what is known as the New York Bight. The area extends northeasterly from Cape May Inlet in New Jersey to Montauk Point on the eastern tip of Long Island.

Murphy was joined by his counterpart New York Gov. Kathy Hochul, Secretary of the Interior Deb Haaland, and Liz Shuler, President of the American Federation of Labor and Congress of Industrial Organizations in announcing the grant.

“Offshore wind holds the tremendous promise for our future in terms of climate change, economic growth, strengthening our workforce, and job creation,” said Murphy. “New Jersey is already committed to creating nearly one-quarter of the nation’s offshore wind-generation market and these transformative projects are proof that climate action can drive investments in infrastructure and manufacturing, while creating good-paying, union jobs.”

“This historic announcement is a huge step forward in tackling the climate crisis for future generations and creating good paying union jobs in New Jersey and across the nation. New Jerseyans welcome the Biden Administration’s announcement to build on our investments for a clean energy future,” Pascrell said.

Rep. Mikie Sherrill signaled her support for the New York Bight project as well, saying it furthered the steps already taken by the state to embrace clean energy.

“New Jersey is perfectly poised to be a nationwide—and global—leader in the renewable offshore wind space. Today’s announcement that the Administration is beginning the auction process for the rights to establish offshore wind farms in areas in the New York bight, off New Jersey’s coast is another crucial step in meeting that potential,” said the Congresswoman.

The leases offered under the BOEM sale would result in 5.6 to 7 gigawatts of offshore energy, which could provide enough electricity to power 2 million homes.

Leaders outlined a shared vision for the energy supply chain, noting it would help underserved communities and that the collaboration could serve for future engagement.

“The Biden-Harris administration has made tackling the climate crisis a centerpiece of our agenda, and offshore wind opportunities like the New York Bight present a once-in-a-generation opportunity to fight climate change and create good-paying, union jobs in the United States,” said Haaland. “We are at an inflection point for domestic offshore wind energy development. We must seize this moment—and we must do it together.”