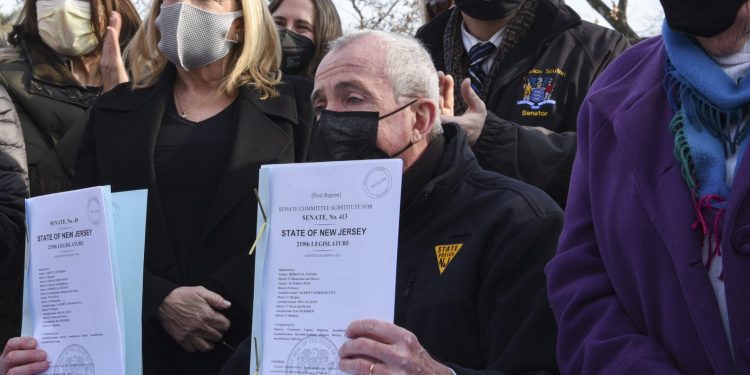 Amid Roe v. Wade’s uncertain future in the U.S. Supreme Court, New Jersey has moved to protect the right to reproductive choice.

While terminating a pregnancy is legal under state court rulings, it was never written into law in New Jersey, but the push to codify the right began after the nation’s highest court took up a Mississippi case last year aiming to ban abortions after 15 weeks.

During a signing ceremony Jan. 13 in Teaneck, Gov. Phil Murphy enacted two pieces of legislation that he said will not only “tangibly increase access to reproductive rights,” but also “ensure that New Jersey residents are now and will remain in control of their reproductive choices. Regardless of whether or not the Supreme Court overturns Roe v. Wade, New Jersey’s position of supporting the right to reproductive autonomy will remain clear and unchanged.”

NJ Among Handful Of States With Statutory Protections

“Women across the United States are being threatened as reproductive rights are in serious jeopardy,” said former Assemblywoman Valerie Vainieri Huttle at the signing ceremony. “Twenty six states are prepared to restrict access to reproductive care. The future of choice remains uncertain nationwide.”

New Jersey is one of 15 states, along with the District of Columbia, with statutory protections for abortion.

Unlike the previous version of the bill introduced in 2020, the Reproductive Freedom Act, the legislation approved Jan. 10 by the Legislature would not require insurance providers to cover abortion. The Reproductive Freedom Act — which also would have covered care for undocumented women through the state Medicaid program — stalled in the Legislature and lost more support when Republicans flipped seven Democratic legislative seats last year.

However, the new law will permit the state Department of Banking and Insurance to study whether the cost of abortion is an impediment to uninsured and low-income women, a step toward requiring insurance companies to cover the procedure.

Murphy noted “we would not be here today” with the work of two departying state lawmakers from the 37th Legislative District—Recently retired state Sen. Loretta Weinberg  and  Vainieri Huttle.

Weinberg (D-37), the bill’s lead sponsor and longtime abortion rights advocate, said it was “critical” for New Jersey to enact laws that “clearly and unequivocally” protects a woman’s right to choose.

“Personally, this is a culmination of a very long journey,” said Weinberg. “The bill says ‘the legislature is committed to ensuring that their are no barriers to reproductive freedoms exist in the state. Individuals have the right to make their own decisions concerning reproduction, including the right to contraception, the right to terminate the pregnancy and the right to carry a pregnancy to term without government interference or fear of prosecution.’ In a few moments, that paragraph will be law in the state of New Jersey.”

Women Will Have ‘More Control Over Their Lives’

Under the second bill signed Thursday, S-413/A-4698, private insurance companies and Medicaid would be required to expand contraceptive coverage from a 6-month supply to a 12-month supply.

Vainieri Huttle (D-37), who called up Assemblywoman Mila Jasey (D-27) and Assemblyman Raj Mukherji (D-33) at the ceremony, praised them for their work in the progressive caucus and recalled the fight of over 15 years over a woman’s right to healthcare.

“The need today for this bill signing is more urgent than ever,” said  Vainieri Huttle. “It will protect residents of our state in the impringments of their reproductive right regardless of what happens at the federal level.

“Ensuring coverage of these prescriptions for up to 12 months will allow more New Jerseyans to prepare ahead. Making it easier and more likely for women to access birth control is a crucial component of the family planning services our state is taking steps to protect,” the lawmakers said in a joint statement.

The state Senate voted 23 to 15 to pass the Freedom of Reproductive Choice Act, while the state Assembly passed the bill 46 to 22 with eight legislators abstaining.

Republicans in both chambers spoke out against the bill, some against abortion broadly and other questioning its swift passage through the Legislature.

Murphy: This Issue ‘Has Not Been Easy’

The signing was also met with opposition from New Jersey’s Catholic Bishops, which released a joint statement expressing “profound disappointment and deep concern.”

“We have failed as a society when a response to any pregnancy is fear rather than joy,” they said. “Sadly, too often this fear is born out of the mother’s uncertainty she will not be able to provide for herself and her child the resources necessary to live a flourishing life. We must do better.”

In his remarks, Murphy described himself a devout Catholic and said his own “journey and evolution of this issue has not been easy,” adding he has “trust for others, especially for those with limited means for whom restrictions on access to reproductive health care has the most devastating effect.”

The move comes about a month after New Jersey enacted new rules that prohibit medically unnecessary regulations on abortion, as well as opened up new avenues for care.