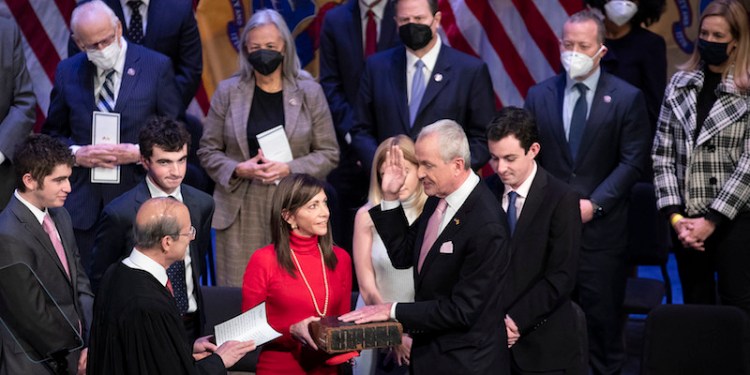 Gov. Phil Murphy was sworn in as governor of New Jersey for a second term on Jan. 18, the first Democratic governor to do so in 44 years.

In his 30 minute address after taking the oath on First Lady Tammy Murphy’s more that 100 year old family bible, Murphy’s speech was a combination of what he will focus on in a second term as well as a wider view of the nation’s politics and the fight to keep the American Dream alive.

“Our original mission is not yet done. Our objectives remain constant. We’re on year five of our eight-year journey together,” he said. “A new term is not about moving to the next shiny object for the sake of it. And it clearly is not about saying one thing to one group and something different to another. Our task is about steady hard work toward a vision that brings us all together and brings us all along.”

Murphy started his speech by noting an inauguration is a day of reaffirming oaths, rededicating those elected to service, and renewing priorities as well as a moment for reflection and remembrance.

The governor called to a field of 3,000 flags representing the New Jerseyans lost since the start of the coronavirus pandemic outside the War Memorial in Trenton where the inauguration ceremony was held.

“As we continue to work to disperse the dark clouds of COVID that hang over our state, we honor the tremendous sacrifices so many have made in their daily lives to help us return to normal,” he said “But we honor, especially, those who will not be with us to see the blue skies we know await us.”

The governor said he first sought the office with a clear purpose, to grow and strengthen New Jersey’s middle class, to make the state stronger and fairer and to build an economy that works for every family.

Work of All Residents

Murphy renewed his pledge to be the governor for all of New Jersey, including for those who did not vote for him.

“After all, we are all New Jerseyans. As diverse as we are, we share common challenges, common cause, and a common bond,” he said. “Together, we have been through so much. And together we will seek a brighter tomorrow.”

The former Ambassador to Germany noted that the end of one term does not mean that the obstacles of the previous four years cease to exist.

“We know that many challenges remain—and that many more will surely come,” he said. “For far too many across our state, and indeed our nation, the fraught state of our politics has brought with it an added fear that the American Dream is dying. So, our job is to make living, working, and raising a family in New Jersey secure again for every one of the 9.3 million members of our extended family.”

Murphy reminded Republicans and Democrats lawmakers that it is their job together to ensure a recovery from COVID includes every New Jerseyan.

“These goals are inextricably linked.”

The one-time Goldman Sach employee offered that the state has transitioned from the Garden State over the past 245 years to being known as a location where “the seeds of innovation planted here grew into technologies that, quite literally, built the modern world.”

Fighting for the American Dream

The Democratic governor reflected on his own family’s journey that included an abiding faith, a love of country, and a strong set of values that enabled them to achieve the American Dream.

“That dream is supposed to be the promise of America. Yet today, the American Dream that worked for a family like mine feels out of reach for too many,” he opined. “No family deserves that.”

The pursuit of the American Dream for everyone is why Murphy said he decided to engage in public service and, specifically, to run for Governor.

“I want this generation, and the generations that follow, to have the same shot to build a better life that I had,” he said. “I ran for governor to rebuild this path to opportunity and prosperity for everyone in New Jersey. This is my core motivation, what drives me every single day. This is my North Star.”

The governor stated his goal for these next four years is about “moving people forward without leaving people behind… voices raised together with a backbeat you cannot miss…taking away obstacles and adding seats around the table of possibility and prosperity…most of all, it is about filling the air we breathe with real opportunity and full equality.”

In echoing his State of the State address a week earlier, Murphy said he and more politicians need to listen more to the people they serve.

“No matter where they live, no matter whether their family has been here for generations or just came across a river or an ocean to make New Jersey their home, I hear common themes and common dreams,” he said. “They want a New Jersey with more opportunity for a good job and an even better career. They want a New Jersey that gives them the opportunity of a fair shot at reaching their potential—and which calls on everyone to live up to their responsibility to do their fair share to make New Jersey work for all of us.”

“So a stronger and fairer New Jersey that makes sure everyone gets a fair shot and everyone does their fair share isn’t just my agenda, it’s theirs, too. And they want a New Jersey that listens to them.”

Murphy went on to list an issue that was central to the campaign of GOP challenger Jack Ciattarelli last Fall: making New Jersey more affordable. He said his second term would focus on three of the biggest expenses facing families in the Garden State— healthcare, higher education, and property taxes.

“We’re going to keep chopping away at property taxes,” said Murphy. “Though property taxes are not set by the state—by either me or the Legislature—the decisions and investments we make directly impact their trajectory. Every dollar of new state funding for our schools and communities, for local roads and libraries, and for countless other areas, is a dollar that stays in your pocket as a property taxpayer.”

“ Using this mindset, each of our administration’s first four years have ranked among four of the lowest year-over-year increases in property taxes on record. But I’m not going to be satisfied with just slowing property tax growth. I want to get us to a place where we can begin to see them go down.”

The governor pledged that his administration would keep working toward fully funding public schools, growing pre-K with a goal of ensuring universal preschool for every young learner in every community and continue growing the innovation economy that will make New Jersey model for the nation, including those focused on clean energy, life sciences, medicine, television and film production, cannabis and the online gaming and sports betting industries among others.

“Importantly, the small businesses that turn Main Street from just a strip of pavement into the center of a thriving community—the Mom & Pop, the neighborhood restaurant, the corner bar, the childcare center, the art gallery, the theater, the independent retailer,” he said. “Over the past four years, I have attended many groundbreakings for all of the above. In the next four, I look forward to many more ribbon-cuttings.”

Murphy promised that his administration would not stray from the path of fiscal responsibility established during his first term.

“The people of New Jersey want us to treat their tax dollars, whether they go to support their schools or improve their roads, as if they were our own. And we are,” he said. “The path that asks those at the top to pay their fair share so we can do more for more of our people and our communities… has the bond rating agencies once again optimistic about our future….has us meeting our full pension obligation… has seen us partner with our public workers to save them, and you, billions of dollars while preserving the quality of health care… delivering a more innovative and smaller state government than four years ago…that has delivered 14 tax cuts, and hundreds of millions of dollars in direct tax relief, for our middle-class and working families and seniors.”

“We are turning New Jersey around, just as we said we would four years ago.”

The Progressive Democrat focused on social issues that he will be pursuing over the next four years, including more gun safety bills, ensuring voting rights are expanded and protected and putting forward three nominees who will uphold the respected legacy of fairness and independence of the State Supreme Court.

After thanking Lt. Gov. Sheila Oliver, members of his administration and his family, Murphy said the guidance of the First Lady’s family bible is as still apply as it was when it was first given as a marriage gift.

“The values it instills in all of us are as strong as ever—service, sacrifice, family, and humility. These are the values that run deep in New Jersey,” said Murphy. “They are the values we need to reach for once again to show our nation the path forward.”

In the concluding portion of his address, Murphy turned toward a national political discourse he sees as being in shambles and why some fear the American Dream is dying and out of reach.

Murphy then took aim at the actions and the inaction of Washington.

“And while some in Washington just want to fight with each other, in New Jersey—where we are no strangers to arguing—we still fight for each other.”

To drive home his point, Murphy cited a speech by then Illinois Gov. Adlai Stevenson 70 years earlier during the height of McCarthyism in which Stevenson argued the a nation needed “a patriotism that puts country ahead of self; a patriotism which is not short, frenzied outbursts of emotion, but the tranquil and steady dedication of a lifetime.”

“Let’s make New Jersey the proof that the ongoing American Experiment is not about to come to an end,” he added. “After all, to be an American is a privilege—to be a New Jerseyan is an honor.”

“Now, in January 2022, let us make New Jersey the place where the direction of our nation is righted, where the spirit of our nation is restored, and where our common destiny as Americans —regardless of our political party or persuasion—is reaffirmed,” he said.

Murphy said his next term is filled with possibility and promise that he believes can be built on the progress of the past four.

“Now, in the quiet cold of Winter with a new Spring on the horizon, it is time to look… and to move forward,” he said. “We will move forward in the only way we know how, and in the only fashion our state has ever done—together. That is why I am committed to making sure everyone across our great state has their fair shot and each of us does our fair share.”

Murphy finished that “the American Dream with New Jersey flavor and attitude—and Jersey values. And that is how we make New Jersey the Opportunity State.”