Republicans push for action from Governor to cut taxes, spending 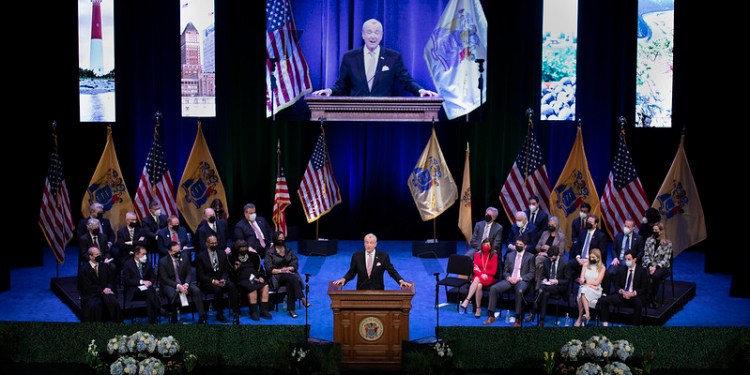 Gov. Phil Murphy won’t get much of a post-inauguration honeymoon during these first few days of his second term in the governor’s mansion.

Republicans in the State House are urging Murphy to get back to work and they are giving New Jersey’s second-term governor a laundry list of issues they want him to address.

Foremost among those issues is taxes.

State Sen. Kristin Corrado (R-40) called Murphy to task days before his Jan. 18 inauguration, describing it as “strange” that he is bragging that New Jersey’s highest-in-the-nation property taxes continue to rise.

“Families living in average homes, with three bedrooms and a couple baths are paying almost $800 in property taxes every month — or more than $9,200 this year. Boasting about that is delusional,” she said in a press statement.

She seemed to be referring to Murphy’s repeated statements pointing to his success in limiting increases in property taxes during his first term in office.

The governor, who just won a tougher than expected race against GOP challenger Jack Ciattarelli, made a similar comment in his speech after taking the oath of office.

Murphy said his second term would focus on three of the biggest expenses facing families in the Garden State— healthcare, higher education, and property taxes.

“Each of our administration’s first four years have ranked among four of the lowest year-over-year increases in property taxes on record,” Murphy said. “But I’m not going to be satisfied with just slowing property tax growth. I want to get us to a place where we can begin to see them go down.”

Corrado said New Jersey residents are desperate for relief from high property taxes. She urged Murphy and the state legislature to address what she described as a convoluted school funding formula and the role it plays in pushing property taxes upward.

“It is no secret. School funding is the primary driver of property taxes in New Jersey,” she said in a press statement. “The increases in school funding the Governor crows about were in some select districts while more than 200 school districts had their state aid cut even as the state jacked up every tax it could find.”

“Until Trenton fixes the broken funding formula, property taxes will continue to escalate, and New Jersey will remain unaffordable.”

Oroho: ‘We Shouldn’t Waste Any Time’

Changing the school funding formula is one of several areas where the State Senate’s top Republican said he thinks Gov. Murphy along with  Democrat and Republican lawmakers can find common ground.

On the heels of Murphy’s swearing in and the reorganizing of the legislature days earlier, State Senate Republican Leader Steve Oroho (R-24) said it’s time to get back to work.

“Now that the housekeeping is complete, we shouldn’t waste any time getting back to work in Trenton on efforts to make New Jersey more affordable,” said Oroho. “After the November election, the governor and legislative leaders of both parties said addressing affordability would be a priority. After all that talk, it’s time to show people some real action. Senate Republicans are ready to work.”

Oroho said the school funding formula needs to be modified “to make the distribution of billions of state aid more equitable.”

Oroho listed other areas where he saw opportunities for bipartisan agreement to provide tax relief to New Jerseyans. Among them were:

“We have solutions on the table that could help turn the tide on property taxes and income taxes, which consistently top the list of concerns of New Jerseyans,” Oroho said. “If the governor and legislative leadership want to work in a bipartisan fashion, we have a real opportunity to lower the cost of living in the Garden State.”

No Break From GOP Critics

While State Sen. Oroho’s Jan. 18 statement pointed to potential for Republicans to find bipartisan agreement with Murphy, separate, same-day statements from two other GOP senators showed that Inauguration Day would offer the governor no honeymoon from Republican criticism.

“Starting during his reelection campaign and for the past several months, the Governor has insisted he is done with tax increases. It’s a laughable promise he repeated just days ago in his State of the State address,” said Testa.

Testa then pointed to taxes that recently increased or are set to increase, including a 20% increase in the tax on employers based on their payroll, collected Oct. 30, 2021; the employee payroll tax, which increased by 10% on Jan. 1; and toll increases that went into effect on Jan. 1.

“Is the Governor done with tax increases? Clearly, he is not,” Testa said. “Murphy is testing the old saying, ‘Tell a lie often enough and people will believe it.’”

Additionally, State Sen. Joe Pennacchio (R-26) blasted Murphy for vetoing legislation that he said would have helped businesses beset by a host of pandemic-related challenges and setbacks.

The bill at issue (A 4958/S 3740), which Murphy pocket-vetoed, would have provided a retroactive sales tax exemption to small businesses that winterized their operations during the pandemic. Pennacchio noted that the bill, which was backed by the New Jersey Business & Industry Association, passed both the Assembly and Senate by unanimous votes.

“The Main Street bill would have provided desperately needed help for small businesses that sustained massive cost increases to stay afloat during COVID 19 and the Governor’s restrictions. That measure died on Murphy’s desk, but one wasting millions on out-of-touch movie makers was signed,” Pennacchio said.

The second bill Pennacchio referenced (S 4094/A 6070) expands digital media production tax credits under a program that Gov. Murphy first signed into law in 2018 and expanded in 2020.

“Dishing out big bucks to the Hollywood elite may be sexy and applauded by the entertainment world, but it’s a slap in the face to the one-third of businesses that closed their doors during this pandemic. These are Murphy’s twisted priorities,” Pennacchio said.