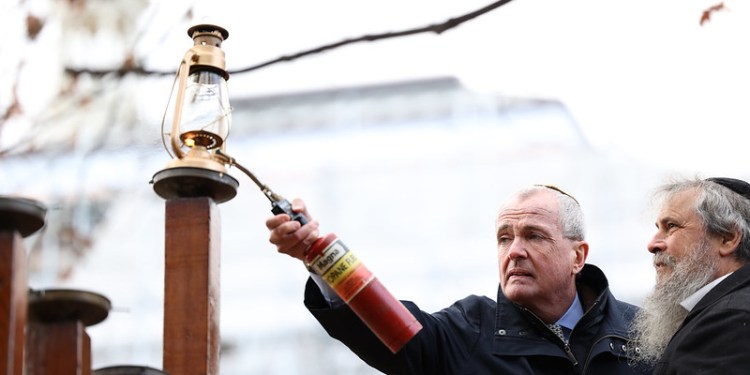 With the backdrop of the rise of antisemitic and hate crimes in the U.S., Gov. Phil Murphy signed legislation establishing the New Jersey Nonprofit Security Grant Program after a three-year pilot program managed by the New Jersey Office of Homeland Security and Preparedness (NJOHSP).

“In light of the evil antisemitic attack on the Colleyville synagogue this past Shabbat, making the nonprofit security grant program permanent is the first, minimum step forward in bringing more security resources to the Jewish community,” said Dov Ben-Shimon, CEO of Jewish Federation of Greater MetroWest, the largest Jewish organization in New Jersey.

“With hate crimes on the rise, we must do everything that we can to protect vulnerable communities from threats to safety,” said Murphy in a press statement signing the legislation Jan. 18. “This legislation provides funding that will allow nonprofits that are at high risk of being targeted to take measures to protect themselves. Our administration will always act as a partner to those who are targeted and under threat.”

Acting Director of the NJOHSP Laurie Doran said the legislation adds another resource to the department’s arsenal for mitigation efforts against acts of violence and terrorism.

“Similar to the federal homeland security program, eligible nonprofit organizations throughout New Jersey will have an opportunity to apply for a competitive state-funded grant program to enhance their physical security,” said Doran.

According to the latest FBI’s annual hate crime statistics report covering 2020, more than 10,000 people reported to law enforcement last year that they were the victim of a hate crime because of their race or ethnicity, sexual orientation, gender, religion or disability.

For those in the Jewish community, nearly one out of every four Jews in the U.S. has been the subject of antisemitism according to a report released late last year by the American Jewish Committee. Three percent of Jews who responded to the poll said they were the target of an antisemitic physical attack while 17% had been the subject of an antisemitic remark in person and 12% were targeted by remarks online.

Former Assemblywoman Valerie Vainieri Huttle, primary sponsor of this legislation in the prior legislative session, noted times have not gotten any better since the pilot program was introduced.

“We’ve all seen the news reports,” said Vaineri Huttle in a statement with Assembly sponsors Annette Quijano (D-20) and Robert Karabinchak (D-18). “Many religious based non-profits remain at risk and the need for security has heightened. Nonprofits, religious based organizations and members of these communities have a legitimate concern regarding their safety. Through the pilot program, we were able to see the need for funding. Now it’s time to make that support a permanent priority.”

A consortium of Jewish federations thought the state expressed support for lawmakers in passing the bill.

“We have worked tirelessly with our partners in the legislature and nonprofit community to ensure the safety and security of our state’s nonprofit and religious institutions,” said Jason Shames, CEO of Jewish Federation of Northern New Jersey. “Particularly in the light of recent antisemitic incidents locally and around the county, it is essential to continue this important work with our partners to protect all of our citizens from acts of violence and hate. Making the Nonprofit Security Grant Program permanent goes a long way towards this goal.”

Robin Wishnie, Executive Director of the Jewish Federation of Somerset, Hunterdon, and Warren Counties added. “This program makes it possible for New Jersey’s religious-based organizations to have access to vital funds to enhance security. For us as Jewish New Jerseyans, it is more pressing than ever before that we secure our facilities and protect our community from acts of antisemitism and violence.”

The new State Senate President said that no individual, group or organization should be left “vulnerable to any threats or acts of violence because of their race, religion or heritage.”

“Places of worship and other locations that bring people together will be better protected with the support this program provides. We won’t allow bias or hate to intimidate anyone from practicing their religion or honoring their ethnic pride,” said State Senate President Nick Scutari (D-22).