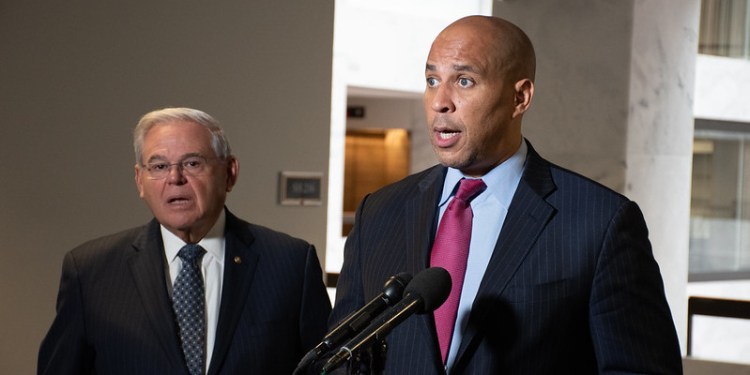 The inability to pass the changes was a major setback to President Joe Biden and Democratic party leaders on what is one of their top domestic policy priorities, causing some to question Republicans’ motives in blocking the bill.

“Sixteen Republicans who supported the reauthorization of the Voting Rights Act still serve in this body today. To them I say, ‘Join us.’  What has changed?” asked Menendez.

Booker argued there was clear evidence that areas with high concentration of Black and Brown voters were being targeted, saying residents of entirely black neighborhoods were 74% more likely to spend more than 30 minutes at polling places when compared to white neighborhoods.

“In the United States today, it is more difficult for the average African American to vote than the average white American….We know that black voters on average are forced to wait on line, twice as long as white voters,” Booker said Jan. 19 while arguing on the Senate floor. “Don’t lecture me about Jim Crow. I know this isn’t 1965. That’s what makes me feel outrage. It’s 2022, and they’re blatantly removing more polling places from the counties where Blacks and Latinos are overrepresented.”

“We must live in a nation where everyone is equal, not in rhetoric, or in slogan, or in salutes, but everyone is equal in the experience they have to [participate] in democracy. The vote is the bedrock of our nation; it is the foundation of the country,” he argued.

Sen. Menendez highlighted the late John Lewis as a sterling example for the sacrifices made for voting rights, and as a reason for keeping them enshrined among America’s principles.

“Our dear friend, someone who I had the privilege of serving with in the House of Representatives, the late John Lewis took a beating on a bridge in Selma for the right to vote. Surely, we in the Senate can muster a shred of his courage to protect that right,” said Sen. Menendez in his remarks.

Rep. Tom Malinowski issued a statement after the vote, indicating his disappointment that it had not been passed and that voter rights were under threat across the nation.

“Across the country, GOP legislatures are using narrow partisan majorities to pass laws that will make it harder for Americans to exercise their democratic franchise, while giving themselves the power to nullify any election that their side loses,” he said.

Malinowski argued the filibuster had outgrown its usefulness, and was not enshrined in the Constitution as many believed.

“The modern filibuster has evolved into something unrooted in Senate tradition and contrary to our Constitutional framers’ intent. Nowhere in the Constitution does it say that a mere 40% of Senators should be able to block consideration of ordinary legislation without lifting a finger,” he said.