For the good of the country, focus on pocketbook issues must dominate 2022 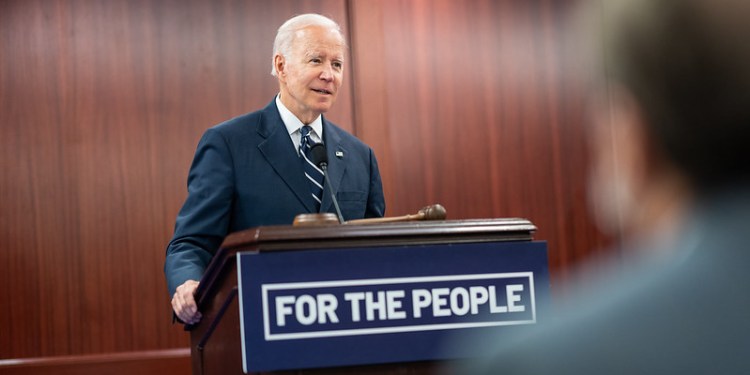 President Joe Biden stood for two hours this week in front of the press, putting forward a defense of his first year in office.

But straight talk with a concrete plan to reign in runaway inflation was hard to decipher. It is time to put an economic agenda first and foremost for the good of the country. Without a plan, it will be game over for Democrats this Fall.

The President was correct to highlight the significant legislation passed in its first year that are investments in our future, the crown jewel being the infrastructure bill, as well as the rollout of the vaccine program for those Americans who wanted it. And Dems have rightly pushed hard for generational reset on issues that will continue to make our country a leader in the educational and energy sectors.

This has been done during a pandemic that has alternatively shut or slowed down our lives, with the pressure overwhelmingly felt by students, their parents and teachers not to mention the healthcare professionals.

But as the latest wave begins to recede in the Northeast, the time has come for the President and members of his party to focus on an economy that has been unmoored and upended during the last two years.

The President talked in generalities about competition lowering prices, that the perception of empty store shelves is false and the supply chain bottlenecks lessening.

Inflation and supply chain issues are not going away; businesses are still experiencing high prices to get their goods shipped from overseas as well as continuing delays in getting goods from docks to warehouses to stores. Solutions and answers are needed to impact Americans now, not down the road.

This is a correctable problem that needs creative solutions, such as enlisting the National Guard where there are shortages of workers. The Biden Administration seems to not understand the problem or is afraid to discuss the hard realities the U.S. economy faces.

The approach of putting affordability on the back burner while being too focused on social issues nearly cost Gov. Phil Murphy a second term in a very Blue state. Democrats do not lack for ideas, such as the Affordability Agenda for Jersey that Rep. Josh Gottheimer proposed last year that showed how to combat inflation issues caused by supply chain issues along with domestic priorities, such as getting rid of the state and local tax (SALT) deduction cap, that can help taxpayers right away.

A course correction is needed at the White House and from Democrats, refocusing their agenda.  After all, Republicans do not plan to help for anything that will look like helping President Biden—as one of their own who decided not to run for Senate after talking to GOP leadership recently said they are more focused on being a “roadblock for two years.”

A major flaw of the Biden presidency has been his administration seemingly being a step behind when it comes to governing. If any lesson that the President needs to learn since taking office is that he needs to rid himself of the Senator mindset and be more forceful—with his opponents and even members of his own party.

The President’s North Star should be governing for the middle, those that placed him in the office in the first place. He can start by pushing for a smaller Build Back Better Act—and yes that includes reaching across the aisle to find common ground even if in the end it is a fool’s errand—that is married to an economic policy that tells the truth of where we are and how to get out of it.

He should be upfront of how we need to transform to living with COVID, for that will help our economy and continue to urge workers to return to their offices in some capacity.

We are understanding of wanting to have a positive message of a better day coming during a pandemic. But when business leaders warn that unemployment is on the verge of going up and prices for a bottle of Coke are rising as production is cut back, there has to be a strategy to address this. Talk of competition and the marketplace making the correction is a hope, not a plan.

We believe President Biden has a chance to change the political winds going against him and his party. The State of the Union must deliver a coherent message and concrete solutions to an economy—which includes how to pay down our debt—that feels like it’s at an inflection point. Tired of the fight over social issues from both extreme wings of the party, Americans want leadership on the issue that usually decides their vote: their bank account.

Even all the years later, it’s still the economy stupid.