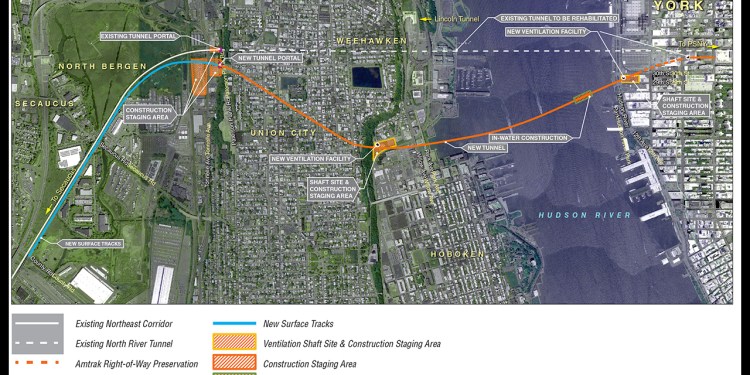 The long-delayed Gateway Tunnel project took a big step forward after the federal government raised its rating for the $12.3 billion plan to build two new rail tubes under the Hudson River.

On Jan. 20, the Federal Transit Administration (FTA) increased its rating for the Hudson Tunnel to “medium-high,” meaning that project is eligible to access federal funding through the Capital Investment Grants (CIG) program. Previously, the project was rated “medium low,” a ranking that prevented it from pursuing federal grants.

Federal funding could be as much as $5.6 billion, or 44% of the project’s costs to construct two new rail tunnels under the Hudson River and rehabilitate the existing 112-year-old tunnels. Amtrak has committed $1.4 billion, while New Jersey and New York will allocate up to $6 billion through low interest, long-term loans.

The FTA’s announcement is being praised by New Jersey officials who have long pushed for improvements to the aging Hudson River tunnel, especially after the crossing was severely damaged during Superstorm Sandy in 2012.

U.S. Sen. Bob Menendez (D-NJ) called the rating upgrade “a major step towards completing the nation’s most important transportation project,” while Rep. Tom Malinowski (D-7) cheered it as “a big win for New Jersey’s commuters” and a development that “gets us another step closer to a new tunnel under the Hudson River.”

The existing tunnel, which is used by NJ Transit and Amtrak, serves over 200,000 commuters daily and is a frequent chokepoint for trains in and out of New York City’s Penn Station.

Rep. Bill Pascrell, Jr. (NJ-9), said, “Our region’s commuters and travelers deserve to cross under the Hudson River with confidence, and know that they will get to their destination on time, and more importantly, back home to their families on time too. Adding state-of-the-art tunnel capacity to reduce delays and improve safety is exactly what they need. Finally and mercifully, we are closer than ever to our goal.”

“If we don’t fix the current train tunnel underneath the Hudson, it’ll literally be a Doomsday,” said Rep. Josh Gottheimer (D-5), who added, “With this long-deserved rating, we can finally take critical steps to advance the most important infrastructure project in our country, shorten commute times, and help grow our economy.”

The Hudson River tunnel project is a major component of the $30 billion Gateway Program, which was originally proposed a decade ago to improve service along one of the most heavily used passenger rail lines in the country.

The plan calls for the replacement of the frequently bottlenecked Portal North Bridge over the Hackensack River, construction of a new, two-track Hudson River rail tunnel and rebuilding the existing century-old tube damaged by Superstorm Sandy.

‘The Nation’s Most Important Infrastructure Project’

The Obama administration had pledged support for the Gateway Program, but former President Donald Trump failed to honor the deal reached between the Department of Transportation and the governors of New Jersey and New York, which was to pay for half. The Trump administration also claimed the project did not qualify for federal funding and advocated for repairs only to the existing tube.

In May 2021, the Biden administration approved the required Environmental Impact Statement (EIS) on the Hudson River Tunnel project that was delayed more than three years.

Rep. Mikie Sherril (D-11) said the recent EIS approval, combined with additional funding for Gateway from the $1.2 trillion infrastructure bill,  puts New Jersey “in a strong position to make this project a reality for our region.”

“The Gateway Project, with the Hudson River Tunnels at its core, is the nation’s most critical infrastructure project. It will significantly improve commuting times and cut travel costs for New Jersey families, create thousands of good-paying jobs, and provide a return on investment to our communities of over 3-to-1,” she said.

After receiving a new rating in 2020 from the FTA, the $1.6 billion Portal North Bridge project broke ground in October 2021. The first span of the new crossing is expected to open in 2025, with full completion slated for 2027.

Gateway Development Corporation officials have said they hope to secure federal financing for the tunnel project by the end of 2022, which could enable construction to start next year. The entire project is estimated to be complete by 2035.

“The Gateway Tunnel and Portal Bridge projects are long overdue,” Pascrell said. “Now that we finally have a governor here in New Jersey and a President in Washington who are committed to rebuilding our infrastructure, New Jersey commuters have reason for hope.”

Menendez echoed the sentiment, saying, “After years of politically-motivated delays to derail Gateway by the former administration, I now could not ask for better federal partners who are committed to building new Hudson rail tunnels, completing the Portal North Bridge, and getting the entire Gateway Program done.”

Murphy: ‘Closer Than Ever’

Gov. Phil Murphy, a fellow Democrat, thanked the White House and “our Congressional delegation led by Senators Menendez and Booker for making Gateway a priority so we can make it a reality.”

In a statement Murphy said, “We are closer than ever to securing a fairly and fully funded Gateway Program and beginning the work of delivering the safe and modern infrastructure our people and economy deserve.”