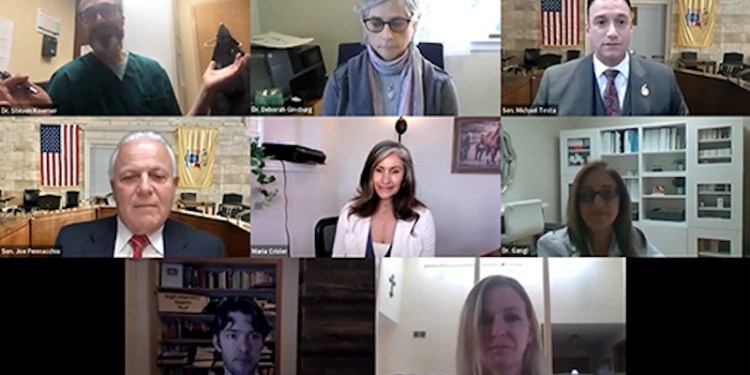 State Sen. Joe Pennacchio (R-26) wants Gov. Phil Murphy to drop his vaccine mandate for healthcare workers and he is pointing to a newly released study from the federal Centers for Disease Control and Prevention to make his case.

The GOP lawmaker said the Murphy Administration is ignoring evidence supporting the efficacy of natural immunity in people who have recovered from COVID.

“The governor and his health commissioner are missing a crucial variable in their COVID spread equation,” said Pennacchio. “People who have survived the virus have a natural defense against future infections. It is the body’s way of protecting itself, and with the rampant rate of transmission we’ve seen in the past few weeks, there are many more residents walking around with powerful antibodies.”

On Jan. 19, Murphy signed an executive order requiring health care workers in New Jersey to be fully vaccinated and boosted against COVID-19, or face termination. The governor said all healthcare workers covered by the order will need to be vaccinated by the dates outlined in the order and there no longer will be an option “to submit to testing as an alternative to vaccination.”

The CDC release pointed to by Pennacchio was a study of 1.1 million COVID-19 cases and hospitalizations in New York and California during May 2021 through November 2021. Researchers found that people who had previously been infected with COVID-19 were better protected against the Delta variant than those who were vaccinated alone.

But CDC qualified the results in noting that protection against Delta was greatest among those who were both vaccinated and had survived a previous COVID-19 infection. Least-protected, according to the study, were people who had never been infected or vaccinated.

The study was done before the Omicron variant emerged, “for which vaccine or infection-derived immunity might be diminished,” the report noted. Additionally, the report noted that booster shots were not yet widely available.

Moreover, authors of the study wrote, “this analysis did not include information on the severity of initial infection and does not account for the full range of morbidity and mortality represented by the groups with previous infections.”

For Pennacchio, the biggest takeaway from the CDC study was the findings confirming that natural immunity to COVID “is real, it is effective, and it is equal or superior to vaccinations.”

“Mother Nature is already doing more to stop the virus than the Governor’s renewed vaccine push could hope to achieve,” the State Senator said, who also promoted research from Israel, which he said, “found natural antibodies in recovered COVID patients to be extremely effective.”

“Once again, we’ve seen an overly dramatic action by the Administration, but the science tells us it is not necessary,” Pennacchio said. “The aggressive policy will inevitably contribute to an already dangerous staffing shortage in many hospitals.”

‘Essential That We Do Everything We Can’

Murphy defended his action, stating “With the highly transmissible Omicron variant spreading across the country and New Jersey, it is essential that we do everything we can to protect our most vulnerable populations.”

“With immunity waning approximately five months after a primary COVID-19 vaccination, receiving a booster dose is necessary to protect yourself and those around you,” he said. “It is critically important that we slow the spread throughout our healthcare and congregate settings in order to protect our vulnerable populations and the staff that care for them.”

Healthcare workers in the Garden State continue to point to staff shortages—an issue that both Murphy and his state health commissioner, Judy Persichilli, acknowledged at a Dec. 8, 2021, press briefing, where Persichilli said that hospital workers are suffering burn-out almost two years into the COVID pandemic and many nurses are aging out of their jobs.

The push to include national immunity in health care policy is not new from State Republicans—Pennacchio and State Sen. Michael Testa (R-1) held a hearing in December 2021 to discuss natural immunity from COVID.

In November 2021, the two GOP state senators introduced legislation (S 4136) that would allow schools, employers, restaurants, and other businesses to accept an individual’s “verbal confirmation” that they have natural immunity due to a COVID-19 infection “to satisfy any vaccination or testing requirement that may be imposed as a condition of employment or to receive services, participate in activities, attend school or college, or gain admission to a place or venue,” a press release said.

“Just as the virus has adapted with variants, it is about time for the state’s COVID policies to adapt,” said Testa. “Real people are being fired, kicked out of college, and discriminated against in various ways due to vaccine mandates imposed by Governor Murphy and others.”

“It’s modern segregation that’s not the least bit based on the latest science. Our bill is an effort to save more than a million New Jerseyans with natural immunity from unnecessary harm, discrimination, and compliance burden,” Testa said.

As for those that have passed, the state reported 143 confirmed deaths, bringing that total to 28,186. The state listed probable deaths at 2,907, bringing the overall total to 31,093. State officials noted 75 deaths occurred in the last 24 hours of reporting that have not yet been lab confirmed.

Health officials noted 562 long-term care facilities are currently reporting at least one case of COVID-19, accounting for a total of 24,654 of the cases, broken down between 11,266 residents and 13,388 staff.

The state’s official death total will now be reported as those that are lab confirmed, sits at 8,971 on Jan. 25. The facilities are reporting to the state 8,369 residents deaths and 148 staff deaths.

In regards to outbreaks related to in-school transmissions as of Jan. 26, the state has tracked 432 school outbreaks and 2,683 cases linked to those outbreaks since the 2021/2022 school year starting Aug. 7, up 26 outbreaks and 318 cases from the week previous.