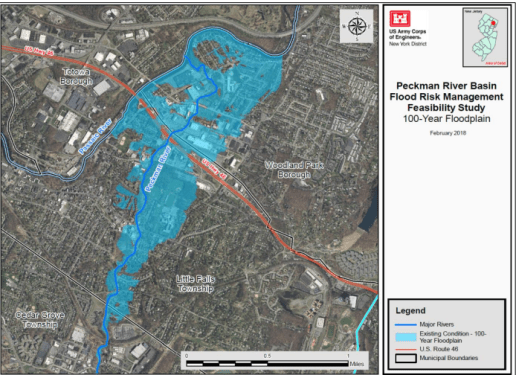 Reps. Bill Pascrell Jr. and Mikie Sherrill both lauded the news that the U.S. Army Corps of Engineers (USACE) would supply $146.2 million for the Peckman River Basin project.

“Our communities and families across Northern New Jersey have faced the dire, and sometimes deadly impact of devastating flooding in this region for far too long. This full federal funding for the [USACE] to address and mitigate the flooding in the Peckman River Basin could not come at a more critical time,” said Sherrill.

The funding would include $6.7 million to complete the New York/New Jersey Harbor Tributary study, which was conceived after Superstorm Sandy and halted during the Trump Administration.

Flooding on the Peckman River

“We will never forget the damage Superstorm Sandy inflicted upon our state. Our Meadowlands communities like Moonachie and Little Ferry suffered tremendously…We asked for these dollars because we want to see the potential options to mitigate future flood and storm damage, provide environmental restoration, and address coastal resiliency,” said Pascrell.

Flooding from the Peckman River has caused multiple flash flooding events in District 11 towns like Woodland Park and Little Falls, with the most recent event occurring in September 2021 during Tropical Storm Ida.

“I’ve brought the Army Corps of Engineers to visit some of these flood zones and hear the stories of residents who are impacted, discuss the issues with Mayors and local officials and see the damage it has done. ACOE’s work will go an incredibly long way in ensuring that our region is safer and more resilient for decades to come,” said Sherrill.

The project plans to mitigate flooding through a combination of infrastructure efforts, including a diversion culvert connecting the Peckman and Passaic Rivers. Additionally, it would employ associated weirs; levees and floodwalls; channel modifications; and nonstructural measures.

“When I represented our neighbors on the river, I got the Army Corps involved at the Peckman River after we saw the tragic impact of rising water on our flood prone communities in North Jersey. Hurricane Floyd rendered extensive damage and left our community heartbroken,” said Pascrell. “I was proud to work alongside my colleague Representative Sherrill to secure these essential funds to protect North Jersey against future storms.”

Little Falls Mayor James Damiano said the funding represented a long-term solution for flooding in the town, and that it would provide much-needed relief for residents.

“No longer will the residents in the Jackson Park section of town need to live in fear that their homes, their belongings, or their lives are in danger from the Peckman River,” he said.

“This has been a priority since 1999, after Hurricane Floyd. A man lost his life due to flash flooding from the Peckman and just last year we lost another life, almost exactly 22 years later. We need to get this done before we see any more loss,” he said.